(Minghui.org) So far, over 60,000 criminal complaints charging Jiang Zemin for the 16-year-old persecution of Falun Gong have been filed with the authorities in China.

In one town in Shanxi Province--Xinzhou City--123 complaints were filed from June 26 to July 2 alone.

From government officials to laborers, from factory workers to professionals, all the practitioners who filed lawsuits have benefited from the practice of Falun Gong. But after the persecution started in July 1999, many were arrested, detained, sent to forced labor camp or brainwashing centers, or imprisoned. In addition, they suffered financially and their families were torn apart. Below are two examples.

Mr. Chen Jianbin, 34, and his entire family are grateful for Falun Gong: his intestinal disease disappeared, his mother recovered from kidney disease, and his wife's migraines never returned. Because everyone was following the principles of Truthfulness-Compassion-Forbearance, their family was happier than ever.

But Mr. Chen was later arrested and detained many times for his belief. In detention centers, brainwashing centers, labor camps, and prison, guards forced him to stand straight for long periods of time, handcuffed him, and shocked him with 150,000-volt or 50,000-volt electric batons until their batteries died. Mr. Chen's right wrist was damaged so badly that he cannot do heavy labor even today. 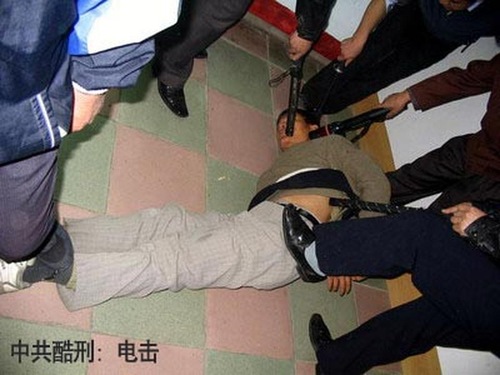 His mother, Ms. Wang Cuiping, also suffered tremendously. When she was detained, she was often put in solitary, force-fed, handcuffed, beaten, and shocked with electric batons. She was emaciated and in critical condition. In December 2004 she was sent to the Shanxi Province Women's Prison for a term of three years.

Mr. Chen, his wife, his mother, and his mother-in-law have now all filed criminal complaints against Jiang.

Ms. Di Meiyun, 55, is supermarket cashier. After she went to Beijing to appeal for the right to practice Falun Gong, officials where she worked confiscated her Falun Gong books and detained her numerous times. She was sent to to a labor camp in 2001 for two years and to prison in 2009 for four years.

The mistreatment has left her severely impaired. “Both my mother and my sister-in-law were very worried about me, and they later died. My sister-in-law wasn't even 50. Although my son found a job in Shanghai after graduating from college, he had to resign to take care of me. My father, already in his 80s, lives in fear and is always stressed.”

Ms. Sun Xiufeng used to have bile stones, stomach problems, and hyperosteogeny (excessive bone growth). They all disappeared within three months after she began to practice Falun Gong.

After Jiang Zemin began to suppress Falun Gong, however, Ms. Sun was arrested and sent to a labor camp, where she was beaten, tortured, and humiliated. Besides mental and physical suffering, she also experienced financial loss after she was terminated from her job.

Both Ms. Sun's husband and son were also affected by the persecution, and their lives were seriously disrupted.

The persecution has led to the deaths of thousands of Falun Gong practitioners during the past 16 years. More have been tortured for their belief and even killed for their organs. Jiang Zemin is directly responsible for the inception and continuation of the brutal persecution.