(Minghui.org) Falun Gong practitioners in Montreal and its neighboring cities gathered in Chinatown on July 4, 2015 to show support for the lawsuits filed against former Chinese dictator Jiang Zemin, who ordered the brutal persecution of Falun Gong in China.

Mr. Wei, a coordinator of the event, said the number of criminal complaints filed against Jiang has increased rapidly. “Over 40,000 have been submitted to the Chinese authorities as of July 1. This happened because millions of Falun Gong practitioners have been arrested and detained during the suppression, and at least thousands of them have become victims of organ harvesting from live prisoners.” 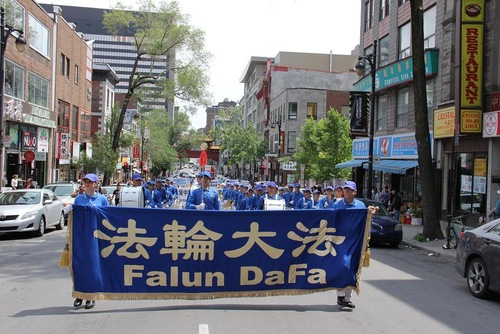 Parade at Montreal Chinatown on July 4, 2015

Mr. Sun, who recently came from China, said his family suffered tremendously during the suppression. “We were arrested, our home was ransacked, and our ID cards were confiscated. Things like this happened over and over again. Both my father and father-in-law died because of the persecution. My mother, too, was tormented.”

This is just what happened to one family. Tens of millions of practitioners began facing pressure from work, life, and family after the Chinese regime blanketed the country with hate propaganda against Falun Gong.

“By suppressing Truthfulness-Compassion-Forbearance, Jiang and his regime is undermining the moral foundation of this society. That is why everyone needs to pay attention to this,” Mr. Sun said. 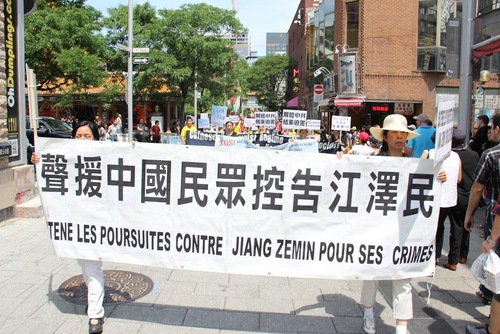 One banner in the parade (in French): Support lawsuits against Jiang Zemin for his crimes

Four other practitioners also gave testimonies of abuses they suffered in China. After Ms. Yu was arrested and detained for her belief, she was forced to stay away from home. Although she was able to come to Canada, her husband could not withstand the pressure and died in 2011.

Ms. Bu from Jiangsu Province was kept in both a detention center and a labor camp because she practiced Falun Gong. “Guards forced 30-pound foot shackles on me. Besides the physical torture, the mental stress was also unbearable. Every day, officials hit me in the face before interrogation, sometimes with leather boots.”

The mistreatment worsened after her labor camp term was extended by one year. “I was shocked with electric batons, put in solitary confinement, force-fed, deprived of sleep and access to a toilet, and forced to do over 10 hours of labor [per day].”

Ms. Bu said she just wanted to be a better person through practicing Falun Gong. “I am 70 years old now, and I cannot even go back home because of Jiang and his persecution policy. He has harmed so many people and must be brought to justice.”

Another coordinator of the event, Ms. Yang, said the criminal complaints against Jiang have a far-reaching significance on China's future. “Decades of violence and propaganda by the Chinese Communist Party has destroyed trust among citizens. With no faith in conscience and traditional values, the moral degeneration has been rapid and serious.”

She added that through lawsuits against Jiang, more people will learn about the crimes committed by Jiang and the Communist Party, including the Tiananmen Square self-immolation hoax and other hate propaganda against Falun Gong practitioners.

One Chinese immigrant said that he admires practitioners. “They [Falun Gong practitioners] have suffered so much for their belief. I remember seeing on a poster the tragedy of Ms. Gao Rongrong, a beautiful woman disfigured and tortured during the persecution.. I know there are many more sad stories like that. I support Falun Gong and hope all practitioners well.”

“Snapshot of Falun Gong Practitioners Whose Copies of Lawsuits Against Jiang Zemin Were Received by Minghui on June 26-27, 2015”