(Minghui.org) Two bills (SF2090, HF2166) expressing concerns over systematic, state-sanctioned forced organ harvesting from Falun Gong practitioners, were submitted in April, to committees in the House and Senate of Minnesota. Shortly after, the Chinese Consulate in Chicago pressured state legislators, attempting to block the bills before they passed the subcommittees.

Letters written by the Chicago Chinese Consulate to Minnesota legislators were filled with lies, denials, and slanderous words. Some consulate officials tried to schedule meetings with the authors of the bills.

“We absolutely don't believe anything in this letter. You don't need to worry about it. We support you just like before!” said an assistant to a legislator, as he handed the letter to a Falun Gong practitioner who is his constituent.

Another assistant said that she had worked in the legislature for nearly 20 years, and understood the nature of the Chinese Communist Party, and how it operates.

An assistant told practitioners that the consulate's letter was read at an informal party, and that it created a good laugh. 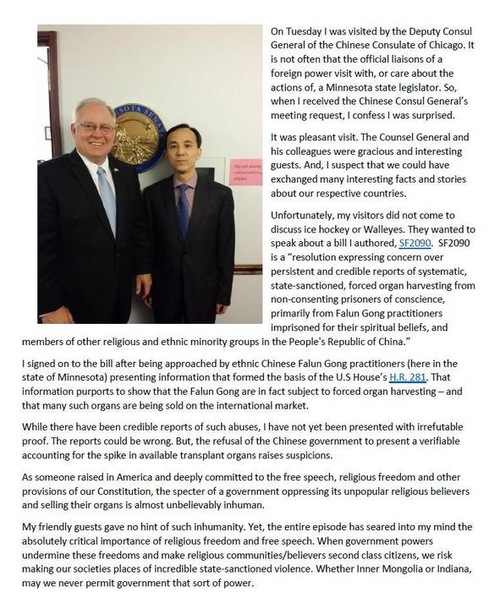 A post on Senator Dan D. Hall's website about the “surprising” meeting with the Chinese Consulate's Deputy Consul General.

He commented, “As someone raised in America and deeply committed to the free speech, religious freedom and other provisions of our Constitution, the specter of a government oppressing its unpopular religious believers and selling their organs is almost unbelievably inhuman.”

The letter written by the consulate has raised the profile of the legislation with lawmakers.

Ms. Zhao, director of the Falun Dafa Association of Minnesota, said, “This issue relates to everyone, transcending the geographical boundaries. Forced organ harvesting from Falun Gong practitioners ought to receive more attention in the international community. It is an inhuman crime, a challenge to any cultures in the world. It is against any accepted beliefs and moral standards of mankind.”