Liaoning Woman's Prison is notorious in torturing practitioners. At least 38 practitioners have died as a result of persecution there, and more than 110 practitioners are still being held.

Other inmates monitor practitioners around the clock during the first month of imprisonment. They try to brainwash them, they beat them and shock them with electric batons. They do all of this in attempts to coerce the practitioners to renounce their beliefs.

Family visits aren't allowed because they would disrupt the brainwashing efforts. 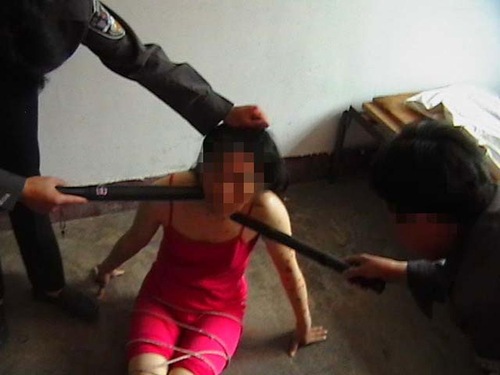 After the first month, the torture and brainwashing will continue for another two months if the practitioner has refused to give up Falun Gong.

One described the experience this way: “Guards cuffed my hands and hung me up in a window. They stripped me of all my clothes and wrote Master Li Hongzhi, the name of the founder of Falun Gong, all over my body. I was tremendously pained because of this humiliation of Master Li. I had reached the end of my tolerance, because they also asked me to stomp on a photograph of Master Li. Exhausted and at wits end, I reluctantly agreed to no longer practice Falun Gong.”

The prison established a clothing manufacturing plant inside its walls. Another practitioner who was held for nine years in that prison was bedridden due to the torture. She said that despite being bedridden she had to work on the manufacture of clothes.

Practitioners are completely isolated from the outside world during the first three months.

“When Help is Not Helpful”