(Minghui.org) Falun Gong practitioner Mr. Wang Liangqing from Beijing filed a criminal complaint against former Chinese leader Jiang Zemin on May 15, 2015. The lawsuit was sent via express mail to the Supreme People's Procuratorate. 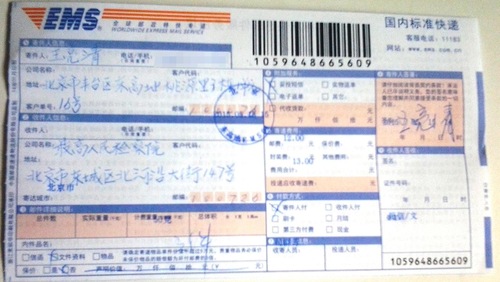 Mr. Wang mailed his complaint to the Supreme People's Procuratorate via EMS.

His complaint states that because Jiang Zemin initiated the persecution of Falun Gong, thousands of practitioners, including himself, have suffered severely. He is accusing Jiang of illegal detention and imprisonment and causing his financial losses and the illegal termination of his employment.

Held in Labor Camp for His Belief

From August 1999 to May 2000, Mr. Wang was arrested three times and detained in Fengtai Detention Center after he protested at Tiananmen Square in Beijing for the right to practice Falun Dafa.

From July 2000 to December 2001, he was incarcerated in Tuanhe Forced Labor Camp.

In December 2000, he was fired from his job at the Rocket Launch Technology Institute.