(Minghui.org) Falun Gong practitioners were invited to participate in the annual parade in the Carnival of Cultures in Bielefeld, Germany on June 6, 2015. The colorful parade is a part of the international festival and include masks, costumes and fantastic installations. 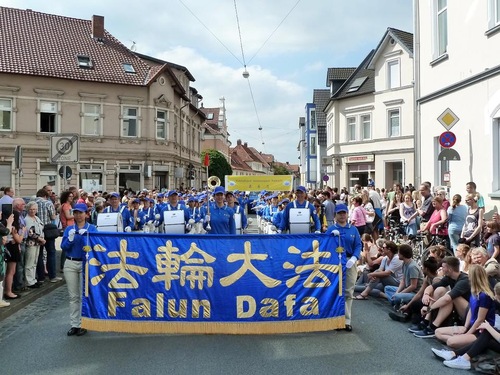 Practitioners from all walks of life participated to share the beauty of the practice and to showcase its principles of Truthfulness-Compassion-Forbearance.

The announcer said, “These Falun Gong practitioners wish to present the values of Truthfulness-Compassion-Forbearance, rooted in traditional Chinese culture, through music and dance. Unfortunately, Falun Gong is persecuted in China. In contrast, people can freely practice Falun Gong in more than 100 countries in the world except China.”

An undergraduate student commended the band wearing the same costumes, “Very good. I did not know Falun Gong before. Now I would like to learn more about it. Why is it banned in China? I believe many spectators have the same question. Not everyone knows why. They would like to know more.”

A spectator in his 60s commended, “Splendid! Some practitioners meditated on the float. It is great that they can calm down and concentrate in such a noisy environment. I have to say it is my first time to see such Chinese people. They are so peaceful. Very good. It is because of Truthfulness-Compassion-Forbearance that they are different from other groups in the parade. I like it very much.”

“Showing the People of Northeastern Thailand the Beauty of Falun Dafa”