(Minghui.org) Fifteen Senators and Members of Parliament attended a celebration of the upcoming 16th World Falun Dafa Day on Parliament Hill in Ottawa. The lawmakers praised the teachings of Falun Gong, Truthfulness-Compassion-Forbearance, for their contribution to society and encouraged practitioners to continue their peaceful resistance against the persecution in China. 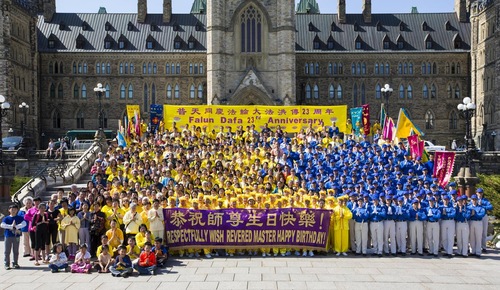 Practitioners gather in front of Parliament Hill to celebrate the 23rd anniversary of the public introduction of Falun Gong. 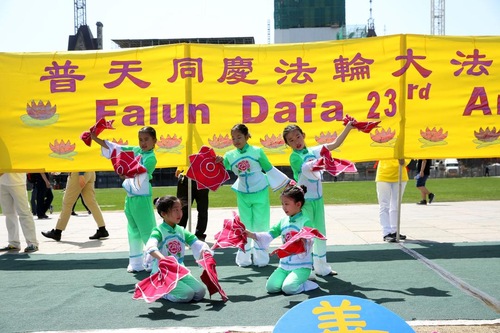 Children perform a handkerchief dance at the celebration. 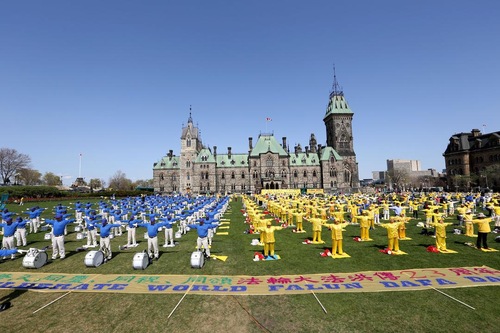 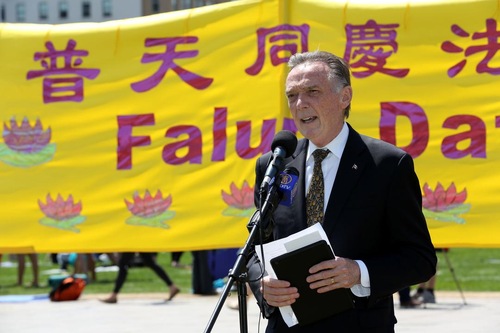 Conservative MP and former environment minister Peter Kent said Falun Gong has brought spiritual fulfillment and good health to millions of people around the world through its gentle exercises, meditation, and core tenets of truthfulness, compassion, and forbearance.

“Practitioners of Falun Gong in Canada are fully law-abiding citizens and residents who contribute significantly—greatly I must say—to Canadian society,” he said.

In his speech, Mr. Kent mentioned a practitioner recently sentenced in China, Li Xiaobo, who is the father of a Canadian citizen. He said the Canadian government consistently calls on the Chinese regime to protect the rights of all Chinese citizens, including Falun Gong practitioners.

Several MPs emphasized on the importance of the principle of Truthfulness, Compassion, and Forbearance. 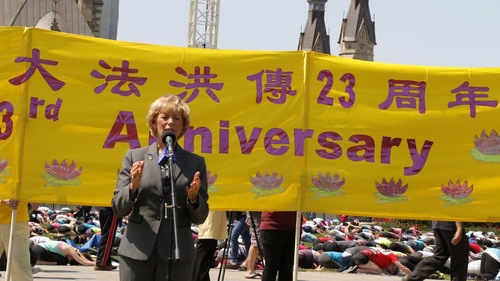 MP Judy Sgro said this principle bodes well for Canada and the world.“Because when the world follows the Falun Dafa three key words—truth, compassion, and tolerance—the world will be a better place,” she said. 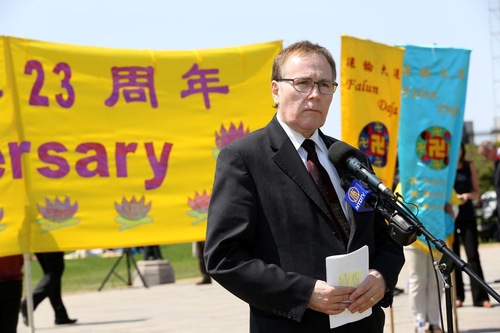 “You can count on me for support in promoting the values of truthfulness, compassion, and tolerance that I know that you promote throughout the world,” said Conservative MP Stephen Woodworth, a founding member of the Parliamentary Friends of Falun Gong. 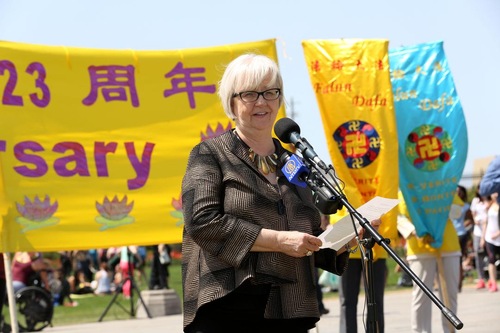 “Truth, compassion and tolerance. What a lovely genre to put forth in front of people all over the world. So, congratulations to the Falun Dafa practitioners all across Canada on the 23rd anniversary of the introduction of Falun Dafa to the public,” she said.

“Falun Dafa has brought commendable principles, as I spoke about earlier, of truthfulness, compassion and forbearance to Canada and to the world. Through the pursuit of spiritual enlightenment, harmonization and peaceful exercises, millions of Falun Dafa practitioners have received a healthier mind, body and spirit.” 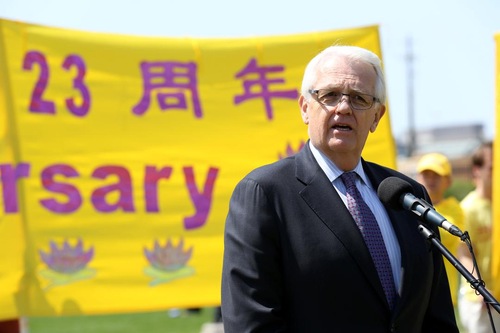 Conservative MP John Carmichael says the principle of Truthfulness-Compassion-Forbearance are “values that are very consistent with Canada, our government and what we believe.”

He said: “We’d like to see that spread across the world.” 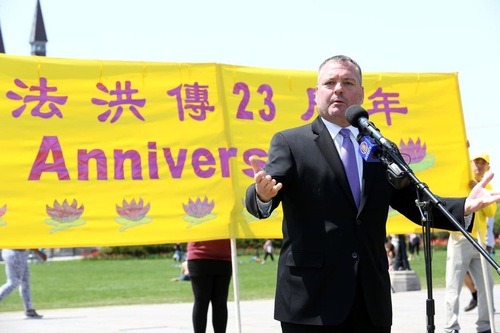 Conservative MP Brad Butt praised Falun Gong practitioners for sending a strong message to the world about the importance of human dignity through their ability to practice their faith, and that “Canada is a better stronger country because of Falun Dafa practitioners.”

He said: “This is your Parliament Hill. This belongs to all of us as Canadians and it’s so wonderful that we can have gatherings like this that are peaceful, and are compassionate that send out a message to the world about the great Canadian values that we all share.” 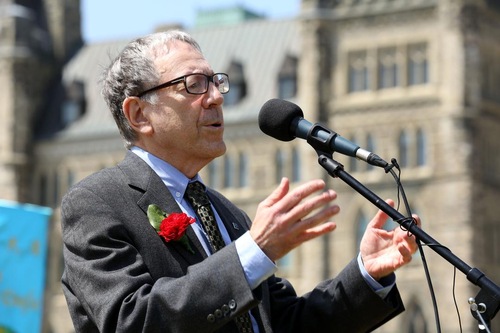 Liberal MP Irwin Cotler, who is also the vice chair of the Parliamentary Friends of Falun Gong, called upon the Chinese government to “respect the very values that underpin the Falun Dafa–the values of truth and compassion and tolerance and forbearance...values that underpin me and my family in our own works since involvement with Falun Gong which goes back 16 years ago.”

Mr. Cotler said, “that is the whole nature and purpose of the Falun Dafa–you bring the benefits of health, of culture, of the values of compassion and truth and forbearance, for humanity as a whole. We share it with you, we will work with you, and we will not relent until the rights of the Falun Gong along with the rights of all the Chinese are secured in accordance with law and our common humanity.”

Standing Together to End the Persecution

All of the MPs condemned the 16-year long persecution of Falun Gong in China and promised to continue their efforts to end it. 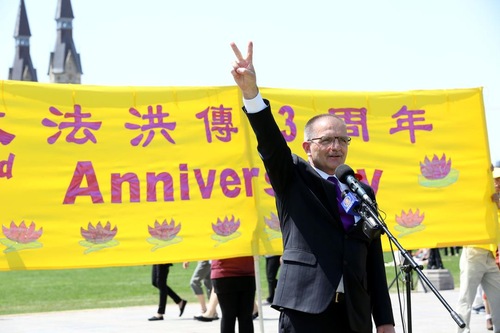 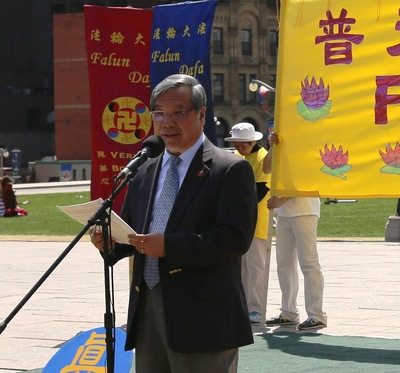 Conservative Sanator Thanh Hai Ngo considers the persecution of Falun Gong “one of the biggest crimes against humanity of the century.”

He said, “Canada is a strong country supporting the human rights and protecting human rights, religious freedom, and the rule of law. The Chinese Communist government has continued a campaign of persecution against spiritual practice of Falun Dafa for far too long against those who simply wish to practice tenets of truthfulness, compassion and forbearance.”He called upon the attendees to stand with Falun Gong practitioners, who are killed for their organs in Chinese prisons and detention facilities. 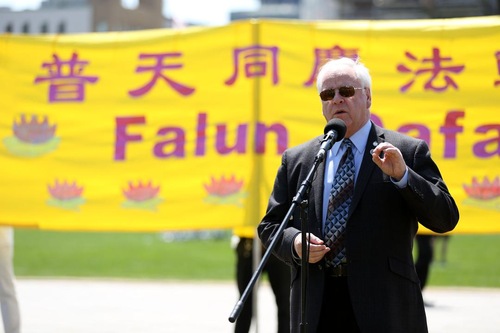 MP Wayne Marston of the New Democratic Party condemned the persecution. “How can you deal in human rights in Canada from a perspective of a free country, and not look to places where people are persecuted as the Falun Gong has been in China? It is very clear that China has one of the most horrible records in the world of mistreatment of its own citizens.” 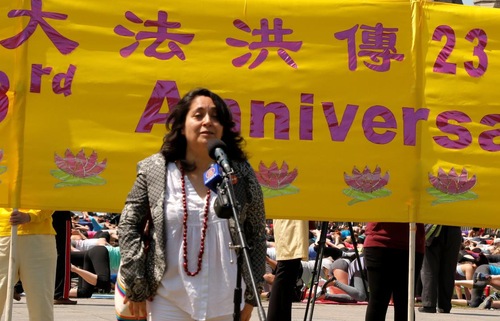 MP Ayala said she firmly believes in the liberty of expression and religion. She said, “I find it terrible that there are people which will be persecuted because they have a way to see life differently. I find terrible that someone would be in prison because they live differently. So you can count on me in the sense that I will always do everything in my power so that people can express themselves.” 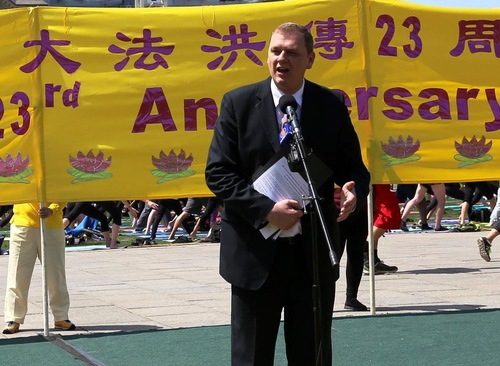 MP Sylvain Chicoine said in his speech, “Of course, we denounce the persecution which you are victims and we encourage you to continue your activities and we fully support you in your rededication about the fact that you are a group which represent no danger, a pacific group.” 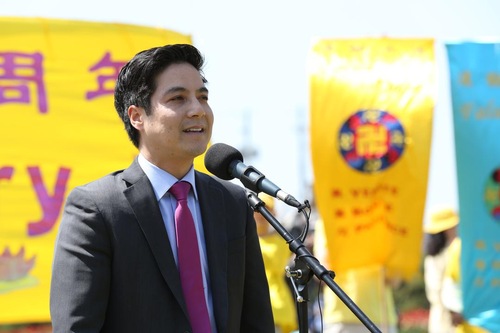 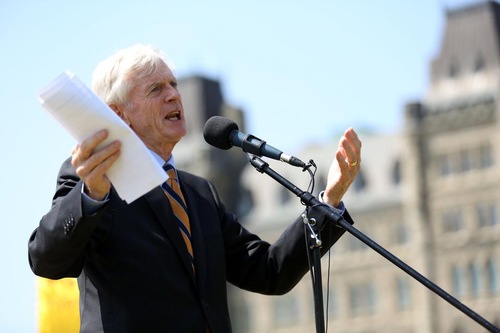 Former MP David Kilgour discussed the state-sanctioned organ harvesting from Falun Gong practitioners in China. He and his colleague David Matas drew the conclusion from the evidence they collected that “for 41,500 transplants done in the years up to 2005, the only plausible explanation for sourcing is Falun Gong.”

“Carrying the Torch Outside of China” 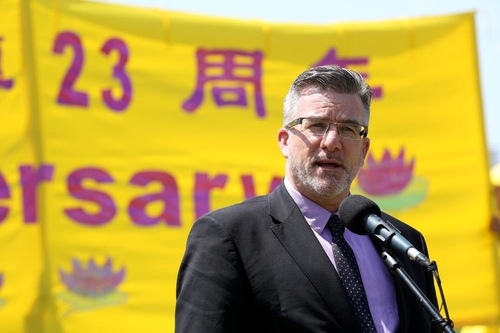 MP Craig Scott said, “I’d like to commend all of you for carrying the torch outside of China. Your efforts to educate and make everybody more aware of the persecution in China effectively since 1999 has made a huge difference to that awareness.”

“I think it's important for you all to know that apart from your main purpose being here and your main purpose in life to follow your spiritual beliefs, you all are engaged in a major effort to increase consciousness to another level. Your struggle is not just a struggle for Falun Dafa, for your brothers and sisters, it's a universal struggle.” 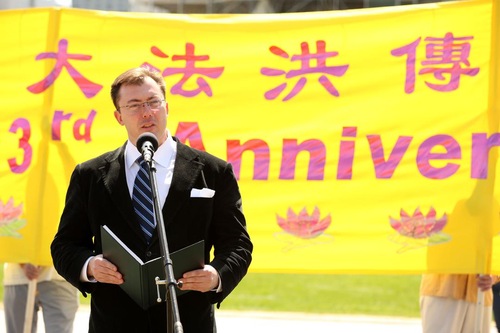 “You always give me tremendous inspiration when I see you gathered here on the lawn in Parliament Hill and I thank you from the bottom of my heart for you being here today,” said MP Rob Anders.

He believes that the best way to help to change the situation is “to change the hearts and the minds of the regime there [in China], to open them up to the light, and to change the circumstances of those practitioners who suffer behind this bamboo curtain.”

“I think of the things that we need to do that you have been doing: the demonstrations, the vigils, the petitions, the boycotts, sit-ins, occupations, creation of parallel institutions. Some of these things we’ve done. Other things I think could be very useful.”