(Minghui.org) News about the Chinese Communist Party's (CCP) organ harvesting from living prisoners of conscience has been receiving wide coverage in the United Kingdom. Mainstream media and medical organizations have recently paid attention to this critical issue, and mainstream media outlets have reported on the CCP's organ harvesting atrocities. 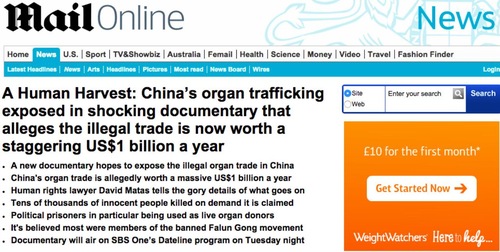 The film is written, directed, and produced by filmmaker Leon Lee, principal of Flying Cloud Productions in Vancouver. The executive producer is Jason Loftus of Toronto-based Mark Media. The film recently received a Peabody Award for Documentary, which will be handed out on May 31 at the 74th Annual Peabody Awards in New York. The prestigious George Foster Peabody Award, established in 1940 to recognize distinguished achievement and excellence in broadcast and media production, is among the most esteemed and coveted in the industry.

The Daily Mail report on April 6 by John Carney was titled “A Human Harvest: China’s organ trafficking exposed in shocking documentary that alleges the illegal trade is now worth a staggering US$1 billion a year.”

The article was supplemented with images and a short video describing the state-sanctioned organ trafficking from prisoners of conscience, especially Falun Gong practitioners. The story began: “When reports first emerged from China in 2006 that state-run hospitals were killing prisoners of conscience to sell their organs, it seemed too horrible to be true.

“However, a new documentary is about to blow the lid on the illegal organ trade that is now allegedly worth a staggering US$1 billion a year. This despite the fact 10,000 organs are transplanted in China every year, yet there are only a tiny number of people on the official donor register.”

The article discussed how Canadian human rights lawyer David Matas and former Member of Parliament David Kigour conducted a thorough investigation and reached the incredible conclusion that jailed Falun Gong practitioners are used as live donors for the illegal organ trafficking. “The damning evidence they uncovered suggests that tens of thousands of innocent people have been killed on demand to supply an ongoing illegal organ transplant industry.”

The article brings up the UN's criticism of China for using death row prisoners as unwilling organ donors and discusses the laws being enacted around the world to prevent organ tourism. Mention was made of the successful legislation in Israel and Spain.

Mention was also made of the US Congress and European Parliament passing resolutions condemning the Chinese regime's practice of forced organ harvesting from prisoners of conscience.

The second Daily Mail article on April 8, by Julian Robinson, was titled “Livers, kidneys and even corneas removed from 11,000 live political prisoners WITHOUT anaesthetic every year in China, claims documentary.”

This article described the investigation results of Mr. Matas and Mr. Kilgour, covered in the documentary film. The article referred to Mr. Matas observation: “Somebody's being killed for the organs. There's no other way to explain what's happening.

“Everywhere else in the world it would be months and years [to receive an organ]. When you book a transplant in advance, for a heart transplant, and you go to China and you get a transplant within a few days.”

The article stated, “Human rights lawyers involved in the investigation want further action with those responsible brought before the International Criminal Court in The Hague.”

Besides the Daily Mail stories, the International Business Times also posted news about the documentary. 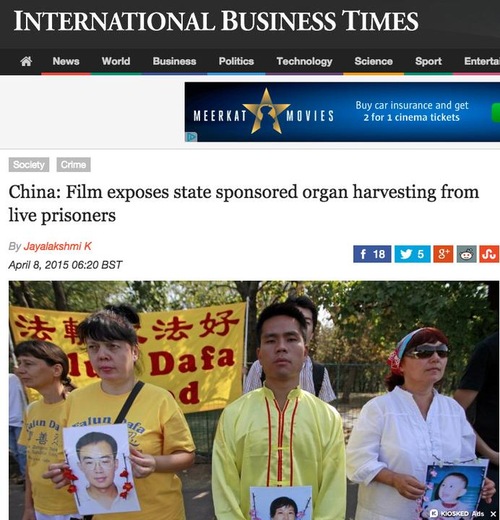 The Spring 2015 issue of the Faculty of Medicine Community Blog, Imperial College London carried a story on a presentation at the UK Parliament on unethical organ harvesting from prisoners of conscience in China. 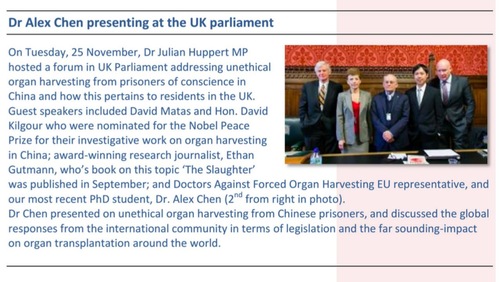 Screen shot from the Faculty of Medicine Community Blog, Imperial College London, mentioning Ph.D student Alex Chen presenting at the UK Parliament on organ trafficking in China in last November. He was invited to give the presentation in a seminar sponsored by DAFOH (Doctors against the forced organ harvesting).

On the website for Imperial College London's WHO Collaborating Centre for Public Health Education and Training, news about Alex's presentation was also posted. The announcement states, “Dr. Chen presented on unethical organ harvesting from Chinese prisoners, and discussed the global responses from the international community in terms of legislation and the far sounding-impact on organ transplantation around the world.” 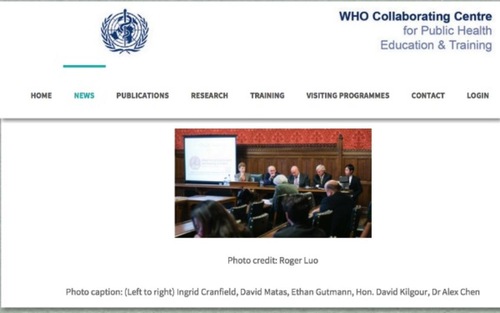 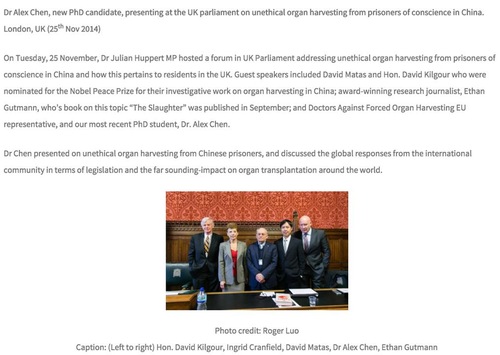 Screen shots of news on Alex Chen's presentation at the UK Parliament on unethical organ harvesting in China, posted on the website for WHO Collaborating Centre for Public Health, Education and Training, Imperial College, London.

“A Trial That Should Never Have Taken Place”