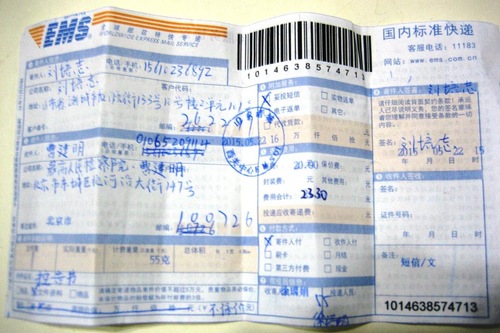 Ms. Liu sent her complaint to the Supreme People's Procuratorate, charging Jiang with her unlawful detention and torture for practicing Falun Gong.

The 43-year-old woman from Zhucheng City, Shandong Province, charged Jiang with dereliction, libel, wrongful imprisonment, and deprivation of citizens' freedom. She is seeking one million yuan to compensate for the economic losses and mental suffering incurred during her years of detention for refusing to renounce her belief in Falun Gong at the hands of communist authorities.

Ms. Liu was arrested from home on March 19, 2009 and detained for more than one year. She was force-fed when she went on a hunger strike to protest her illegal detention.

Her ordeal continued when she was later sentenced to three and half years in prison for exercising her constitutional right to practice Falun Gong. Prison guards deprived her of food and sleep, and forced her to slander the founder of Falun Gong against her will, as a brainwashing tactic.

During Ms. Liu's imprisonment, her mother died of grief, and her young daughter was taunted at school for being a “criminal's child.”

Under his personal direction, the Chinese Communist Party established an extralegal security organ, the “610 Office,” on June 10, 1999. The organization overrides police forces and courts in carrying out Jiang's directive regarding Falun Gong: to ruin their reputations, cut off their financial resources, and destroy them physically.