They were taken to the Yizhou Town Police Station and brutally tortured.

Director of the police station Zheng Qing shocked their heads and arms with high voltage electric batons. Other officers slapped and punched the practitioners' faces repeatedly.

Ms. Ren's face was sprayed with an unknown substance. She started foaming at the mouth and became dizzy. 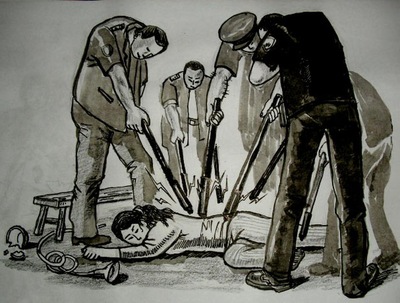 The police put their fingerprints on some of their documents against their will.

Ms. Zhang and Ms. Ren were forced to undergo a medical exam at a hospital that night and had their blood drawn. They were then taken to Yi County Detention Center.

When Ms. Ren's family visited her at the detention center, other inmates had to hold her up, and she was sobbing. She was on hunger strike to protest the persecution.

Ms. Zhang and Ms. Ren were released after 12 days, but only after Director Zheng extorted 5,000 yuan from each of their families.

“My Whole Family Has Benefited from My Cultivation in Falun Dafa”