Parade in NYC Encourages Everyone to Condemn the Persecution

(Minghui.org) Office workers and others in Manhattan watched the 3-hour-long Falun Gong parade on May 14.

More than 8000 Falun Gong practitioners took off from United Nation headquarters on 2nd Avenue, walked down Grand Central through Times Square, and ended at the Chinese consulate on 12th Avenue.

The goal of the parade was to let people know about the practice of Falun Gong and about the brutal persecution of Falun Gong in China. Many people expressed their support for Falun Gong's peaceful resistance, condemned the state-sanctioned organ harvesting from Falun Gong practitioners in China, and called for an end to the persecution. 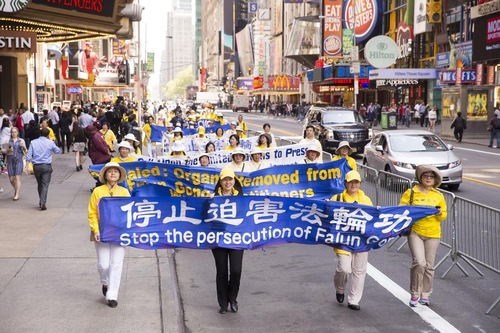 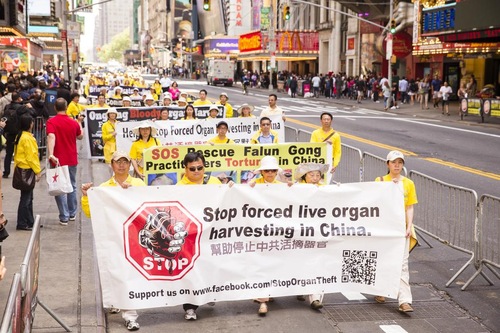 “Truth Is the Most Powerful Weapon.”

Charles J. Vorbach, the owner of an insurance company, waved to the practitioners in the parade.

“It is a peaceful group, nice to everybody. We need more people like them,” Mr. Vorbach said. 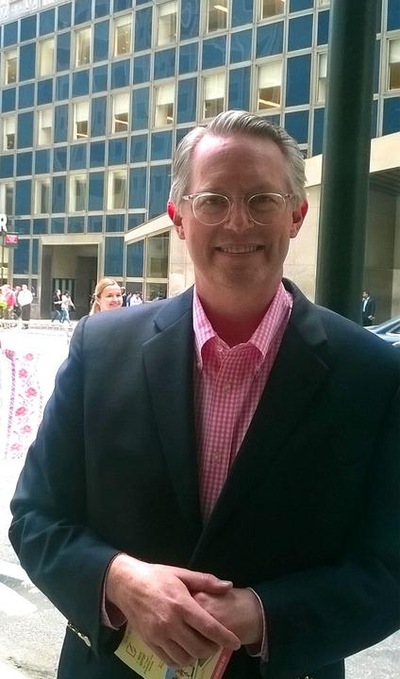 Charles J. Vorbach said that truth is the most powerful weapon.

“It is great that they fight for freedom of belief. Good beliefs are beneficial. We need more activities like this.” Mr. Vorbach had already heard about the persecution of Falun Gong in China. He commented, “The organ harvesting is really horrible. It is great that Falun Gong lets people know about this crime. Everybody should know the truth. Truth is the most powerful weapon.”

“I Feel the Peacefulness.”

Girish, an auditor in Manhattan, has a friend who practices Falun Gong. His friend told him about the parade. When he heard the drums of the Divine Land Marching Band, which led the parade, he left his office on 2nd Avenue and watched the whole parade. 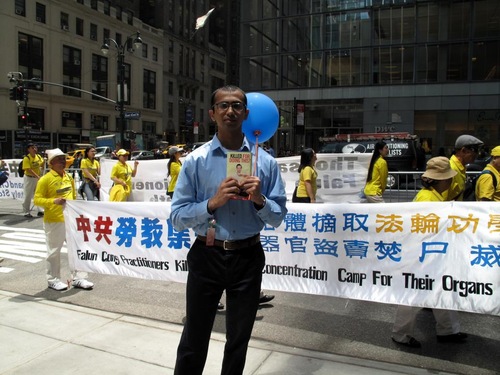 Girish, an auditor, wants to encourage more people to help stop the persecution of Falun Gong.

“The parade was excellently organized,” he said. “The messages it tries to convey are very clear. That is, 'stop the persecution, stop the organ harvesting, stop torturing Falun Gong practitioners, and give them the freedom to practice.

“The parade is very peaceful, and everybody in the parade is so polite,” Girish said. “It is horrible that such people are having their organs harvested against their will. It is a crime against humanity.”

Girish said that he would tell more people about Falun Gong and encourage them to help stop the persecution.

“Everybody Should Say 'No' to the Persecution”

A practitioner suggested that they should bring up this issue at their Model UN conference. Both girls agreed that was a good idea. 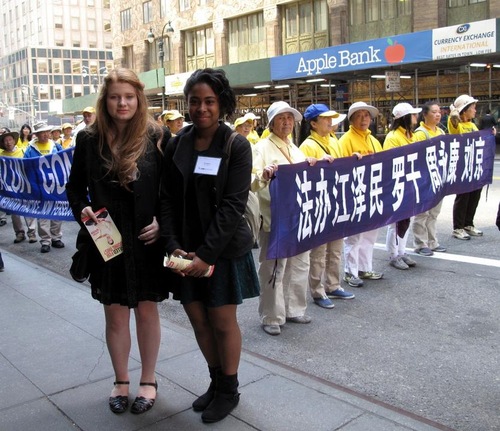 Jolly and Oliver, two high school students, wanted to bring up the persecution of Falun Gong at their Model UN conference.

“Nobody Should Be Persecuted for Their Belief.”

Harvey Rosengart, a retired lawyer, took pictures of the parade. He had heard about the persecution of Falun Gong in China and seen Falun Gong activities in New York. But this was the first time he had ever seen such a large scale parade.

“The parade is wonderful. So many people saw it today. I completely support their peaceful resistance. The persecution is really horrible and should be ended now. Nobody should be persecuted for their spiritual belief. It is just that simple.” 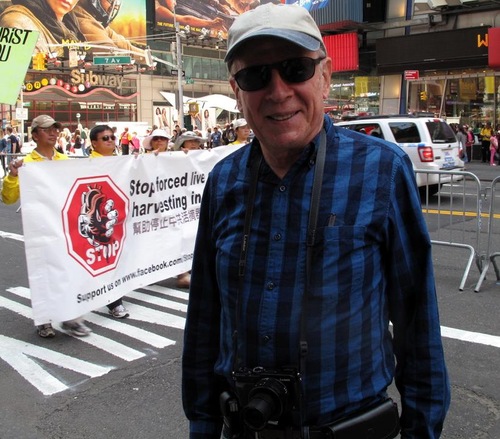 Harvey Rosengart, a retired lawyer, believes that nobody should be persecuted for their belief.

“We Should Stand Together Against the Persecution.”

Julia, whose apartment is on 2nd Avenue, invited a friends to watch the parade in front of her apartment building. She told her friend what she knew about Falun Gong.

“Falun Gong holds a parade every year, and I have watched them every year. This year, I invited my friend to join me,” Julia said. “The parade is great, because more people can learn from it. It is great that Falun Gong practitioners have a chance to freely express themselves.

“I know about the human right violations in China. We should stand together against the persecution. We should do what we can to help them.” 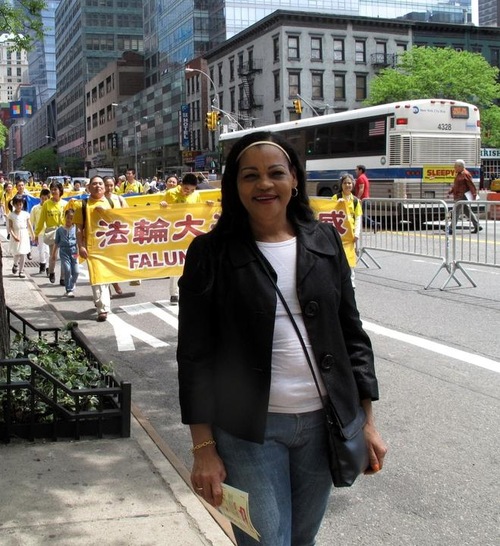 Julia, a local resident, said that it is great that Falun Gong practitioners have a chance to freely express themselves.

Moussa, a diplomat from the Republic of Chad, was pleased to see the parade. While taking video of the parade, Moussa said, “Falun Gong is a good practice. These practitioners are fighting for their freedom of belief. We should help them.” 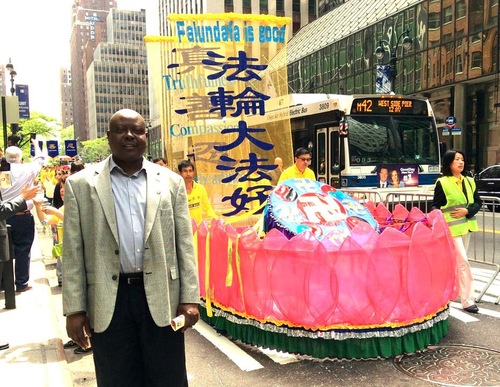 Moussa, a diplomat from the Republic of Chad, said that people should help Falun Gong fight for their freedom of belief.

“The Persecution of Falun Gong Will Be a Big Failure.”

Mr. Liang, a Chinese tourist, wanted to show his friends the video he took of the parade.

“It is quite impressive. I want my friends and family to see this video. You cannot see this in China. This is truly a free society. We all know Falun Gong is good, but it has been persecuted in China.”

Mr. Liang was happy to have a chance to quit the Communist Young Pioneers. “I know that the Chinese Communist Party is not the same as China,” he said to a practitioner who helped him to publish his announcement to quit the Party.

Mr. Lu is from southern China. He said, “The parade shows that the Party's persecution campaign will fail. It will be a big failure.

“I come to watch Falun Gong's parade every year. They are impressive. I see the power of the people and the power of compassion and forbearance in these parades. It is righteous power. Any political party or political leader, no matter who you are, if you violate the principles of truthfulness-compassion-forbearance, you will fail eventually. It is just a matter of time,” Mr. Lu said.