(Minghui.org) Support for over 200 million Chinese people breaking away from the Communist Party and its affiliated organizations was one of the themes of the march on 42nd Street on May 15. Spectators described the movement as “great” and “brilliant.”

One woman who wished to remain anonymous said other countries know that the Chinese Communist Party is bad, but do not question it for economic reasons. She was happy to see that Falun Dafa practitioners are exposing its crimes.

She said, "It is a terrible situation for anybody who questions the communist party. [...]  My impression (of the CCP) is that it is terrible if you are a journalist or a thinker. But since China is a big economy and has a lot of business with other countries, it is hard to question them. It shouldn't be that way.

"Quitting the CCP? That's great! This kind of parade makes people think, 'What is this? Is this really going to have any effect?' I really really think it does, because it raises awareness, and that is so important," she added. “I support you.”

The march started from 47th Street near the United Nations headquarters, passed by Grand Central and Times Square, and ended near the Chinese consulate at 42nd Street and 12th Avenue. Two other themes for the event were “Falun Dafa spreading in the world for 23 years” and “Stop the persecution.” 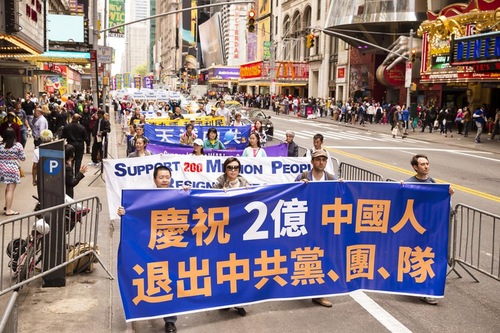 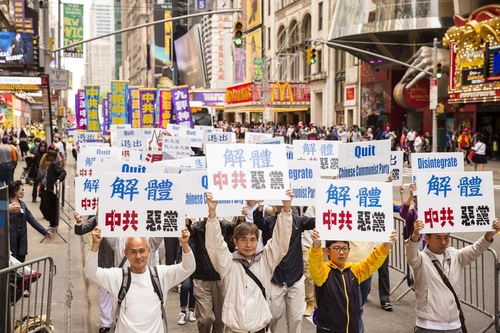 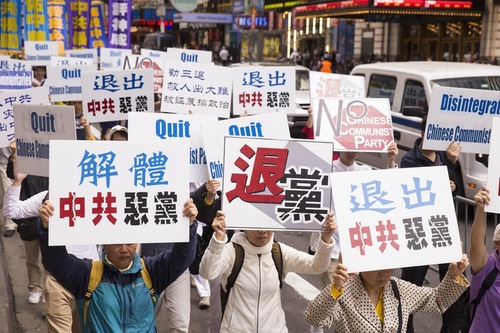 Supporting over 200 million Chinese people breaking away from the Communist Party was one of the themes of the march on 42nd Street on May 15. 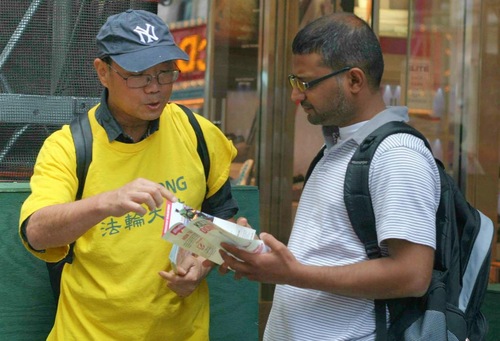 A Falun Dafa practitioner tells a pedestrian about the persecution in China. 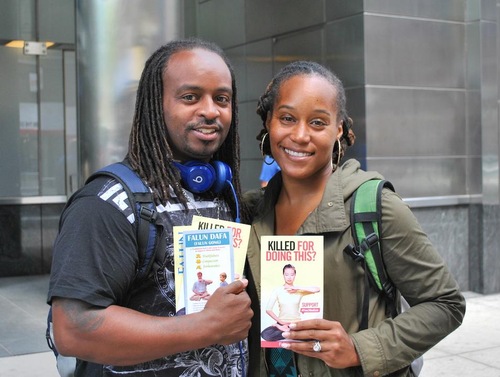 An observer named Frank said that he's often seen Falun Dafa practitioners distributing flyers in his hometown in northern England. He commented, "The persecution is unbelievable. These things go on unfortunately. (Quitting the CCP) is a good thing for them, and (the parade helps to) get the word out."

Margaret Forknall from London said, "This is the first I've heard about it (the persecution of Falun Gong). It's dreadful, shocking! Just horrendous. I mean, in this day and age it shouldn't happen. Everybody has the right to do what they want, as long as you're not doing anything bad.

"I am happy to see the Falun Gong practitioners here--I took several photos. I think it (quitting the CCP) is brilliant, to stand up for them as we do ourselves.

“This is the best location for you because there are so many people in New York City,” said Sekou Souhuru, a music teacher from Sweden. “This is my first time hearing about Falun Dafa. I will get to know more about it... The march looks peaceful and beautiful!”

Quitting the Party Is a Peaceful, Rational Solution

The movement of over 200 million Chinese quitting the Party was triggered by Nine Commentaries on Communist Party, a series of editorials published by The Epoch Times in 2004.

Xiao Zhonghua, president of the Melbourne Epoch Times in Australia, said, “Nine Commentaries helps Chinese understand that the Chinese Communist Party (CCP) replaced their traditional culture with its own after the Cultural Revolution. Nine Commentaries points out what the CCP is and what the foundation of humanity is.

“People know that the CCP harms Chinese people and China after they read the book. Once Chinese people lose that tie with their traditions, they are in danger. When they really understand this, they want to leave the CCP and break free from communist chains.”

“Quitting the Party is a rational, peaceful solution. Doing so based on conscience does not cause any harm to individuals or the country. It's a very good thing,” he added.

Mr. Zhu from Denmark said, “Chinese all know that the CCP is bad. The volume of Chinese tourists is increasing in Europe. We have observed many coming with a clear goal: quitting the Party. They come straight for materials or simply inform us of their decision to quit the Party.”

Ms. Man from Australia shared, “As a volunteer for quitting the Party in Australia, I hope every Chinese who visits Australia can renounce their communist organization memberships. Chinese people should all get to know the facts about the persecution. Falun Dafa teaches people to be kind, yet the communist propaganda has been slandering Falun Dafa and covering up its own crimes.

Ms. Dong said, “I hope we can pass the beauty of Falun Dafa on to people through today's march and raise awareness of the brutal persecution in China. We hope that more Chinese people can relinquish their Party memberships. So when it's time for the CCP to meet karmic retribution for its crimes, good people do not have to go down with it. What goes around comes around.”