(Minghui.org) Elected officials in Orange County, New York, have recently issued letters of proclamation recognizing May 13 as World Falun Dafa Day. They commended Falun Dafa for its great mind and body benefits, as well as its positive effects on society. They also expressed appreciation for practitioners' perseverance in their belief despite the 16-year persecution in China.

Sean Maloney, U.S. Representative for New York's 18th Congressional District for the past two years, wrote in his letter, “Falun Dafa (also known as Falun Gong), is a traditional Chinese practice guided by the principles of Truthfulness, Compassion, and Forbearance that has brought mental and spiritual well-being to more than 100 million practitioners from all walks of life in over 100 countries around the world.

“Whereas, despite the persecution against Falun Dafa launched in 1999 by the former Chinese dictator Jiang Zemin, this practice of self-cultivation has flourished, and practitioners throughout the world have responded with peaceful resistance, providing a source of strength to people who pursue freedom and aspire to improve the future of China and the World.

“Now, Therefore, Be It Resolved: that Master Li Hongzhi be honored and saluted for his remarkable accomplishments, as well as his service and commitment to promoting spiritual enlightenment, and that May 13, 2015, is declared 'Falun Dafa Day' in New York's 18th Congressional District.” 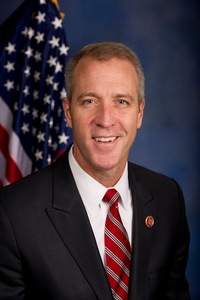 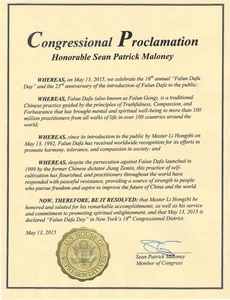 In his proclamation, Orange County Executive Steven Neuhaus wrote, “May 13, 2015 marks the 16th 'World Falun Dafa Day' and the 23rd anniversary of the introduction of Falun Dafa to the public.

“Falun Dafa (also known as Falun Gong) is a traditional Chinese self-cultivation practice based on the principles of Truthfulness, Compassion, and Forbearance.

“Whereas, thousand of honors and awards bear witness to the remarkable accomplishments of Mr. Li Hongzhi, the esteemed founder of Falun Dafa, and attests to the high regard in which he is held by numerous United States officials and representatives of international communities.” 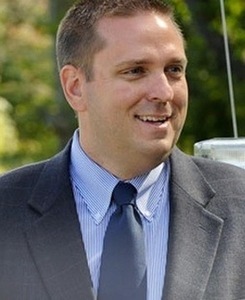 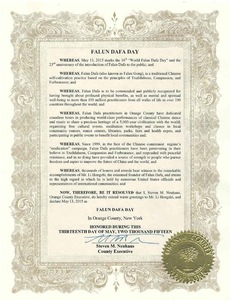 “Falun Dafa philosophy espouses the idea that when the heart is pure, the mind balanced, and the body energized, health and happiness are a natural outcome; individuals have been empowered to leave behind addictions and bad habits; families, to live in peace together; and communities, to embrace what is virtuous and life-affirming.

“That the 16th Annual Falun Dafa Day is to be celebrated on May 13, 2015, a day where practitioners and supporters across the world share the wonder and joy that Falun Dafa has brought to humanity.” 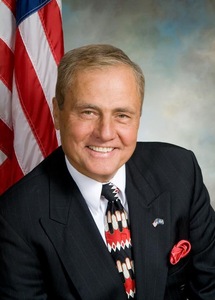 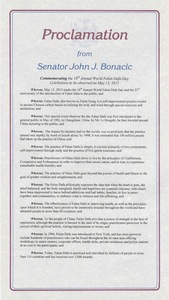 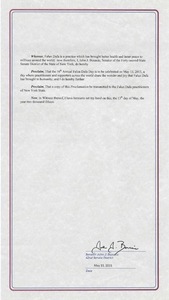 Karl Brabenec, New York State Assemblyman from the 98th District, wrote, “These principles of Truthfulness, Compassion, and Forbearance have proven to be beneficial to the millions of practitioners of Falun Dafa around the world.

“Mr. Li Hongzhi, by teaching Falun Dafa has helped pursue a worldwide effort to advance the mental, physical, and spiritual well-being of those who practice Falun Dafa.

“Falun Dafa practitioners within the 98th Assembly District of the State of New York benefit in the practice in many ways including organizing cultural events, meditation workshops, educating those who wish to learn the practice, and by participating in public events.” 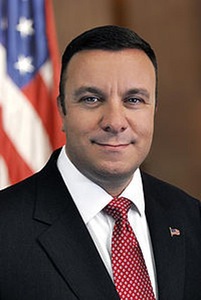 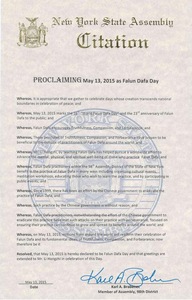 James Skoufis, Member of the New York State Assembly, also issued a proclamation honoring Falun Dafa. “More than 100 million people from all walks of life, in more than 100 counties, cherish the practice of Falun Dafa, which has brought them health benefits, and mental and spiritual well-being. 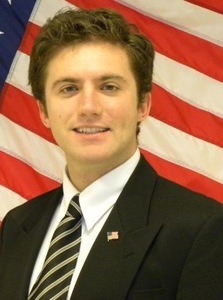 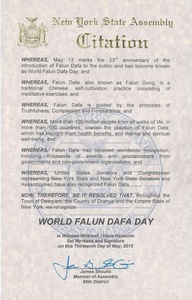 Aileen M. Gunther, Member of the New York State Assembly, wrote in her proclamation, “Practitioners of Falun Dafa strive to live by the principles of Truthfulness, Compassion and Tolerance in order to improve their moral nature, and in turn, to experience remarkable health benefits. 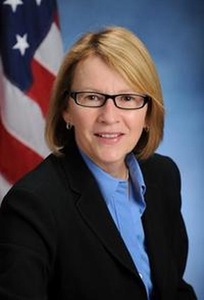 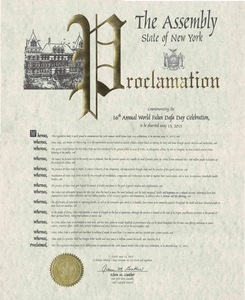