(Minghui.org) “About 200 million Chinese people have withdrawn from Chinese Communist Party (CCP) organizations as of today, according to the statistics of the Global Service Center for Quitting the CCP,” said Mr. Wei, host of a rally held at Montreal's Chinatown on April 4, 2015.

People in Montreal and surrounding cities participated in the rally to show their support and to congratulate the 200 million souls who obtained freedom. The movement of quitting the CCP began in December 2004. It was triggered by the Nine Commentaries on the Communist Party, published by the Epoch Times in November 2004.

The Divine Land Marching Band led the march after the rally. Participants held informative banners and signs about the movement: “Quitting the CCP for one's own safety,” “The CCP doesn't equate to China,” “Disintegrating the CCP to stop the persecution,” and so on.

More than a dozen Chinese overseas students renounced their Party organization memberships during the event, according to Ms. Wang, a volunteer for the Global Service Center for Quitting the CCP in Montreal. 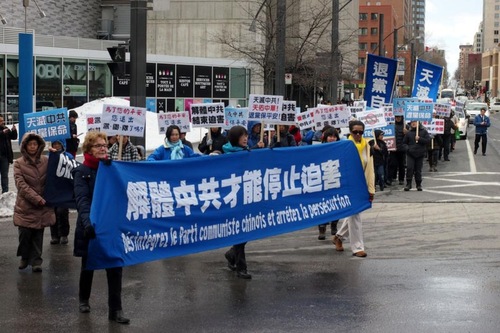 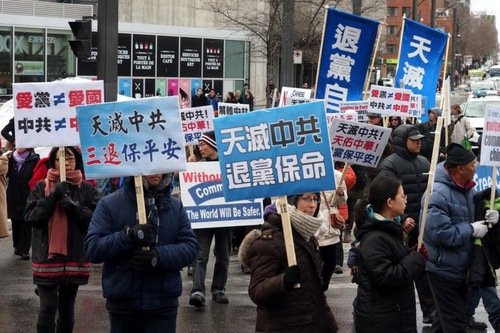 Mr. Pinard, another host of the event, said at the rally that quitting the CCP is about personal choices. People expressly declare that they no longer have anything to do with the CCP. Different people do this for different reasons, but in general, they have realized that the CCP has committed horrendous crimes, and they don't want to be held accountable for these crimes and go down with the CCP.

“I feel the darkness will come to an end soon. Hope is in you!” 82-year-old Mr. Zhang said loudly to Falun Gong practitioners who volunteered to raise awareness of the CCP's brutal persecution and help Chinese people see clearly the evil nature of the Party and renounce their membership in the Party and its affiliated organizations.

Mr. Zhang has lived in Montreal for more than 20 years. He told the practitioners that he had been subjected to three years of forced labor and ten years of imprisonment during the CCP's various political campaigns before leaving China. He was tortured to the point that he almost had a mental breakdown. He had also witnessed the horrible persecution his friends suffered.

“The CCP has used all means possible to persecute Chinese people. Its crime is monstrous,” he stated. 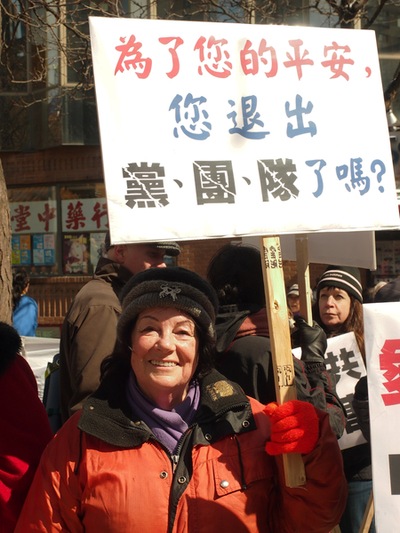 Walking in the march was a lady holding a sign reading, “For Your Own Safety, Have You Quit the CCP Organizations?” Ms. Héma-Claudia Hénault had made a one-hour trip from northern Montreal to participate in the rally and march.

Ms. Hénault used to teach English in China for a year and has a deep affinity for China and the Chinese people.

She said she came to the rally because she was shocked when she learned from her friends that Falun Gong practitioners in China are tortured and even have their organs harvested while still alive, simply for remaining steadfast in their belief.

But she was not too surprised based on her experience in China. She therefore came to support the 200 million Chinese people who have broken free and renounced the Party.

China needs people who are as courageous as those participating in the march, said Ms. Hénault. She said that the rally attendees should spread the message further so that more people will gain freedom.

A new Chinese immigrant who just arrived in Montreal was amazed at the performance of the Divine Land Marching Band. She learned that celebrating the Chinese people quitting the CCP was the theme of the march, and she told a Falun Gong practitioner that she would read more about the movement online.

Ms. Yang, coordinator of the Montreal Service Center for Quitting the CCP, said that their center often receives phone calls from immigrants or visitors from China seeking help to submit their resignation from the Party to the tuidang [quit-the-CCP] website.

A Chinese immigrant called the center shortly after he landed Montreal. Ms. Yang said, “The person told us that he had no idea who to turn to quit the CCP in China. So once he arrived in Montreal, he managed to get through to the hotline to process the renunciation for himself and his mother.”