(Minghui.org) On April 25, 1999, over 10,000 Falun Gong practitioners gathered peacefully in Beijing to ask the central authorities to release practitioners who were detained in the city of Tianjin. They also asked the government to reaffirm their right to practice their belief in Truthfulness-Compassion-Forbearance.

Later that day, the demonstrators peacefully dispersed, after then-Chinese Premier Zhu Rongji met with a few practitioner representatives. Zhu agreed to release the jailed practitioners, and gave assurances that the government did not oppose Falun Gong. 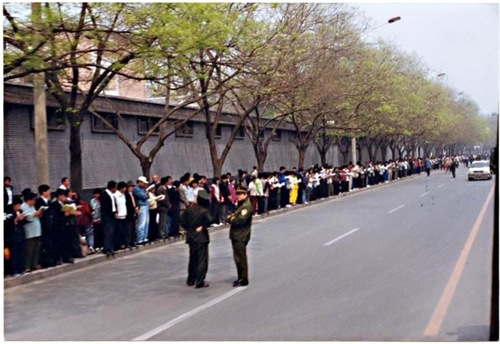 The peaceful demonstration in Beijing on April 25, 1999.

The peaceful demonstration also had a big impact on many bystanders. Mr. Zhao Guang, a private business owner from Tianjin, was one of them. He drove his Falun Gong practitioner wife to Beijing so she could tell the government how she benefited from practicing Falun Gong.

He was stunned by the long lines of people who were acting in a civil and peaceful manner. He was born in the 1960s and had gone through some of the Chinese Communist Party's (CCP) political struggles. He expected to see vocal protesters shouting slogans and carrying big banners. But the demonstration on that day was peaceful beyond his imagination.

His view of the world started changing, and he learned more about Falun Gong after returning home. He started practicing Falun Gong after that experience. He talked to his employees, friends, and relatives about what he saw that day.

The peaceful demonstration was widely reported in the international media, and it brought international attention to Falun Gong. Yet, the peaceful nature, kindness, and self-discipline of Falun Gong practitioners caused then-Party head Jiang Zemin to become jealous. Soon after, he initiated the brutal persecution of Falun Gong by utilizing the entire state apparatus. He declared that he would “eliminate Falun Gong within three months.”

Facing such brutality, Falun Gong practitioners hold strong to their beliefs and conduct peaceful protests. Facing indifference, misunderstanding, and hatred, they are not angered or deterred and continue to raise awareness about the grace of Falun Gong and the brutality of the persecution, as well as the nature of the Party. They do not seek anything in return. They keep their steadfast belief in Truthfulness-Compassion-Forbearance.

The demonstration on April 25, 1999 is regarded as the beginning of the 16 years of non-violent resistance to the inhumane persecution. Falun Gong practitioners' perseverance and kindness have encouraged Chinese people to walk away from the terror, violence, and lies of the CCP.

During its 60-plus years of authoritarian control, the CCP initiated various political movements and created man-made famines, which caused the non-natural deaths of 80 million Chinese. It damages traditional Chinese culture and educates people with atheism and its own ideology of constant “struggle.” As a result, most Chinese people have no belief nowadays. People are encouraged to get rich and seek material wealth. As a result, moral degradation and corruption are rampant in China.

But Falun Gong practitioners have persevered in upholding kindness and have not given in to the Party. Their peaceful and rational protests speak out against violent suppression and safeguard justice.

Over the past 16 years, Falun Gong has spread to over 100 countries. More than 200 million Chinese have renounced the Party and its youth organizations on the website of The Epoch Times. Their choice to discard communism will help China to welcome a new era without the totalitarian regime.