(Minghui.org) About 800 Falun Gong practitioners attended a rally and a march in Hong Kong on April 25, 2015. This event commemorated the peaceful demonstration by practitioners in Beijing 16 years ago, at the dawn of the brutal persecution in mainland China that continues to this day.

Rejecting the atrocities committed by the Chinese Communist Party, 200 million Chinese people have renounced their memberships in the Communist Party and its youth organizations as of April 2015. This movement was another theme highlighted in the march on Saturday.

Led by the Divine Land Marching Band, the three-hour march attracted the attention of many tourists and local citizens. 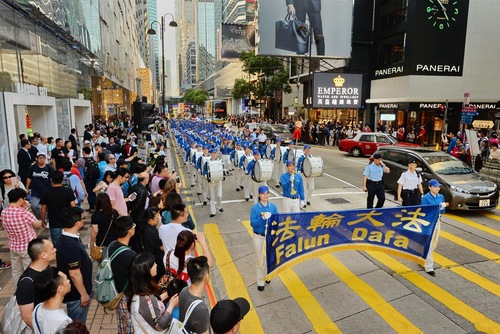 March in Hong Kong on April 25, 2015, led by the Divine Land Marching Band 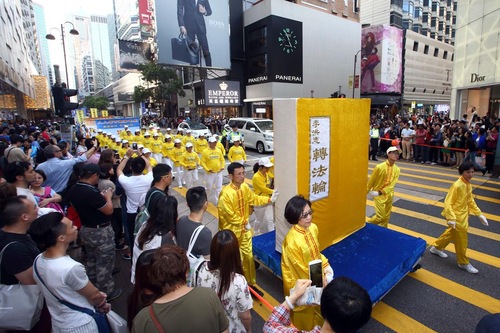 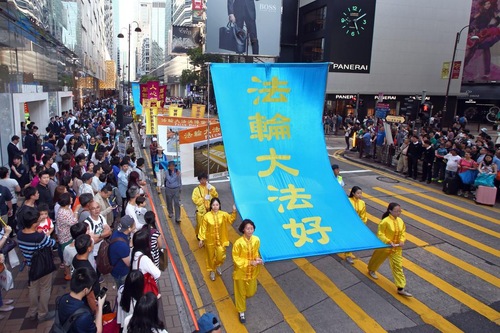 Practitioners display a “Falun Dafa is Good” banner in the march. 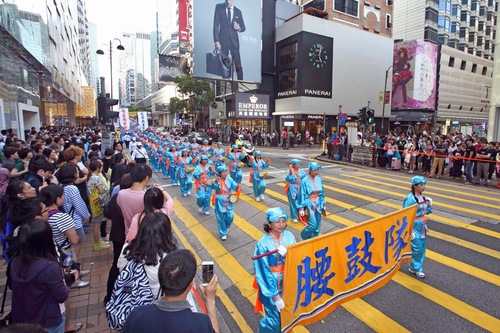 The waist drum team performs in the march.

Ms. Tang from Shenzhen in Guangdong Province said that this was her third visit to Hong Kong. “But I've never seen something like this before. I'm so excited and happy to see this!” she said.

Ms. Tang said she did not know Falun Gong was freely practiced in Hong Kong. “The march is so impressive. I like it very much,” she added.

Ms. Tang said she agreed with Falun Gong's principles of Truthfulness-Compassion-Forbearance. She said, “Everyone should have freedom of belief. What you are doing is great. I support you.”

Ms. Jiang from Shanghai said this was also her first time to see such a march. “It was impossible to imagine something like this in mainland China. Now I know these two places are very different.” 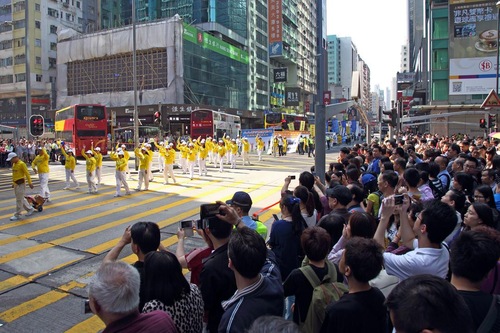 Mr. Wang from Beijing picked up a banner and joined the march.

“I'm not a Falun Gong practitioner,” Mr. Wang explained, “but I've seen police beating practitioners at Tiananmen Square.” He said many people in China support practitioners but do not have the chance to voice their opinions.

A man from Shenzhen watched the march from beginning to end. “I did not expect police would help guide the march, because in mainland China, it is just the opposite [where police suppresses any such gathering].”

His parents and grandparents used to live in central China but were forced by political campaigns to move to Guangdong Province. “The Party is rotten to the core, and everyone wants it to collapse—it's just that we don't dare to speak out about this in the mainland.”

Arxia, also from Shenzhen, said she did not know there were so many Falun Gong practitioners in Hong Kong. “It seems I have been fooled by the Communist Party's propaganda,” she said. 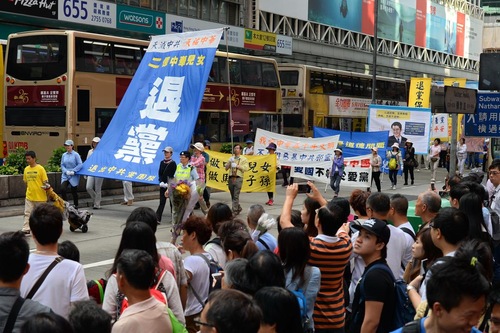 The pro-communist Hong Kong Youth Care Association (YCA) harassed practitioners during this event. Hong Kong resident Mr. Chen told group members to “act upon their conscience” and that “helping the Party to persecute Falun Gong will not do you any good.”

Mr. Tian and nearby residents echoed Mr. Chen's words, “This is Hong Kong, not mainland China. We don't want the Communist Party here.”

One police officer agreed, “We know Falun Gong practitioners are volunteers and the YCA members are paid. You're doing the right thing. Please keep it up.”

““I Know Falun Dafa Is Wonderful””

“School Teacher: “I Will Help You Save People””