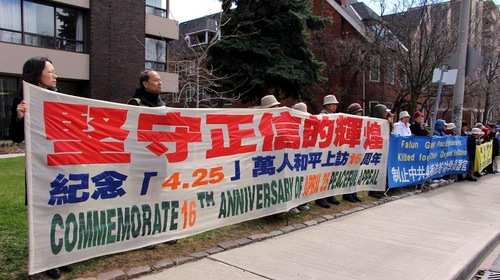 Falun Gong practitioners hold banners in front of the Chinese Consulate in Toronto on April 24, 2015.

In front of the Chinese Embassy in New Zealand, Ms. Shang Hua recalled what took place sixteen years ago in China: “On the night of April 24, 1999, I learned at my group study site in Beijing that the police in nearby Tianjin had violently arrested 45 Falun Gong practitioners. They claimed that their release wouldn't be possible without a decision from Beijing.”

“These practitioners were arrested because they visited the Youth Reader magazine to request the withdrawal of a slanderous article against Falun Gong,” Ms. Shang continued. She said that this was why she joined the 10,000 Falun Gong practitioners outside the State Council on April 25, 1999 – to protest the unjust treatment of practitioners in Tianjin.

Ms. Shang said that after 9 p.m., practitioners learned that the then Chinese Premier Zhu Rongji met with practitioner representatives and decided to release the detained practitioners in Tianjin. He also reassured practitioners of the legality of practicing Falun Gong, and promised to restore permits for the publishing of Falun Gong materials. Satisfied with the outcome of their peaceful demonstration, the practitioners then quietly dispersed. 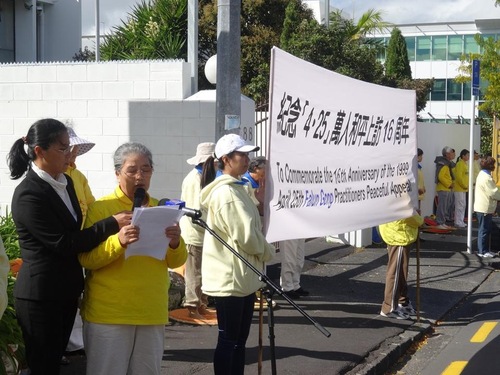 Ms. Wang Jiuchun, then an assistant professor at Tsinghua University, shares her experience of the peaceful demonstration 16 years ago

Another practitioner at the New Zealand event, Ms. Wang Jiuchun, then an assistant professor at Tsinghua University, shared her experience of the peaceful demonstration 16 years ago: “The Chinese Communist Party propaganda used terms like 'surrounded' and 'attacked' when they described this event. It's a common trick of the CCP to release this kind of propaganda in preparation for a crackdown. Our protest was completely quiet, orderly, and nonintrusive,” she recalled.

As a result of practitioners' persistent efforts, people around the world have come to understand truth of the persecution despite the CCP's slanderous propaganda. A passerby, Mr. Chen encountered practitioners in Helsinki, Finland. Upon learning about the persecution, he asked, “In addition to my signature, what else can I do to help?”

Benjamin Ismail, Head of the Asia-Pacific desk of the non-governmental organization Reporters Without Borders, has noted the trend of many people in China seeking uncensored information by circumventing the regime's Internet firewall. He encouraged practitioners to continue exposing the persecution. 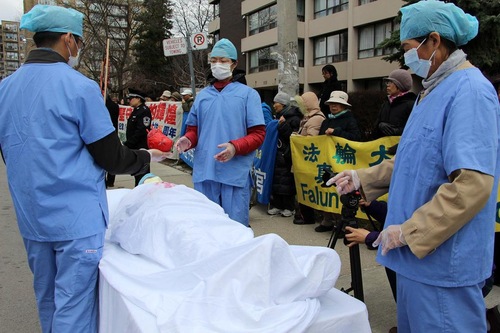 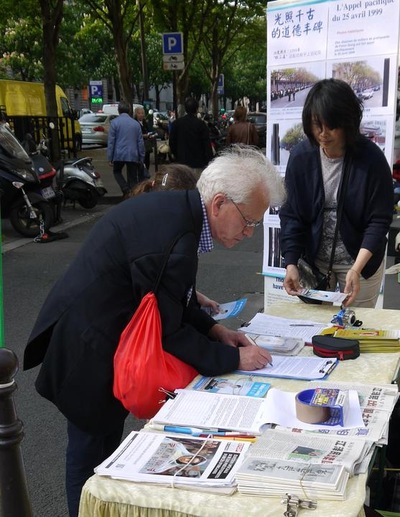 A French gentleman signs a petition to call for an end to the persecution during a Falun Gong event in front of the Chinese Embassy in Paris on April 24, 2015. 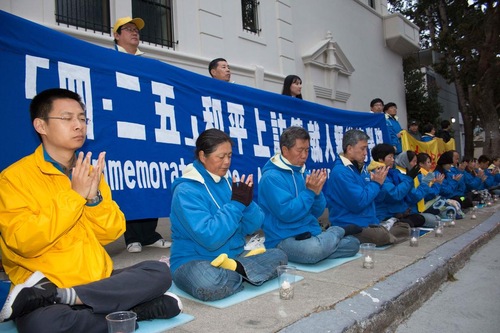 Practitioners staged a peaceful protest outside of the Chinese Consulate in San Francisco on April 24, 2015. 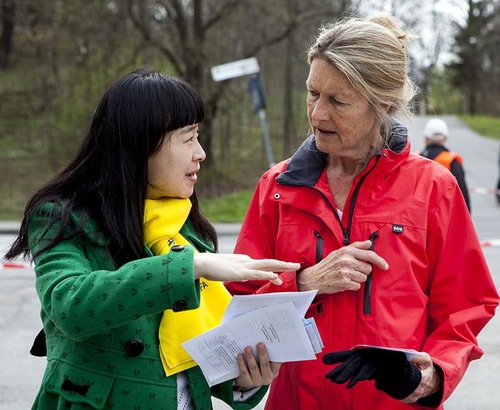 A practitioner talks to a passerby in front of the Chinese Embassy in Stockholm, Sweden on April 25. 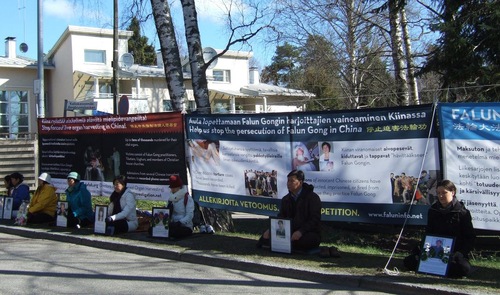 Peaceful protest in front of the Chinese Embassy in Helsinki, Finland on April 24, 2015

“April 25: Prologue to the Battle Between Righteous Belief and Evil”