(Minghui.org) While sightseeing in Taipei, a tourist from Mainland China was taken aback: “I've never seen anything like this before,” said Mr. Zhao as he watched 3,000 Falun Gong practitioners performing the meditative exercises in front of the Presidential Building on April 19, 2015.

Practitioners in Taipei had gathered to commemorate the peaceful protest in Beijing 16 years ago just before the communist regime launched the persecution nationwide (see the background info at the end of this report). 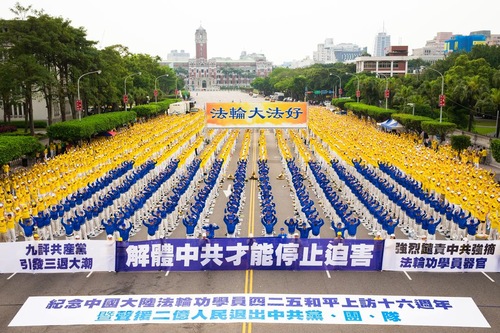 Falun Gong practitioners in front of the Presidential Building on April 19 commemorate the 1999 peaceful demonstration in Beijing. The banners say, “Stop Persecuting Falun Gong” and “Congratulations to the 200 Million Who've Quit the CCP.” 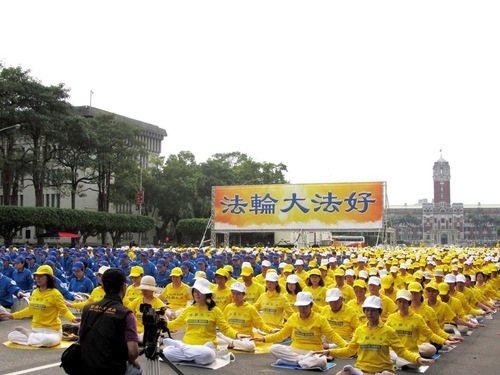 The fifth exercise is a meditation. The banner reads, “Falun Dafa Is Good.” 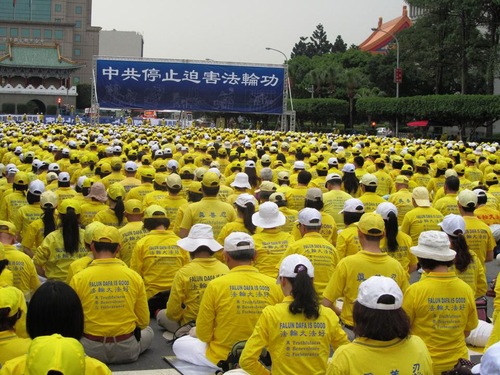 The banner reads, “The CCP Must Stop Persecuting Falun Gong.”

Mr. Zhao, from Dalian City, China, was among the many tourists from China who learned the real story behind the persecution of Falun Gong during the event and decided to take a stance by renouncing the Chinese Communist Party (CCP).

He was impressed by the number of people doing the exercises and asked a practitioner how Falun Gong got to be so popular.

“In fact," said the practitioner, "Falun Gong is now welcomed in more than 100 countries and has been honored with thousands of proclamations for its benefits to individuals and to society."

Glancing through the written materials the practitioner handed him, Mr. Zhao raised many questions, most of them related to the hate propaganda perpetuated by the state-run news media in China. The practitioner described how the CCP fabricated thousands of cases to discredit Falun Gong, staged the self-immolation on Tiananmen Square to incite hatred of the practice, and harvests organs from living practitioners.

Convinced, Mr. Zhao decided to quit the CCP Youth League and Young Pioneers. Before taking pictures and bidding the practitioner farewell, he carefully stowed his literature, which included a copy of the Nine Commentariesand information on overcoming the Internet firewall, in his bag. 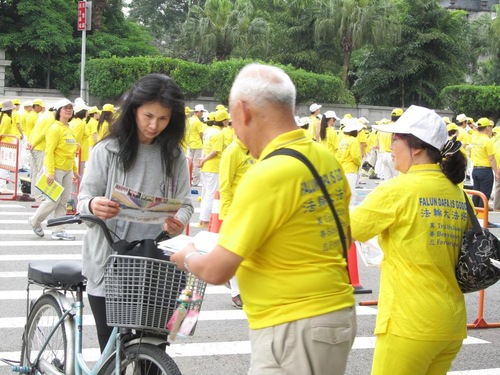 A woman stops to learn more. 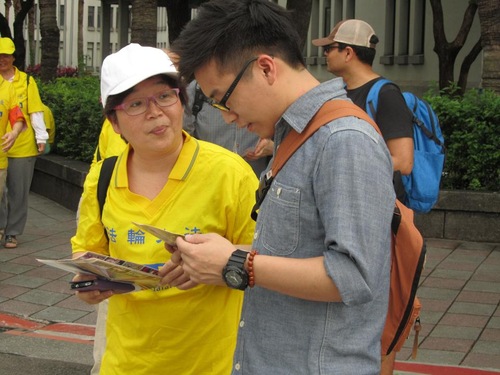 A young man reads about Falun Gong as a practitioner tells him about the suppression in China. 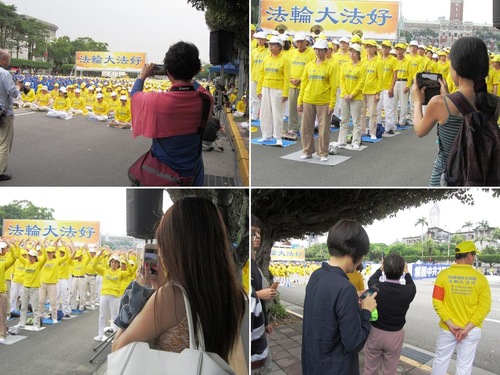 Tourists and residents photograph the event.

Many tourists and local residents passing by Ketagalan Boulevard from 1 to 4:30 p.m. took pictures or asked for more information. Several news media covered the event as well.

Mr. Lin and and his wife, Ms. Wei, were walking with their children when they saw the practitioners meditating. “We know Falun Gong practitioners. They are good people and they really follow their belief.”

Mr. Liao, a small business owner from Hsinchu City, said he drove over an hour to this event. “I wish I had my camera with me today,” said the amateur photographer. “Magnificent scenes like this are few and far between.”

Mr. Liao commented that the CCP had come up with many excuses to justify the persecution of Falun Gong. “It is true that Falun Gong has many followers," he said, "but they are peaceful and they follow the principles of Truthfulness-Compassion-Forbearance. Isn't this a good thing? I have seen practitioners in many countries, and they have never caused any problems. It is the Party that is causing problems.” 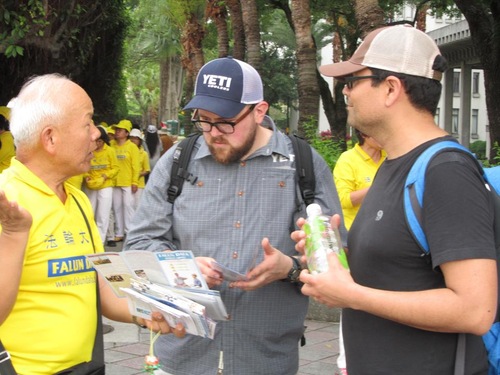 A tourist and his friend learn about Falun Gong.

Journalist: It Is Wrong for the CCP to Suppress Falun Gong

Among the news media that covered the event were Radio Free Asia and Liberty Times. One reporter said to a practitioner, “The great efforts of your group have earned my respect. I deeply admire your perseverance.”

Mr. Zhang, a journalist for an overseas news agency, said he has been covering Falun Gong practitioners' activities for more than 10 years. “I often report on your events. It is wrong for the CCP to suppress Falun Gong and the principles of Truthfulness-Compassion-Forbearance, let alone torture people or carry out live organ harvesting.”

After dozens of Falun Gong practitioners were arrested in Tianjin in April 1999, practitioners learned that the arrest order came from Beijing. More than 10,000 practitioners peacefully gathered at the Appeals Office in Beijing on April 25, requesting the release of the jailed practitioners. Premier Zhu Rongji met with practitioner representatives and assured them of a peaceful resolution to the situation. Everyone went home.

Three months later, however, then Chinese Communist leader Jiang Zemin announced a ban on Falun Gong and launched the nationwide suppression. The severity of the persecution and massive hate propaganda against innocent practitioners made many Chinese rethink its legitimacy.

“From Death's Door to Lives of Fulfillment”

“One Must Not Obtain Assets That Belong to Others”