(Minghui.org) Falun Gong practitioners in Singapore rallied in Hong Lim Park recently to commemorate the 16th anniversary of the peaceful demonstration that brought together some 10,000 Falun Gong adherents in Beijing on April 25, 1999.

At the Singapore rally, practitioners passed out leaflets and put up displays that document the brutal persecution that Falun Gong endures in communist China. They also collected petition signatures calling for an end to China's state-sanctioned organ harvesting atrocities, and practiced the Falun Gong exercises en masse. The rally was held on April 14, 2015.

The demonstration, which was widely reported in the international media, brought Falun Gong to international attention. Soon after, however, Jiang Zemin, head of the CCP at the time, initiated the brutal persecution of Falun Gong.

Thus the peaceful demonstration of April 25 marked the beginning of 16 years of Falun Gong's non-violent resistance to the persecution. 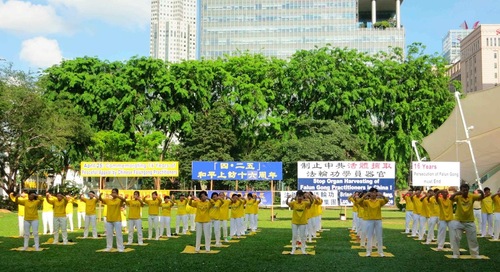 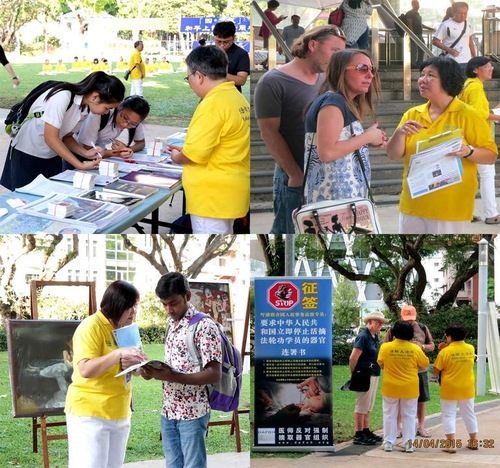 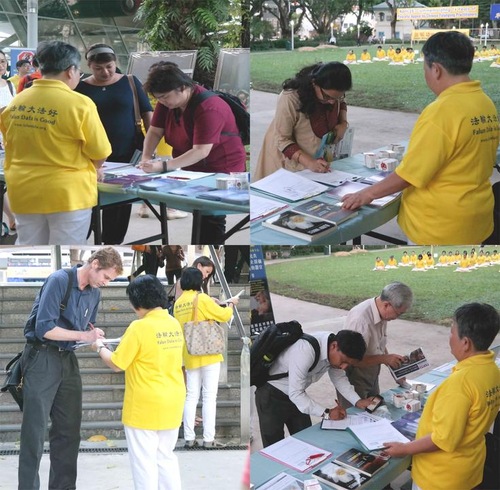 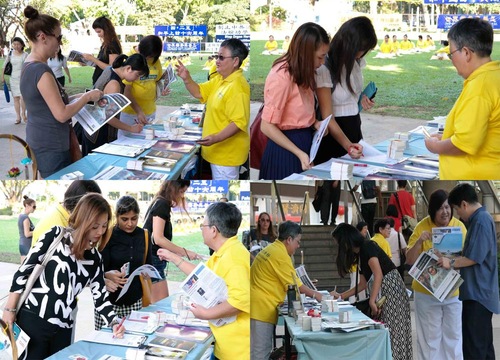 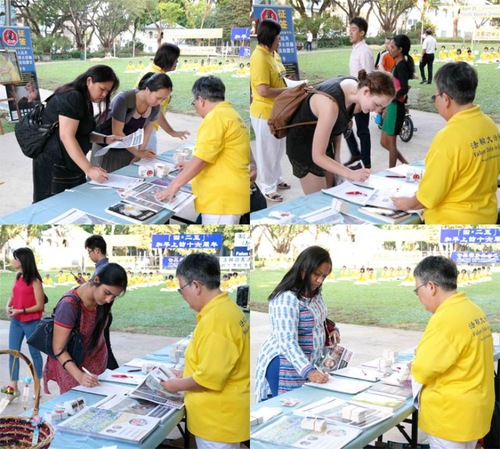 Tourists and passersby pause to learn the story behind the event. Many sign a petition calling for an end to China's state-sanctioned organ harvesting atrocities against prisoners of conscience, most of whom are Falun Gong practitioners.

“China is a communist country. The authoritarian regime issues orders and expects its people to follow them without question. There is no freedom. Despite that, Falun Gong practitioners stood up on April 25, 1999, and asked the Chinese government to reaffirm their right to practice. Outstanding!

“Falun Gong is beneficial for one's physical and spiritual health. It is very good.

A young couple from Shanxi listened to a practitioner's explanation, and both of them agreed to quit the Party and its affiliates.

The young man said, “We frequently visit Minghui.org, NTDTV and Epoch Times websites, and have thereby learned so much that we could not find out about in China. We learned that the Tiananmen Square self-immolation was indeed a staged hoax. The Party did it to make people hate Falun Gong.”

He was impressed to see so many practitioners doing the exercises together and said he was interested in learning more about Falun Gong.

Numerous people from all over the world signed the petition calling for an end to the harvesting of organs from living Falun Gong practitioners and other prisoners of conscience in China.

John Murray, a businessman from Northern Ireland, stopped to learn more. Appalled, he readily signed the petition. He said, “Even if it happens to only one person, it must be stopped. The number of practitioners who've already been killed for their organs is staggering.”

Two artists, Lidia Vitkovskaya and Denis Mikhaylove from Moscow, were drawn to the large banner that said “Stop Organ Harvesting from Falun Gong Practitioners in China.” Ms. Vitkovskaya said it was the first time she'd ever heard about it. She signed the petition without hesitation. They both had high praise for the paintings exposing the CCP persecution.

Carlos Jiamenez and Catalina Fonnegra, two tourists from Colombia, said that they hoped their signatures would help stop the brutality.