Australia: Live Organ Harvesting "Too Horrible and It Must End Immediately!”

(Minghui.org) “We watched the program on SBS and discussed this over lunch at work a few times,” said Anna, a public relations consultant who stopped at a recent Falun Gong event to sign a petition. “It is a sad situation that the Chinese communist harvests organs from live Falun Gong practitioners and political prisoners,” she said.

This was during a petition drive held by Sydney Falun Gong practitioners at the City Town Hall on April 10, 2015. The documentary “Human Harvest: China's Organ Trafficking” was broadcast on the SBS TV network just a few days prior, and the practitioners volunteering at the event said they noticed greater awareness and concern from the public.

Anna, mentioned above, said she had been aware of the communist regime's brutality, but that “This [live organ harvesting] is too horrible and it must end immediately!” 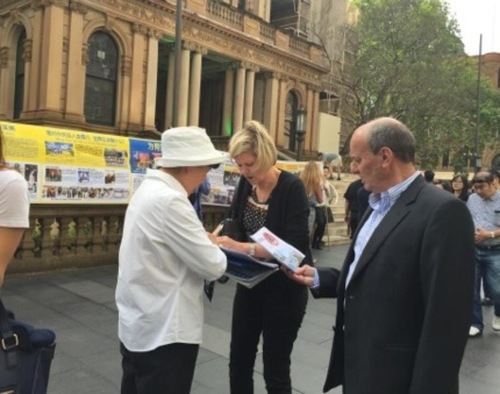 Practitioners distributing materials in front of City Town Hall in Sydney on April 10, 2015. 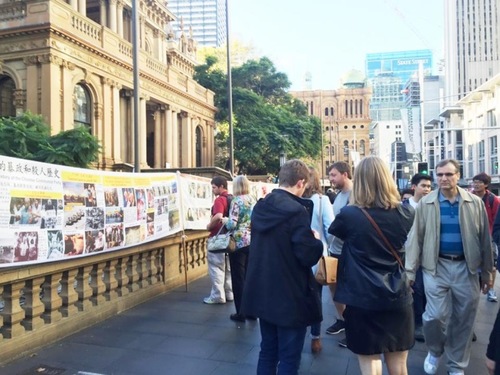 Linda and her boyfriend Phil, tourists from Germany, saw the posters and stopped to learn more. Appalled by the organ harvesting atrocities, they put their luggage down and began distributing pamphlets with the practitioners before looking for a hotel. 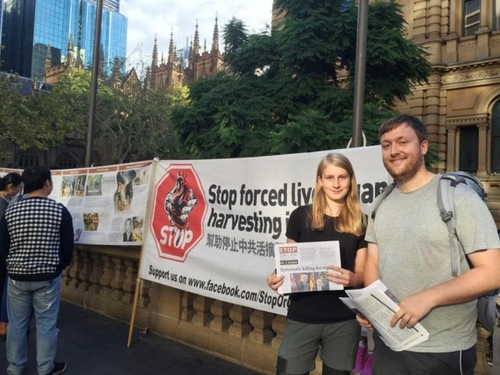 “What you are doing are very important,” Linda said to a practitioner after helping hand out materials for an hour, “We hope we can help stop this atrocity.” 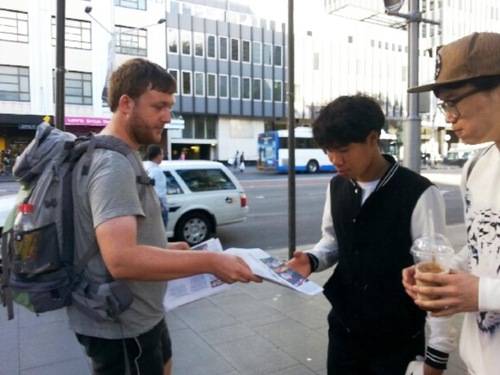 Ms. Bai, a practitioner who organized the event, said practitioners have been coming here every week to inform people about Falun Gong and the severe persecution in China. “Probably because of the recent coverage by the SBS TV network, today we saw more people signing the petitions.”

“We hope more people will pay attention to this, know what's going on, and take an upright stance,” said Ms. Bai.