(Minghui.org) Today's news from China includes incidents of persecution that took place in 8 cities or counties in 6 provinces. According to this report, 10 Falun Gong practitioners were subjected to mistreatment during their detention, and at least 6 practitioners were illegally arrested. 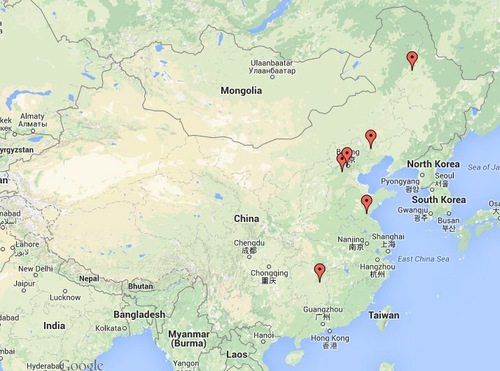 After the Communist regime abolished its labor camp system under international pressure in 2013, the notorious Masanjia Forced Labor Camp morphed into a new ward of Liaoning Women's Prison, where the same people continued the same tactics in the same exact facility.

According to most recent data compiled by Minghui.org, 21 women remain detained in Masanjia and are serving their illegal sentences. Below details are the length of their verdicts:

Ms. Xia Yuping, her husband and Mr. Zhou Meisong were arrested in November 2014. They were tortured during interrogation. Mr. Zhou was tied to a tiger bench with his hands cuffed at his back for 18 days. He was also deprived of sleep.

Their family hired two lawyers in December 2014. But the Tongzhou District 610 Office agents forced Ms. Xia's daughter to sign a document to dismiss the lawyer. Officers of the 610 Office coerced Ms. Xia's husband to have his daughter hire the designated lawyer. The police also went to Mr. Zhou's hometown in an attempt to force his father to dismiss the lawyer, but the elderly man firmly refused.

Mr. Lu Shangchun was arrested on September 7, 2014 when he used paper currency with messages about the persecution of Falun Gong printed on it. The Changping District Court held a trial against him on January 19, 2015. He was sentenced to 3.5 years' imprisonment on February 13, 2015.

Mr. Deng Ye and his wife Ms. Fu Xianhua, Mr. Wang Guilin and Ms. Tang Peilin were transferred from the Xiangtan Detention Center to prisons around February 19, 2015. Ms. Fu is being held in the Changsha Women's Prison.

Ms. Huang Duohong and Ms. Lu Mengjun are also being held in the Changsha Women's Prison. Their families were not allowed to visit them.

Ms. Lu was arrested by officers from the Laishui Police Department on February 25, 2014. Her home was ransacked. She has been held in the Baoding Detention Center.

Mr. Chen Jingyu and his wife Ms. Tian Shuying from Gasi Village were recently sentenced to 3.5 years. Ms. Tian is being held in the Ningcheng Detention Center. Mr. Chen is at home and will soon be sent to a prison.

Mr. Ma Zhanquan, Ms. Jia Fengzhi and Mr. Wang Jianfu from Pinggu District were arrested on January 7, 2015. They were transferred to the Beijing Detention Center on February 13, 2015.

Ms. Yao Bingfang, 63, was sent to the Jinan No.1 Women's Forced Labor Camp in 2008. She was forced to stand for extended periods of time, forced to undergo brainwashing, deprived of sleep and subjected to forced labor. She became very weak as a result. In mid-July 2013, she bled heavily and became incontinent. She was on the verge of death. The camp authorities had to send her home.

She continued to have massive hemorrhage multiple times after she was released. She became extremely weak, yet agents from the Jinan 610 Office still constantly went to her home to harass her. After being tortured for a long time and bearing substantial mental pressure, Ms. Yao's health deteriorated. On February 9, 2015, she passed away.

“My Understanding on the Issue of Leaving China”