I Was Tortured at Jinzhou City Forced Labor Camp

(Minghui.org) My name is Wang Yuquan, and I'm 60 years old. I was tortured for three years at Jinzhou City Forced Labor Camp for my belief in Falun Gong.

The officers who ran the Jinzhou City Forced Labor Camp subjected me to brainwashing and tortured me and other Falun Gong practitioners, attempting to force us to denounce our belief.

They used former practitioners who had gone astray to brainwash us, but failed. Then they brought a female collaborator, Guo, from the notorious Masanjia Forced Labor Camp to transform me. She tried to trick me, and said, “You don't need to write anything. We will prepare the papers, you only need to sign.” I was muddle headed and agreed. Later I realized what I had done: I betrayed Dafa and Teacher. I immediately made a solemn declaration to void my wrong act.

As a consequence, I faced more sinister abuse. Officer Zhang Jiabin, Mu Jinsheng and two detainees tortured me. They pushed me into a corner, cuffed my hands, put a helmet on me, turned on a loudspeaker and forced me to listen to slander about Falun Gong. They kept hitting the helmet with a wooden board until I was dazed. I vomited whatever I ate. 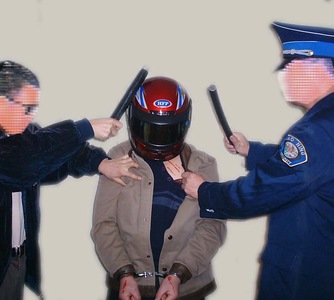 I was tortured both day and night, until I couldn't think straight. My legs became swollen and I could not walk. They didn't stop until I was on the brink of death. As soon as I recovered a bit, they resumed the torture.

Officer Wang slapped my face several dozen times with a wooden board 80 cm long and 8 cm wide. My face was very swollen, but I did not give in. 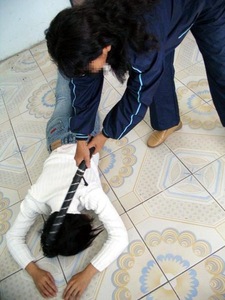 Next, they took off all my clothes and stuffed my mouth and nose and blindfolded my eyes with dirty, bloodstained rags. I couldn't breathe. A guard shocked my entire body with an electric baton. I felt I was going to suffocate and die. I could not endure such intense torture, and I once again compromised.

But my regret was beyond words, and I was extremely despondent. I again declared my compromise to be void.

Several officers came in, and hit and kicked every part of my body. I was in extreme pain. My ribs were broken and I could not move. I was not given any medical treatment, but instead I was forced to sit on a small stool from morning to night. They repeated the previous tortures on me and then detained me with other practitioners who hadn't yielded. We were forced to sit on small stools every day.

The days ran together, and I can't remember how long I was tortured this way, but I did not give in. One day I suddenly stood up from the stool. The guards were frightened and did not know what to expect. After that I no longer sat on a small stool, but sat on a bed, until I was released in September 2003.

“My Curved Back Became Straight Again after Ten Years”