(Minghui.org) Falun Gong practitioner Ms. Liu Hong, 37, went on a hunger strike to protest her January 9 illegal arrest and detention. She was force-fed several times and is now receiving emergency treatment. She in critical condition. 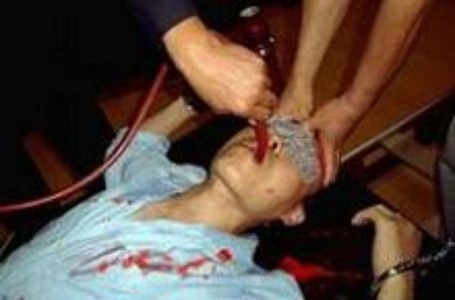 She returned to the hospital two days later, and the doctor said that Ms. Liu had swelled up suddenly. When her mom went to the emergency room to see her, the guard stopped her, and a policewoman called the Wendeng Domestic Security Division.

Several officers from the detention center and the domestic security division came. The mother cried. “You shouldn't harm my child,” she said. “She's a good person, so you cannot treat her like this. I want to take her home!”

Ms. Liu was very swollen, and the doctor told her mother that Ms. Liu's white blood cell count was dangerously low. He said she was in danger of dying if her condition did not improve.

Ms. Liu, from Weihai City, Shandong Province, was illegally arrested at Wendeng Health School on the evening of January 9, 2015. She was later illegally detained and taken to the Wendeng Detention Center.

“Growing Under the Grace of Dafa”