(Minghui.org) Over 20 Members of European Parliament (MEPs) sent a joint letter on February 3 to the Chinese Ambassador in Germany, local courts in Heilongjiang Province, and the provincial “610 Office” to demand the immediate release of four Falun Gong practitioners arrested in March 2014.

The letter also condemned the illegal acts of the local courts and police department and requested provincial authorities to invalidate the verdict of the illegal trial. The latest hearing was held on January 8, 2015. The verdict hasn't been made public.

In addition to leading the effort of the joint letter, MEP Klaus Buchner also openly condemned the persecution on his Facebook page on February 5:

“The more than 15 years of persecution of Falun Gong and systematic live organ harvesting from Falun Gong practitioners by the Chinese Communist Party violated not only the freedom of belief, freedom of one's own opinion, and other basic rights protected by the Chinese Constitution, but also the conventions that China has signed, for example, the United Nations Convention against Torture.”

This was the second time Mr. Buchner has voiced his support of Falun Gong following a previous Facebook post on January 7, 2015. Mr. Buchner continued in his February post: 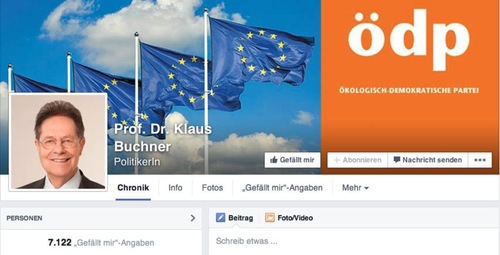 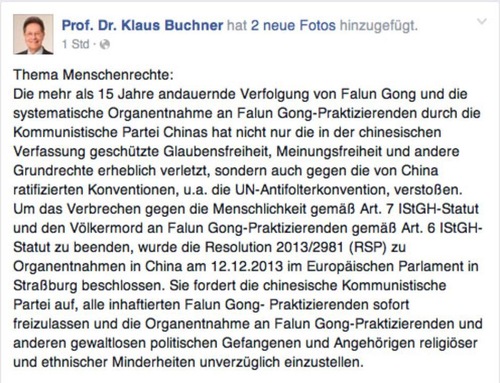 A more detailed list of requests are as follows:

Regarding the unlawful trial of the four Falun Gong practitioners by Jiansanjiang Land Reclamation Court, Mr. Buchner communicated with Ambassador Yang Yanyi of the Chinese Mission to the EU on January 8, 2015. He also expressed his protest to the communist regime in his Facebook.

He wrote in an essay entitled “Focus on China” published on Facebook, “Falun Gong practitioners have been persecuted and detained because of their beliefs. Even their defense lawyers were detained or tortured. Freedom of belief stipulated by the constitution of the People's Republic of China has to be granted to these believers.”

Regarding the Chinese Communist Party's hate propaganda and killing practitioners for their organs, Mr. Buchner pointed out that propaganda paves the way for the regime's persecution of Falun Gong; it is one of the most evil means used by totalitarian and authoritarian regimes. The suppression applies to a lot of people, even an entire religion or population of the country. “European countries must take action,” he said.

Having witnessed the Nazis' genocide against Jews, Mr. Buchner expressed that the purpose of the Chinese Communist regime is to abolish people's spiritual belief and freedom by tightly controlling their minds. The regime does not allow people to lead a spiritual life as it can bring people freedom and kind relationships.

Mr. Buchner said, “We Europeans truly care about such situations and protest such acts. We also tell the authorities there we do not wish such things to happen as it can really affect our relations.”

He also indicated that he and other Members of European Parliament would follow the case's development, continue to rescue Falun Gong practitioners involved, and support their defendant lawyers.

The March case centered around Qinglongshan Brainwashing Center. According to Wang Quanzhang, there are hundreds of similar black jails, or extralegal detention facilities, in China. Such facilities have operated at a low profile for years and effectively replaced forced labor camps that were officially shut down in 2013.

The four human rights lawyers, Falun Gong practitioners detained in Qinglongshan Brainwashing Center, and practitioners' family members went to the brainwashing center on March 20, 2014. Denied entry, they called out near the entrance for the release of detained practitioners.

The lawyers were tortured in detention: police beat lawyer Tang Jitian and others, resulting in a total of 24 broken ribs among the four lawyers. Three Falun Gong practitioners were tortured to the brink of death.

Wang Yu, Zhang Weiyu, and six other lawyers have represented the four practitioners for about a year. They experienced harassment and interference while trying to perform their duties as defense counsels.

The four Falun Gong practitioners arrested in March are still detained and were recently tried. 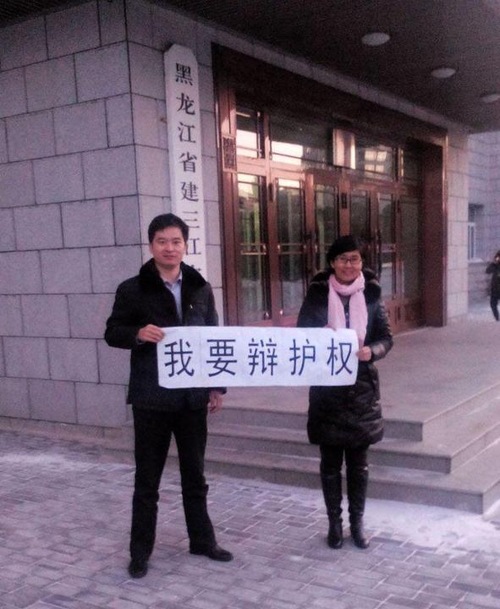 Lawyers Wang Yu and Zhang Weiyu protest in front of the Jiansanjiang Land Reclamation Court for their right to defend Falun Gong practitioners.

So far, more than 60 lawyers in China have joined the Jiansanjiang Law Support Group, which provides legal assistance to the lawyers and family representatives. The group demands an end to the unlawful trials and a revocation of the Land Reclamation Court's ruling.

Four of the practitioners' family members and lawyers Gong Xiangdong and Zhang Weiyu tried to visit the four practitioners at the Jiansanjiang Detention Center on January 28, 2015, but their request was denied. Instead, they were beaten and verbally abused by policemen directed by the head of the detention center.

“Third Trial in Same Court Ends Up with Same Outcome”

“Woman, 53, Recounts Years of Persecution for Talking to People about Falun Gong”