Taiwan: A Fung Shui Expert Changes the Direction of His Life

(Minghui.org) Mr. Qiu Shiyu, who is from the Annan District in Tainan City, was a geomancer with more than 20 years experience, specializing in fung shui and the I Ching. Throughout the years, he visited every temple in his district working in religious ceremonies and rituals and earning quite a reputation for himself. People in politics, economics, and business often asked him to handle their fung shui issues.

Even as a child, Qiu could see things in other dimensions that others couldn’t. Then, five years ago, an unforgettable experience led Qiu to Falun Dafa, forever changing the direction of his life. 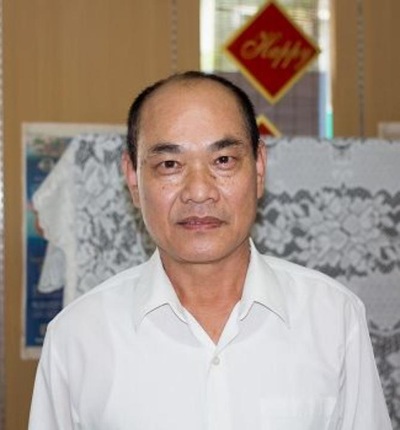 Over the years, Qiu had developed the habit of getting up at 5 o’clock every morning and doing his early morning run.

On October 15, 2009, Qiu got up at the sound of the alarm, slipped on his shorts and sneakers, and left home. As he approached a woodworking factory on Taijiang Boulevard, he could see from afar a man sitting in meditation at the factory entrance.

What surprised him was the light emitting from the man’s body. It was a golden light, very bright, and it reached as high as several stories, taller than the factory.

In his many years as a fung shui master, Qiu had encountered others who emitted light, but he had never seen such a golden glow, spreading so wide and reaching so high.

Qiu has always been able to see what others can’t see. When he started his geomancy trade, he would often see low level spiritual beings that glowed with a dim green light. Seeing the golden light that morning was a first.

The golden light Qiu saw really shook him up--it seemed as if a god was descending to earth--and it almost blinded him. He could see the golden glow clearly about 500 meters away. He wondered what it could be. When he was about 50 meters away, he could finally see a man sitting in meditation.

A thought popped up in his head, "Will this man want me to learn this?"

When he reached the man, the man suddenly stood up and said, "Young man, do you want to learn this?"

Qiu was shocked that the man could read his thought. The man continued, “We come here early every morning to do the exercises. They are simple and very easy to learn.”

Qiu promised he would be there the following day to learn the exercises.

That was how Qiu began to practice Falun Dafa more than five years ago.

Escaping Hell in a Dream

Qiu was invited to attend a nine-day seminar to watch the videos of Master Li Hongzhi’s lectures. On the evening of the fifth day, Qiu had a dream.

In the dream, he felt he was in hell. It was a vast, desolate wilderness with tall dead trees all around. He felt he had been there before because everything looked so familiar. He walked through the dead trees into a village and saw his parents waiting for him. They talked together for a long time. As he felt dawn approaching, his mother said, “Leave now, or the door will be closed and you can’t get out. Leave by the window. Do it fast or it’ll be too late.”

Qiu ran to the window and jumped. Then he saw a large group of people doing Falun Dafa’s third exercise. He had just learned this exercise. He felt fortunate to have escaped hell.

Qiu woke up and started to wonder what the dream was trying to tell him.

Before practicing Falun Dafa, Qiu was arrogant. He often thought to himself, "In the skills of divination, geomancy, or fung shui, I have no match."

After reading them, his arrogant attitude disappeared. He bought every Dafa publication and decided to read through all 38 published volumes. The more he read, the more insignificant he felt.

He thought, “Falun Dafa's principles are profound. Whatever I learned in the past was nothing in comparison. I’m totally impressed. I’ve finally understood the way of life. I’m actually walking on the path of life.”

Learning Humility, No Longer Fighting for Fame and Fortune

Before practicing Falun Dafa, Qiu was interested in fame and fortune. Wherever he went, dozens of people surrounded him, flattered him, and placed him on a pedestal.

After reading all the Falun Dafa writings, Qiu has come to the realization that, in order to truly cultivate and elevate to high levels, he must give up fighting for fame and fortune and be humble.

He decided: "I have to leave all this behind if I want to move forward. I have to give up fighting for fame and fortune. Otherwise, I won't get anywhere or achieve anything "

Before practicing Falun Dafa, Qiu used to be grumpy. Whenever anything did not suit him, he would curse openly and loudly. Those in attendance could do nothing but suffer in silence. He was bound so tightly by fame and fortune that he was completely unaware until Dafa opened his eyes.

In the five years since he began practicing Falun Dafa, Qiu has given up all his bad habits. He feels spiritually liberated and that he is now finally improving step by step.

His relatives and friends are amazed to see that he has become humble, sincere, and kind. They wonder what changed him

His wife tells them, "Qiu is now practicing Falun Dafa and living his life according to Falun Dafa’s principles of Truthfulness-Compassion-Forbearance. He is determined to live and act as a Dafa cultivator.”

Qiu feels very lucky. Now, he is always lighthearted and cheerful, a totally different person from before. In the past, he used to be burdened by fame and fortune. His wife now says he has been "turned into somebody wonderfully brand new.”

“Those Who Understand the Truth about Falun Dafa Are Protected”