(Minghui.org) Today's news from China includes incidents of persecution that took place in 9 cities or counties in 5 provinces. According to this report, 4 Falun Gong practitioners were subjected to mistreatment during their detention and at least 6 practitioners were illegally arrested. 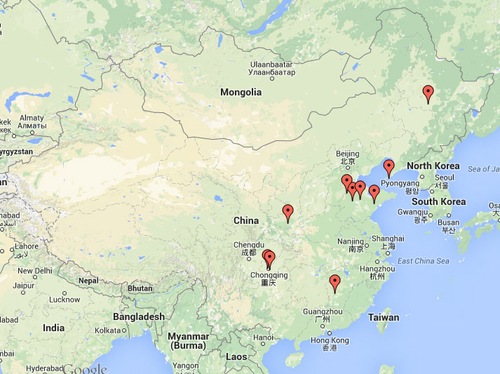 Ms. Geng Yanping, over 50, was arrested on February 10, 2015, by an officer from the Daminggong Police Station in the Weiyang District. She was distributing informational materials about Falun Gong in a northern suburb of Xian City.
2. [Jinan City, Shandong Province] Mr. Zhou Dongdong Detained

Mr. Zhou Dongdong was arrested on February 13, 2015, and held at Zhonggong Detention Center in Jinan City.

Three plainclothes officers from the Kai County Domestic Security Division broke into Mr. Wei Jiufu's home on the morning of January 27, 2015, and arrested him. They confiscated 300 yuan in paper bills that had positive messages about Falun Dafa printed on them and other informational materials. Mr. Wei was detained for 15 days.

Ms. Gong Yuxiu was arrested by officers from the Nanchang City Domestic Security Division on January 29, 2015.

Ms. Zhang Lili was arrested on September 28, 2014, and is now in the Harbin No. 2 Detention Center

Mr. Zhong Guirong was arrested at her home on February 10, 2015, by officers from the Dengshahe Police Station. Her money was confiscated.

Mr. Wu Kejian was arrested by officers from Shuangyang Town Police Station on March 24, 2014, for distributing informational material about Falun Gong. He was held in Gaomi City Detention Center. Mr. Wu was sentenced to three years in prison by Gaomi City Court in October 2014, and sent to Shandong Province Prison.

Ms. Li Huijun was at work when she was arrested by officers from the Dongdi Police Station in the Decheng District on the morning of February 10, 2015. Police confiscated 1000 yuan in paper bills with Falun Gong messages on them, Falun Dafa books, and a laptop. Ms. Li is being held at the Dezhou City Detention Center.

Ms. Zhai Shuxiang of Taihe Township was sentenced in the Zichuan District Court on December 30, 2014. She was just notified she was sentenced to seven years in prison. She is being held in the Zibo City Detention Center.

“Trial Aborted after Standoff Between Defense Lawyers and Judge”