(Minghui.org) “I just helped 28 Chinese tourists quit the Chinese Communist Party (CCP) in the past half hour,” said Ms. Xiao, standing outside the Galleries Lafayette department store in Paris. Ms. Xiao is a volunteer for the Global Service Center for Quitting the Party, an organization that exposes the truth about the CCP and helps people renounce their party membership.

The Eiffel Tower and the Galleries Lafayette, two major destinations for Chinese tourists in Paris, have gained a new importance for visitors from China. Through the efforts of volunteers from the Global Service Center for Quitting the Party, these popular landmarks have become sites where Chinese people have the opportunity to learn the real history of the CCP and the facts of the persecution of Falun Gong—both of which are covered up by communist propaganda in China.

Last year, hundreds of thousands of Chinese tourists viewed the display boards exposing the crimes of the CCP, and, with the help of Falun Gong practitioners who volunteer their time at the service center, about 30,000 renounced their membership in the Chinese Communist Party and its affiliated organizations. 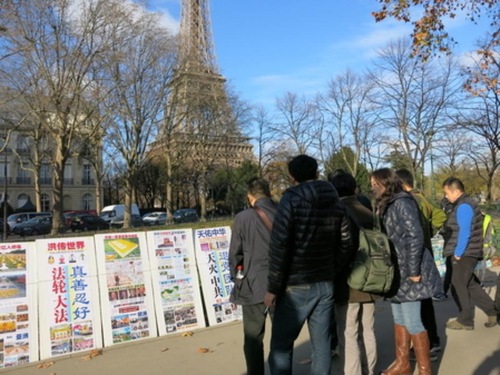 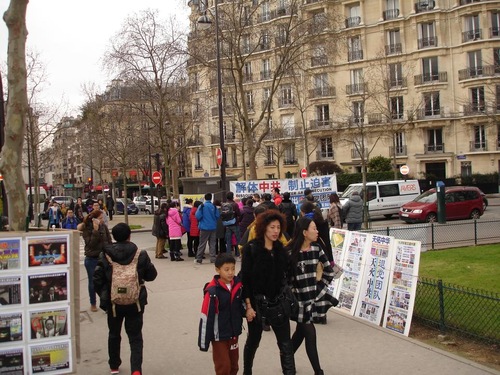 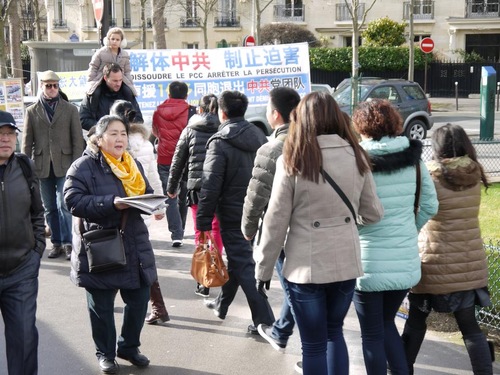 Falun Gong practitioners set up display boards at the Eiffel Tower, to tell Chinese tourists about the brutal persecution of Falun Gong in China and to expose the crimes of the scoundrel Chinese Communist Party.

“We are seeing more Chinese people here this year than we did at the same time last year,” a practitioner volunteer noted. “Many of them have already heard about the persecution, and are sick of the communist party. Our service offers them a chance to dissociate themselves from it.

“After reading our flyers, some Chinese people learned how to break through the Internet censorship in China. I ran into a tourist the other day who told me that he logged onto the website for the Service Center for Quitting the Party the day after he got our flyer, and published his withdrawal right away. He even helped his family and friends publish their withdrawals. He was very grateful for our efforts.”

A middle-aged Chinese gentleman told practitioners, “High-ranking party officials have stolen billions of dollars from the people, and sent their children overseas with the money. I feel ashamed to be a part of the corrupt party. Now, I feel so relaxed after announcing my withdrawal at your booth. Thank you very much.”

Six young men from China were happy to see the practitioners' booth. They came over and took some informational materials. “We long for freedom, and do not like the communist party,” one of them said. “We know well about the persecution of Falun Gong in China. It is great that you can freely practice Falun Gong here.” All six of them quit the Party.

Sometimes practitioners run into people who refuse to listen to them. One day, Ms. Jun, a volunteer at the service center, tried to talk to a young man who did not want to accept anything from her.

“In China you don't have access to the truth. Here, you may enjoy freedom of information,” Ms. Jun said.

“How much do you make every day by passing out flyers?” the young man asked, referring to the popular misconception that Falun Gong practitioners are paid by foreign governments to talk about the CCP and the persecution.

Ms. Jun replied, “We are all volunteers. I am a cultivator of Truthfulness-Compassion-Forbearance. I am telling you these things because I don't want you to go down with the party. It is for your own good. Quitting this evil organization will bring you a bright future.”

The young man paused and listened further. Ms. Jun told him that the party will be held accountable for all the crimes it has committed. “As a member, you will also share accountability because when you joined, you made an oath to devote yourself to the party. That is why I am asking you to quit it.”

“What you said makes sense,” responded the young man, clearly moved. “I would like to quit the Party. Please help me.”

He pressed his palms together in front of his chest in a gesture of respect, and thanked Ms. Jun several times.

“I Found the Way Home”