District Mayor of Cologne City, Germany: No One Should Keep Silent at Persecution of Falun Gong

(Minghui.org) The Art of Zhen Shan Ren International Exhibition toured to Cologne for the second time on January 30, 2015. The exhibition was open in the gallery of Altes Pfandhaus for over two weeks. More than 50 people, including local artists and politicians, attended the opening ceremony. 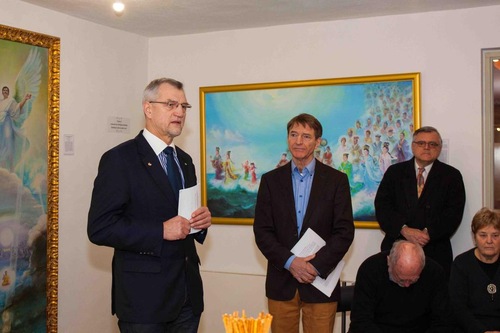 Mr. Andreas Hupke, the district mayor of Cologne City, spoke at the ceremony and stressed that no one should keep silent at the persecution of Falun Gong practitioners. He remarked that he would not care even if the Chinese regime denied his entry to China because he supported Falun Gong, because people should be able to voice their thoughts aloud.

Mr. Hupke also said that despite the fact that Cologne and Beijing are sister cities, Cologne should have the courage to voice their opposition to the persecution. He added, “I bow to the artists of these artworks and supporters of the exhibition. Let's strive for justice. The worst would be such things happen in people's silence. No one should keep silent when unfairness happens.” 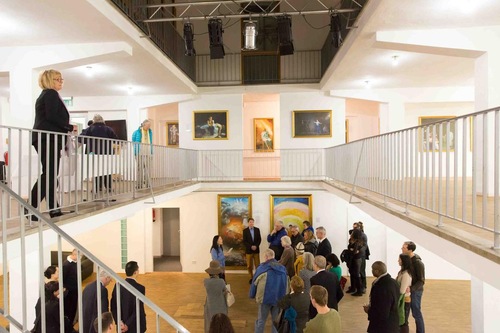 More than 50 local artists and politicians attended the opening ceremony.

Visitors to the art exhibition praised the artists' superb skill and expressed their strong feelings about the stories behind the artworks. 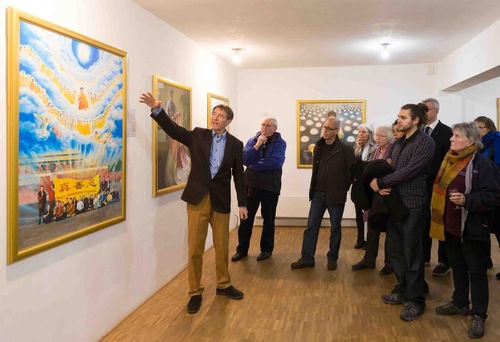 A guide explains the background of the artworks. 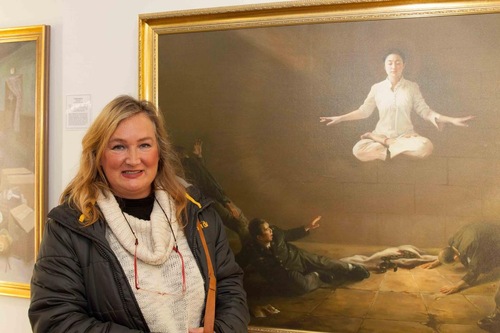 Ute Engels was touched by the painting “Shock”

Artist Ms. Ute Engels told the reporter she thought the organization of the exhibition made it easier for visitors to learn about Falun Gong. She said every painting told a thought-provoking story, and some were very touching, especially those about the persecution of Falun Gong practitioners.

Ms. Engels said, “The value of Truthfulness, Compassion and Forbearance is very important. I firmly believe the righteous will win. Everyone should work for this goal and remember the value [of Truthfulness-Compassion-Forbearance]. The exhibition showed me I need to spread the value to people around me. It's a good start for all aspects of my life.”

She added, “I wish I could do something right now to stop the persecution. We must tell the public on a large scale.” 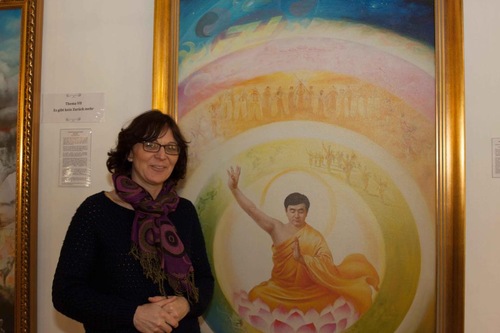 Jolanda, a gallery employee, told the reporter, “I always go to the important opening ceremonies and exhibitions...I'm deeply touched tonight. I didn't need to ask what the exhibition was about after looking at three pieces of artwork.”

Jolanda had heard about the persecution of Falun Gong in the media. She said, “I got a picture in my mind today, an absolutely gorgeous and rare picture–principles of Truthfulness, Compassion and Forbearance. I can tell the artists treated these principles seriously. And I can feel clearly their experience.” 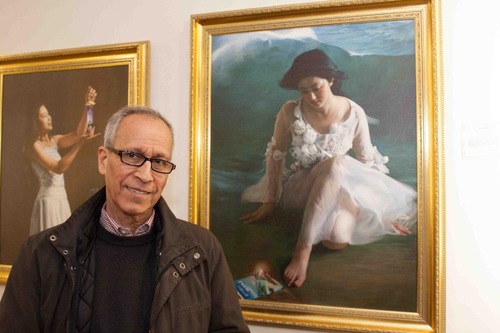 Mr. Ali Safaei-Rad, a news reporter, condemned the persecution as “appalling.” He said, “These innocent people have peace in their hearts, but they were killed. I'm shocked on seeing the painting about harvesting organs from living people. Such appalling crime is still going on in the 21st century!”

He added, “The exhibition gave me positive influence. This group of people pursue their faith and stayed firm in huge suffering. The artists are trying to spread information about this persecution so people in other countries would know exactly what's happening. I absolutely admire them.”

Many visitors left touching words on the signature book:

“I'm deeply touched by the great art! Thank you! Beauty and horror are in such close contact after all.”

“This is a top-notch art exhibition. You will feel a lot of overwhelming and unbelievable sadness, helplessness and courage, as if they are your own experience. These artwork has its own unique language.”“Thank you so much! I'm deeply touched by the realistic and moving artwork! It gives me courage to listen to my heart and hidden wisdom.”