(Minghui.org) Today's news from China includes persecution that took place in 12 cities or counties in 5 provinces. According to this report, 17 practitioners were subjected to mistreatment during detention, at least 12 practitioners were illegally arrested. 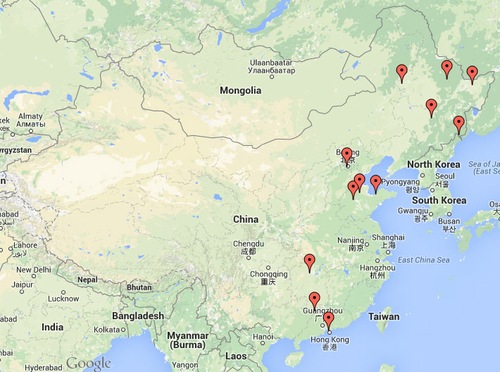 Mr. Ma Hengjunn was sentenced to five years in prison on January 26, 2015.

Mr. Liu Baoxin and Ms. Zhang Shue went to Xiaqiu Town and talked to people about Falun Gong on February 2, 2015. They were arrested by officers from the Xiaqiu Police Station and taken to the Lanzhou Detention Center.

Elderly Ms. Chen Jinqing was out talking to people about Falun Gong on February 1, 2015, when Binxi Police Station officers arrested her.

Ms. Cheng Yanhua was arrested on the afternoon of January 31, 2015, for talking to people about Falun Gong.

Ms. Xie Nuzi and Ms. Wei Hui were arrested on the West Campus of China Agricultural University in the Haidian District on January 30, 2015. They were taken to the Dongsheng Police Station in Wudaokou. Their whereabouts are unknown.

Mr. Xiong Hui is in Division Seven of Jinshi Prison in Changde. He was handcuffed for refusing to do slave labor. There are four cameras in the room where he is being held. Guard Deng Wei monitors him closely.

Ms. Zhan Shufen was arrested at her daughter's home by officers from the Domestic Security Division of Longjiang Police Department and the Heigang Township Police Station on January 26, 2015.

Mr. Wang Zhiqian from the Jinshantun District in Yichun was arrested in 2010 and sentenced to 12 years in prison. The Jinshantun Social Security Bureau has withheld Mr. Wang's pension since 2012 on the grounds that Mr. Wang was sentenced.

“Local Party Official Has a Change of Heart”