(Minghui.org) Today's news from China includes incidents of persecution that took place in 8 cities or counties in 6 provinces. According to this report, 8 Falun Gong practitioners were subjected to mistreatment during their detention, and at least 2 practitioners were illegally arrested. 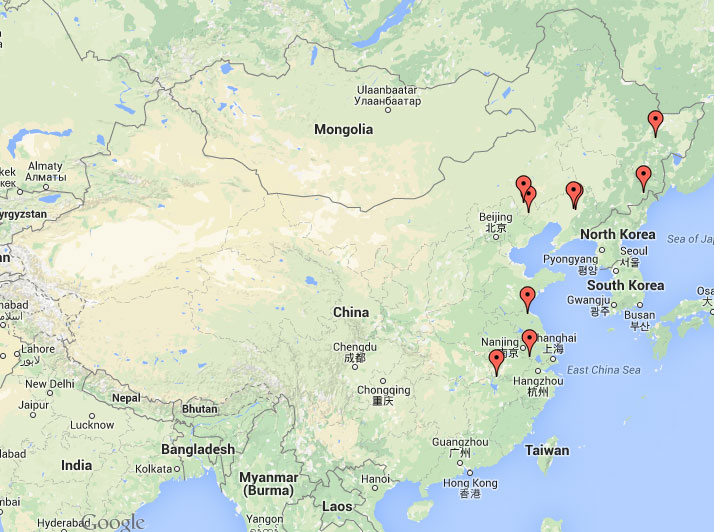 Ms. Niu Guixiang from Shenyang City filed an appeal after being illegally sentenced to four years in prison. Cao Shijun, presiding judge of the No. 2 Criminal Tribunal of the Shenyang City Intermediate Court, did not hold a hearing. The court just went through the motions in early 2015, and upheld the original judgment.

Ms. Zhang Meiying, 58, from Liyang City, was sentenced to three years in prison. She was taken to the No. 10 Ward of the Nanjing Women's Prison. She was mistreated and her hands and feet swelled. In less than a month her rheumatoid arthritis resurfaced. She had difficulty walking, but the guards still forced her to do slave labor. Her family requested medical parole, but was flatly rejected by Zhou Hefu, deputy head of the Liying City 610 Office.

Ms. Zhang was arrested on November 8, 2013. Ms. Huang Wenqin, 46, an employee of the Qingan Hospital, was arrested the same day. Both practitioners were taken to the Changzhou City Detention Center, where they were physically abused and brutally tortured.

On April 4, 2014, the Liyang Court sentenced Ms. Huang to four years in prison and Ms. Zhang to three years to prison. Ms. Zhang was taken to the Nanjing Women's Prison. Ms. Huang died on October 22, 2014 after being persecuted.

Ms. Du Xiuju, a teacher, was arrested during a large-scale arrest in Lianyungang on September 17, 2014. She is being held in a detention center. Despite Ms. Du and her lawyer's convincing not-guilty defense during the court hearing, she remains in custody. Ms. Du went on a hunger strike to protest. For 22 days she has not had anything to or drink, and her life is in imminent danger.

Ms. Yang Xiubo, from the Shenbei New District, Shenyang City, was arrested by officers from the Cailuo Police Station on January 24, 2015 for talking to people about the persecution of Falun Gong in Cailuo Town.

Mr. Li Huzhe, from Yanbian Korean Autonomous Prefecture, Yanji City was arrested and taken to the Yanji City Detention Center on October 7, 2014. It has been reported that the Yanji Court is planning to give Mr. Li a harsh prison term.

Ms. Sun Xiqin was reported on by a police officer named Ma Changsheng. She was distributing informational materials about Falun Gong on the morning of January 25, 2015. She was arrested by officers from the Huanan County Domestic Security Division. The officers ransacked her home and confiscated a computer, a printer, Falun Dafa books, and other personal items. Ms. Sun is being held in the Hualin Detention Center.

Ms. Xu Changmei, in her 50s, from Pengze County, was arrested by police from the Quanshan Police Station around January 9, 2015 for posting Falun Gong informational stickers in Quanshan Town, Pengze County. The police took her cell phone which she was using to clarify the facts about Falun Gong.

Ms. Xu jumped out of the police vehicle. She ran into a building, which was under construction on the roadside. Several officers chased after her. Ms. Xu jumped from the building and was injured. Her bones were dislocated.

Ms. Wang Yuying, from Xinglongjie Village, Xizi Town, Ningcheng County, Chifeng City, was arrested by officers from the Xiqiao Police Station on December 10, 2014 for distributing Falun Gong materials. The police ransacked her home. She was held in Jinshan Town, Harqin Banner. Eight days later she was released after the police extorted 30,000 yuan from her family.