(Minghui.org) The White House responded on Friday, January 30, 2015, to the petition submitted to its website “We the People” about three years ago, which called for investigating and condemning the Chinese Communist Party's (CCP) live organ harvesting from Falun Gong practitioners.

The World Organization to Investigate the Persecution of Falun Gong (WOIPFG) has investigated and recently published a list of 865 hospitals and 9,500 medical professionals involved. Based on postings on Chinese hospital websites and papers published in medical journals, these hospitals had, as of September 2014, completed transplantations of at least 176,267 kidneys, 40,170 livers, and 137,294 corneas.

The European Parliament passed a resolution on December 12, 2013, calling on the Chinese communist regime to “immediately stop organ harvesting from prisoners of conscience, religion and minority groups.” 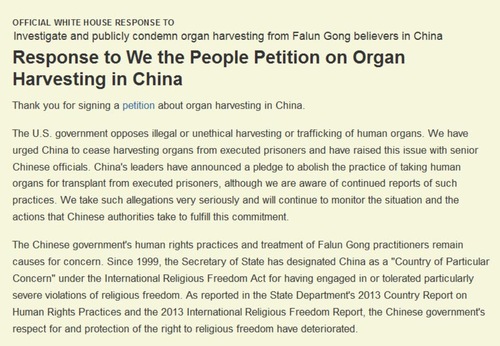 The White House responded on January 30, 2015, to the petition calling for investigation and condemnation of the CCP's forced live organ harvesting. (Image from the website)

The White House responded, “The U.S. government opposes illegal or unethical harvesting or trafficking of human organs. We have urged China to cease harvesting organs from executed prisoners and have raised this issue with senior Chinese officials. China's leaders have announced a pledge to abolish the practice of taking human organs for transplant from executed prisoners, although we are aware of continued reports of such practices. We take such allegations very seriously and will continue to monitor the situation and the actions that Chinese authorities take to fulfill this commitment.

“The Chinese government's human rights practices and treatment of Falun Gong practitioners remain causes for concern. Since 1999, the Secretary of State has designated China as a "Country of Particular Concern" under the International Religious Freedom Act for having engaged in or tolerated particularly severe violations of religious freedom. As reported in the State Department's 2013 Country Report on Human Rights Practices and the 2013 International Religious Freedom Report, the Chinese government's respect for and protection of the right to religious freedom have deteriorated.”

The CCP regime's genocidal policies against Falun Gong have instigated the state-orchestrated crime of forced live organ harvesting, in which Falun Gong practitioners are executed for organs without public announcement. The CCP regime has admited, under pressure from the international community since 2006, that the organ transplants are from executed prisoners. But the number of announced death sentences has decreased year by year, which is not consistent with the exponential growth in organ transplants since 2000. Therefore, the unannounced execution of Falun Gong practitioners for organs is likely the primary source of human organ trafficking in China.

The petition on the website “We the People” collects signatures, and requests that the Obama Administration publicly condemn the CCP's atrocity of live organ harvesting from Falun Gong practitioners and other detainees. The petition points out that live organ harvesting are crimes against humanity. The crimes have been happening in China for over ten years. As a world leader in protecting human rights, the U.S. has a moral obligation to expose these crimes, stop them, and ensure that the perpetrators are brought to justice.

The petition was initiated by professor Arthur Caplan, an expert on medical ethics research, doctor Alejandro Centurion, a neurologist in California, and professor Jianchao Xu of Yale Medial School. Currently 34,000 people have signed the petition.

“Seizing Every Opportunity to Save Sentient Beings”