(Minghui.org) Chen Deming, president of the The Association for Relations Across the Taiwan Straits (ARATS), a Chinese Communist Party (CCP) organization, visited Taiwan on November 30, 2015, and was met by Falun Gong practitioners protesting wherever he went. He planned to visit eight counties and cities during his one-week visit.

Chen followed Jiang Zemin, former head of the CCP, who initiated the persecution of Falun Gong, by actively participating in the persecution. Chen was appointed as General Secretary of the CCP Committee in Suzhou City, Governor of Shaanxi Province, Deputy Director of National Development and Reform Commission, and other posts. He ordered persecution in Shaanxi Province from May 2002 to July 2007. At least 36 Falun Gong practitioners in Shaanxi were tortured to death due to police violence during this time.

Chen met with protests when he arrived at Tanyuan Airport and during his visits to Taoyuan, Keelung, and Yilan. Falun Gong practitioners held large banners reading, “Support Chinese People Filing Criminal Complaints Against Jiang Zemin” and “Stop the Persecution of Falun Gong.” They shouted “Bring Jiang Zemin to justice” and “Stop the persecution of Falun Gong” when Chen's motorcade passed by and at his other destinations. 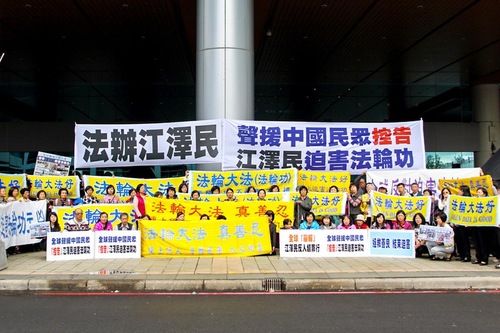 Local resident Mr. Chen said that diverse cultures, human rights, and religious beliefs are respected in Taiwan, and persecution of beliefs is not acceptable. Miss Chen said that Taiwan was a democratic country, and human rights violators should not be invited to visit Taiwan.

“Perpetrators Not Welcome in Taiwan.”

Chen visited Chi Nan Palace in Yilan on December 3, where he encountered more protests. Falun Gong practitioners held large banners and shouted “Stop the persecution of Falun Gong” and “Falun Dafa is good.” The strong voices of protest were heard inside the temple when Chen and his delegates were there. Police officers on site expressed understanding and respect for the rights of the protesters. 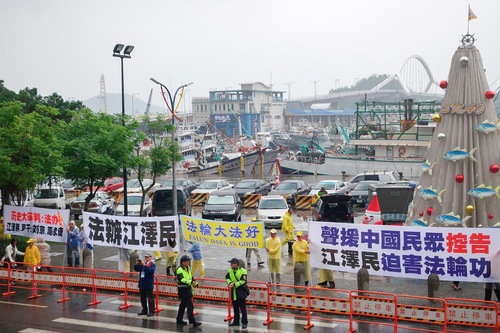 Practitioner medical doctor Mr. Chen said, “Yilan County Council passed a resolution on December 21, 2010 to deny entry to Chinese human rights violators. Yilan governments at each level, and non-governmental organizations, are requested to not invite, welcome, or accept Chinese officials who are involved in human rights violations. Chen Deming actively participated in the persecution, and infringed human rights. The people of Yilan do not welcome the perpetrator.”

Nearly 200,000 Chinese People File Criminal Complaints Against Jiang, and Over 770,000 in Asia Jointly Report His Crimes

Nearly 200,000 Falun Gong practitioners and their family members have filed criminal complaints with the Supreme People's Procuratorate and the Supreme People's Court against Jiang Zemin since May 2015. The global reporting of Jiang's crimes, urging prosecuting him, has received strong positive response. Over 770,000 people have joined the reporting to request stopping the persecution of Falun Gong and bringing Jiang to justice.

In Taiwan more than 370,000 people have joined the reporting against Jiang. Chiang Cong-yuan, mayor of Yilan City, signed the joint reporting ten days before Chen's visiting to support the lawsuits against Jiang.

It was expected that Chen would meet with many protests during his visit. During his visit two years ago, he left in a hurry and panic upon encountering similar frequent protests.

“The Path of Cultivation is Naturally Wrought with Struggle”