(Minghui.org) Since May 2015, over 200,000 Falun Dafa (also known as Falun Gong) practitioners, their families, relatives, and friends have filed lawsuits against Jiang Zemin with the Supreme People's Court and Supreme People's Procuratorate. Many others across the globe have joined the effort by signing petitions in support of these lawsuits.

In the Baoding area of Hebei Province alone, 2,370 residents have signed the petition to support bringing Jiang Zemin to justice since December 1, 2015. Below are a few examples of what they told the practitioners who were collecting signatures (or fingerprints for those that preferred to lend their support that way). 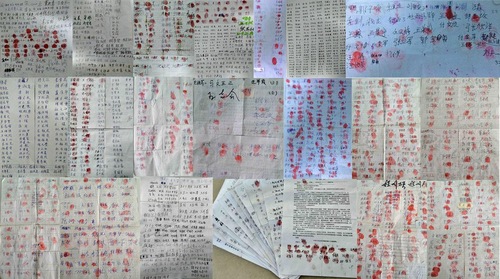 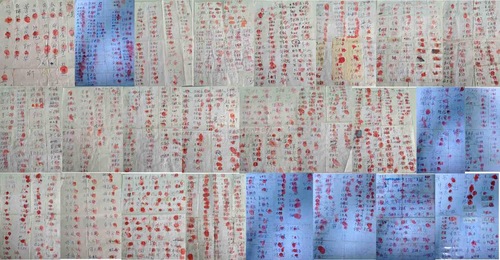 Signatures and fingerprints on a petition

“It's About Time He Was Brought to Justice”

When asked whether she feared retaliation for signing the petition, a lady in her 70s said, “No, I don't. Organ harvesting is such a heinous and barbaric crime. Jiang should have been brought to justice long ago.”

After signing the petition a man said, “Jiang has done such truly terrible things. How can he go unpunished?”

A worker on the city cleaning crew said, “Falun Gong practitioners are so kind. One winter I saw a practitioner give his own coat to a homeless person. The practitioner walked home in the cold himself. Such incidents are commonplace. It is unjust that such a group of good people have been persecuted by Jiang Zemin and his political faction. I want to be a part of bringing him to justice.”

A farmer said, “The Party's days are numbered. Most the Party officials are corrupt, and now they are incurring karmic retribution for their crimes. I fully support suing Jiang Zemin. It's about time he was brought to justice!”

A worker said, “I have been reciting 'Falun Dafa is good' and wearing a Dafa amulet every day. In 2007, I was working underground in a coal mine when a huge chunk of coal rolled down the tunnel toward me. The only thing I could do was say, 'Falun Dafa is good.' The coal somehow went sideways and hit the side of the tunnel instead of me. It was Falun Dafa that saved my life.”

Earlier this year, he said, he accidentally dropped a 40-kilogram piece of slate on his left foot. Amazingly, no bones were broken, and he was able to return to work after resting for a week. He was thankful to Falun Dafa and said he would support the lawsuits being filed against Jiang Zemin. He and his whole family signed the petition.

A young girl recounted how her parents started practicing Falun Dafa in 1996 and became healthy, but all that changed after Jiang Zemin started the persecution in 1999. Her mother was sent to forced labor camps and brainwashing centers multiple times, and her father was sentenced to 11 years in prison in August 2000 for practicing Falun Dafa. She was in the fourth grade and her sister was in the first grade at the time.

Their elderly grandparents were the only ones who could take care of them. She and her sister were often ridiculed and bullied at school. Before she could finish middle school, she was forced to quit and go to work. Her grandmother passed away in 2009, still worried about her imprisoned father.

She said, “My story is just one of thousands. So many Falun Dafa practitioner families have been victims of Jiang Zemin's terrible persecution policy. We all should step up and join the effort to sue Jiang and bring him to justice.”