(Minghui.org) The Taichung City Council recently passed a bill condemning the Chinese Communist Party's (CCP) persecution of Falun Gong and supporting the hundreds of thousands of lawsuits filed against Jiang Zemin. The bill, passed on December 23, 2015, also condemns the CCP's brutality of forced organ harvesting from living Falun Gong practitioners and other prisoners of conscience. The bill was co-signed by city council members across different parties. The Yunlin City Council has also passed a bill to urge the CCP to stop the live organ harvesting and to immediately release imprisoned Falun Gong practitioners. 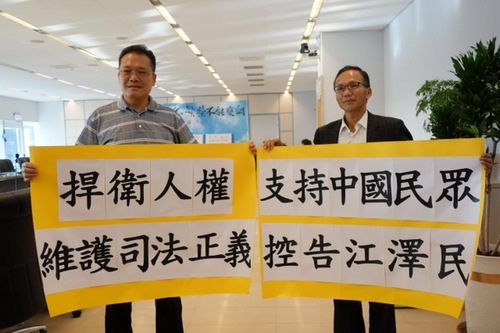 City Council Member Chen Cheng-tian (left), one of the sponsors of the bill, strongly condemns the CCP's live organ harvesting from Faun Gong practitioners. He holds a large poster with the words “Safeguard human rights and justice.” The poster on the right is worded “Support Chinese people in their lawsuits against Jiang Zemin”. 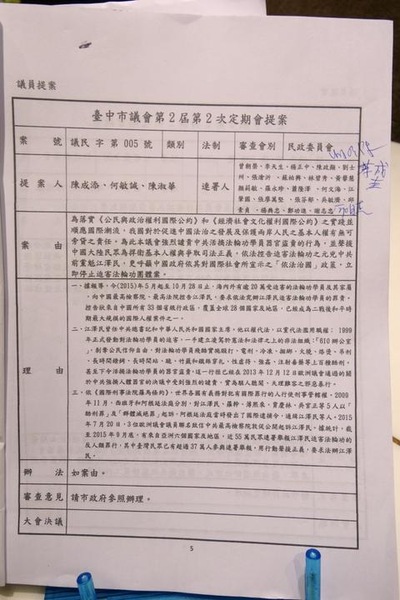 The bill supporting the lawsuits against Jiang was sponsored by three city council members and co-signed by 24 members of the Taichung City Council. It was passed in the council on December 23, 2015.

The Taichung City Council is the second city council after Kaohsiung to call on the CCP to stop the persecution. City Council Member Chen Cheng-tian, one of the bill's co-sponsors, declared that the inhuman treatment of Falun Gong practitioners in China is unacceptable. He said that the signing of the bill represents the wish of the local residents. 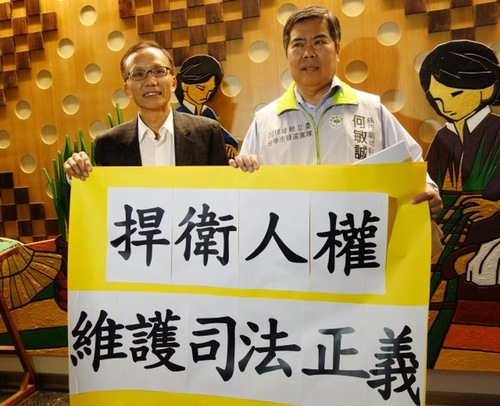 City Council member He Min-cheng (right), a co-sponsor of the bill, holds a poster worded “Safeguard human rights and justice.”

City Council Member He Min-cheng said that Taiwan should help stop the persecution of Falun Gong as have other countries across the world. He said that Jiang is the main culprit of the persecution and that expressing support for the lawsuits against him is a righteous act. He believes that so many city council members signing the bill will draw the attention of the mainlaind Chinese leadership. 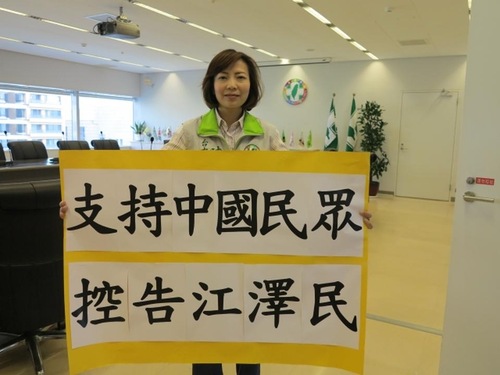 City Council member Chen Shu-hua, one of the sponsors of the bill, holds a poster worded “Support the Chinese people in their lawsuits against Jiang Zemin.”

City Council Member Chen Shu-hua, another sponsor of the bill, said that the City Council passed the bill and wished to help bring justice to the Chinese people. She called on other city councils to follow suit. 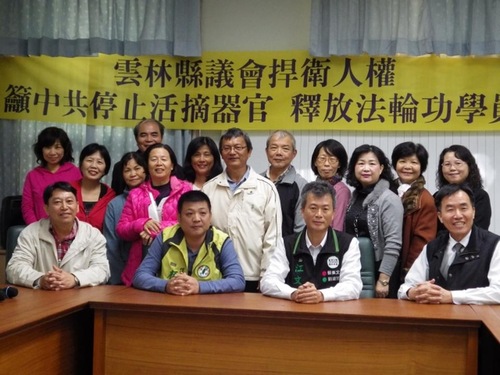 The Yunlin City Council passed a bill co-signed by city council members on December 25. The bill urged the CCP to stop live organ harvesting and to release incarcerated practitioners. City Council Member Chiang Wen-deng said, “As city council members, we should condemn this inhuman persecution.” He requested the central government to deny entry of those Chinese officials involved in human rights infringement.

City Council member Li Chian-sheng stated, “The CCP treads upon human rights for its own political purpose. Not only the City Council but all people in Taiwan condemn the Party.”

City Council member Yan Hsu-mao said that forced organ harvesting from living people is immoral, and is a crime that can only happen in a communist country.