(Minghui.org) “I’ve heard of Jiang Zemin,” said an elder man in his seventies in Tokyo, Japan, to a Falun Gong practitioner collecting signatures recently, “He is so bad. His heart is as black as my black jacket. You keep up your good work.”

Over 63,000 people from Kumamoto, Okayama, Hiroshima, Osaka, Nagoya, Shizuoka, Nagano, Tokyo, Fukushima, Sendai, and Ibaraki in Japan have signed a petition to jointly report Jiang Zemin's Crimes, as of late November. This signature collection is a part of global effort to jointly report his crimes.

1,009,784 people from Japan, South Korea, Malaysia, Singapore, Indonesia, Hong Kong, and Macau signed the petition to report the Jiang’s crimes between July 1 and December 7, 2015. A portion of the signatures have been sent to China's Supreme People's Procuratorate and Supreme People's Court. Delivery confirmation with signature was received, confirming 388,148 signatures sent to the Procuratorate and 322,741 sent to the court. 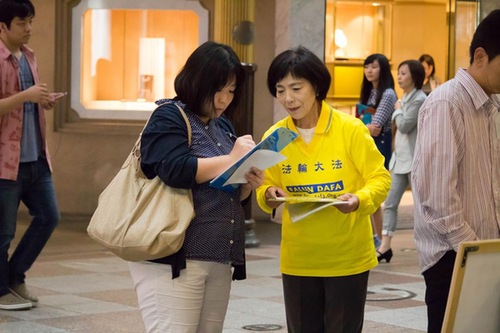 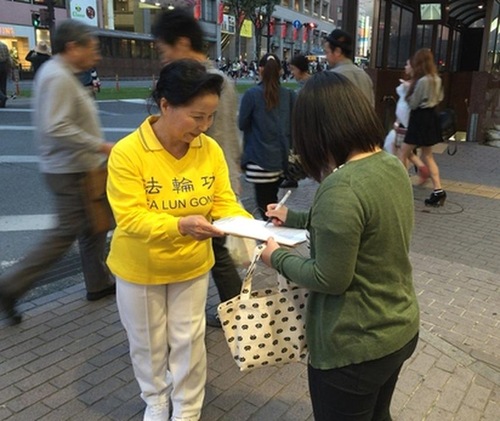 The practitioners collected signatures in Nagasaki in mid-November. Nagasaki is an international city, where local residents have strong sense of justice. Many people signed the petition after learning about the persecution.

One assistant professor did not sign after accepting a flyer, but he returned later to sign the petition after looking for relevant information online at home. He said, “I have learned that Falun Gong is a good practice to improve personal character and morality. It is interesting.” 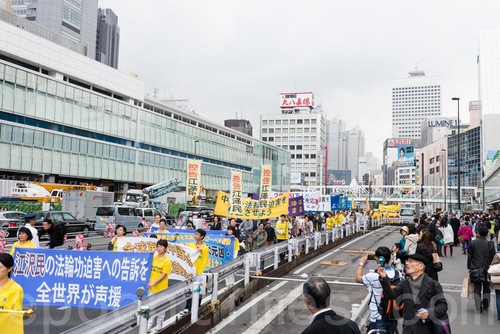 Falun Gong practitioners hold march to support the lawsuit against Jiang in Shinjuku, Japan on November 7, 2015.

Falun Gong practitioners held a march in Shinjuku, Japan on November 7, 2015, to support the lawsuit against Jiang. Many people came forward to ask for fliers and sign the petition.

“I cannot believe that such inhumane things happen in China,” said an older lady after seeing the photos showing the live organ harvesting in the march, and signing the petition, “It is horrible. Those being persecuted are miserable.”

A Japanese Chinese said after signing the petition, “I know that Falun Gong is good and can heal many illnesses. Falun Gong practitioners are good people. You work hard. I support you.”

A student from South Korea saw the Korean language petition, and said it was her first time hearing about Falun Gong. She read the petition and learned about Jiang's crimes. She said, “It is to send to China. So I signed it in Chinese.”

A caucasian man saw the petition in English and knew it was about Falun Gong. He signed right away and explained it to his Japanese lady colleague. The lady signed the petition too, and said before leaving, “It is cold. You work hard. Let me buy a cup of coffee for you.”

In 1999, Jiang Zemin, as head of the Chinese Communist Party (CCP), overrode other Politburo standing committee members and launched the violent suppression of Falun Gong.

Jiang abused his power in orchestrating the persecution, leading to over 3800 confirmed deaths of innocent practitioners due to police violence. Millions of practitioners suffer tortures in prisons, detention centers, and brainwashing centers. Many were even killed for their organs. Jiang Zemin is directly responsible for the inception and continuation of the brutal persecution.

Chinese law allows for citizens to be plaintiffs in criminal cases, and many practitioners are now exercising that right to file criminal complaints against the former dictator this year.