The major Sundsvall newspaper, Sundsvalls Tidning, reported the event on September 28 with an article titled “Forbidden Art Has Come to Sundsvall.” In addition to describing Falun Gong's principles of Truthfulness-Compassion-Forbearance and its benefits on mind and body, the article talked about the severe suppression in China, especially the Chinese regime's forced organ harvesting from living Falun Gong practitioners.

The article noted that the exhibition has been held in more than 300 cities in 50 countries, and also highlighted the efforts of practitioners worldwide to oppose the persecution in China. 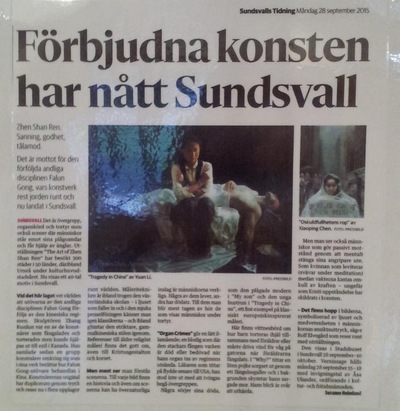 The Sundsvall government supported this cultural event and provided a location in City Hall without charge. The chairwoman of the Cultural Committee attended the opening ceremony and recommended the exhibition to the public.

Many people, including artists, came to the exhibition. Several teachers brought their entire classes, to discuss both social studies and art.

Below are comments left by visitors in the guest book:

“It is very touching because these artworks have extraordinary energy. And they are relaying an important message. Thank you very much.”

“These paintings have a high artistic value. The exhibition also educated me about the ongoing brutal torture in China, something I did not know about before. We should report this important information in our news media and include it in school textbooks.”

“Everyone needs to come and see this exhibition.” 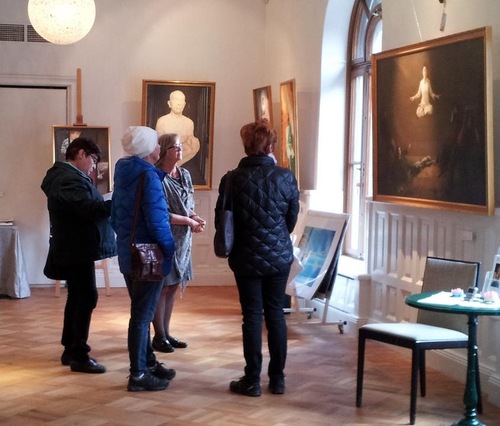 Taking in the artworks in Sundsvall, Sweden.

Rolf, a Swede who helped organize the Sundsvall exhibition, has enjoyed art since he was young and has done some painting. “To me, these are excellent artworks, because they represent genuine art and carry important messages.”

Rolf attended a workshop when Mr. Li Hongzhi, founder of Falun Gong, visited Sweden in 1995. He had been to China before the persecution started in 1999. “When I stayed with Chinese practitioners, we each felt like we were part of a big family and there was no barrier between us,” Rolf recalled.

Since the persecution began in 1999, he and many other practitioners have worked hard raising awareness of the brutality taking place in China. “With help from more people,” Rolf said, “We hope that this suppression will end soon.”