(Minghui.org) The 2015 Falun Dafa Cultivation Experience Sharing Conference in the Northwest U.S. was held in Seattle on October 31, 2015. Practitioners from Washington and Oregon attended the conference, where 13 practitioners shared their experiences in saving people and looking inward. 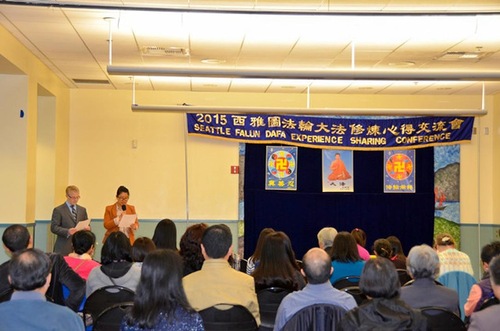 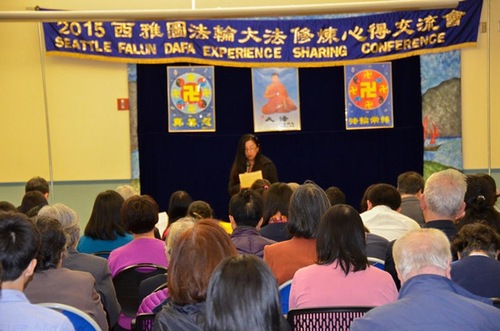 Ms. Lin joined the local Shen Yun promotion after moving to Seattle from China. She walked eight hours every day for almost six months, delivering the Shen Yun flyers door-to-door. She fell and hurt her feet many times, but she always eliminated the interference by sending forth righteous thoughts, and the injuries did not hamper her progress.

Fellow practitioners often criticized her behavior and speech during the promotion activities. At first, Ms. Lin thought that what they pointed out were trivial things, and didn't pay much attention to them. The fellow practitioners also pointed out that she had been deeply influenced by the Communist Party culture. She didn't believe that either.

Later, after reading the Fa more and more intensively, Ms. Lin saw her human notions and attachments, especially the competitive mentality. Many attachments, which were hidden when she was in China, surfaced in the overseas environment. She realized that she needed to cherish every opportunity to cultivate when conflicts surfaced, and correctly treat the conflicts, to cultivate herself.

Amy was not happy when with an assignment she received during the Shen Yun promotion, and hoped that other practitioners could share the burden with her. She immediately read the section regarding jealousy in Zhuan Falun, and realized that her unhappiness stemmed from jealousy. She was jealous of other practitioners, who had “better” assignments.

Amy also realized that her thoughts were based on what she wanted. “If our thoughts are based on what Master wants, then we will be always happy no matter what we do,” Amy said. While reading the Fa, Amy changed her mind, and put down her attachment. “The change was spontaneous, not due to any external force,” she said.

Professor Yang taught psychology in China for decades. His job was studying people, and applying the results of the study to judge, educate, and change people. When he first started cultivating, out of professional habit, he criticized fellow practitioners, which caused some conflicts. Practitioners told him that his profession was causing interference with others on the project.

Professor Yang didn't understand, but he decided to look inward, as Master taught practitioners to do. He found that he had formed the strong notion and habit of “educating and criticizing others” over decades of being a teacher. He often put himself above others, and talked to others with the thought that they should not question his words. “With these notions, one might be able to be a good teacher in everyday society,” he said, “but they are not acceptable for a practitioner.” Professor Yang was happy that he found his attachments.

Many attendees were touched to tears by the sharing. Practitioners appreciated the chance to share, as it encouraged everyone to become more diligent in doing the three things.