(Minghui.org) Grafton Street is known as one of the most expensive shopping areas in the world. Many Chinese tourists seeking high end stores here have discovered information about Falun Gong, a meditation that has benefited about one hundred million people worldwide. 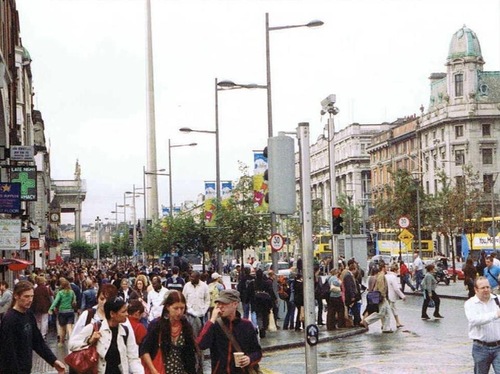 “You Will Be Blessed For Your Good Deeds”

As an older couple went past a luxury watch store on October 31, they saw the Falun Gong practitioners' booth and stopped to chat.

“Both of my children live in the United States and we visit them every year,” said the husband. He said they had learned about Falun Gong there.

After the couple decided to quit the CCP organizations, the husband said he knew Falun Gong also belongs to the Buddha school of practices, “You will be blessed for your good deeds.”

March in Dublin by Falun Gong practitioners on July 11, 2015

“I Have Been Waiting for This for a Long Time”

When practitioners talked with a tour group, one tourist went to the booth and said, “I have been waiting for this [quitting the CCP] for a long time. Please tell me how.”

The practitioner explained to him that as long as he wanted to sever ties with the organization, she could help register his name at the Epoch Times website, “Because of the ongoing persecution in China, even a pseudonym will do.”

The man agreed, as did another tourist standing next to him.

This man, Mr. Gao, is from Northeast China. Having attended lectures by Mr. Li Hongzhi, founder of Falun Gong, many years ago, he did not begin to practice, “But I know the CCP is rotten to the core. Jiang Zemin has committed sins for persecuting Falun Gong and its principles of Truthfulness-Compassion-Forbearance.”

Seeing copies of the Nine Commentaries on the Communist Party on the table, Mr. Gao took three. After the book was published in November 2004, over 210 million people have announced their decision to quit the CCP organizations.

Being Responsible for Your Own Life

After hearing that Mr. Gao had renounced his membership in the communist party, a young couple in the tour group also came up and asked some questions. The husband agreed to quit the communist party organizations, but the wife was hesitant.

The practitioner explained to her that since everyone had vowed to devote his or her life to the communist regime at the joining ceremonies of these organizations, it's important to publicly announce the decision to withdraw, “We have to be responsible for our own lives.”

The wife was worried about whether she would run into trouble after going back to China. Upon hearing that a pseudonym would work, she agreed to quit the organization.

Another tourist asked a practitioner, “You know that Falun Gong is banned in China. Do you have similar problems here?”

“No, not at all,” replied the practitioner with a smile, “We can join the parade or protest in front of the Chinese Embassy. And police always helps us with that.” She said Falun Gong is well received in over 100 countries and suppressed only in China.