(Minghui.org) Justice has always meant everything to Alejandro Nadal. Even as a child, he would stand up for other kids being bullied and couldn't understand why someone would want to pick on others.

He always sided with the American Indians while watching American Western movies and imaged himself jumping into the movie to help them out. 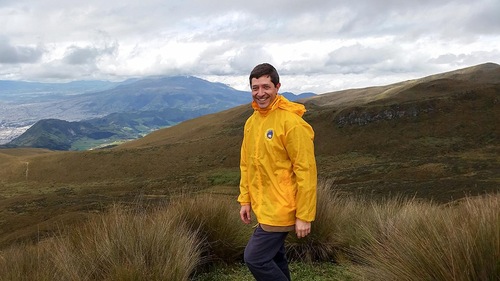 Alejandro was born and grew up in Madrid, but for as long as he can remember he has always sensed a strong relationship with China. He chose the Chinese character “Yi” as a tattoo when he was young because the character means “justice.” He later learned that the character has a deeper, more profound meaning.

As a documentary producer, Alejandro often picks topics related to China when making short documentaries, because he can relate to the virtues of traditional Chinese culture.

He also studied Chinese philosophy and culture, and did Tai Chi.

So when Alejandro heard about a Chinese-American jailed in China for speaking up for a group of people being persecuted for their belief in Truthfulness-Compassion-Tolerance, he naturally wanted to help.

Why Are Good People Persecuted?

In 2006, Alejandro was working on a documentary about human rights violations in Burma. During his research on the topic he kept being led to stories about Falun Gong practitioners in China being persecuted by the Chinese Communist Party (CCP). This information surprised him because he has a lot of channels through which he acquires information and news, but he had not heard any official reports on such severe human rights abuses.

As Alejandro read more about the persecution of Falun Gong, he couldn't understand why people would be persecuted for living upstanding lives and helping others. He questioned, “Truthfulness-Compassion-Tolerance is such a simple and basic principle; why is it causing people to be persecuted?”

Then he realized, “Those Falun Gong practitioners want to be truly good people. I want to be a good person too, so the practice resonated with me.”

His research on the history of the CCP helped him understand the cause of the persecution. Alejandro noted, “The Communist Party established itself based on lies, so it can't tolerate Falun Gong's teaching people to be truthful, because they'd lose their control over people if everyone spoke the truth. If every Chinese person practiced Falun Gong then no one would be on the Communist Party's side because no one wants to be part of a big lie.”

When he read about Charles Li, a Chinese-American jailed in China for 3 years, he decided to change the topic of his documentary to Charles Li and the persecution of Falun Gong.

When Alejandro made the decision to document human rights abuses against Falun Gong practitioners in China, he was at point in his life where he was questioning his life and career path and he was depressed.

As he continued with his research, Alejandro came across an online post about a local Falun Gong practice site. In order to find out more about the practice, he joined a group of practitioners to learn the exercises and read the Falun Gong books.

Alejandro was impressed with Falun Gong because the group had no mandatory regulations and no rituals, which suited him, as he preferred to be independent and not officially affiliated with any organization.

In order to complete his documentary, he traveled to the U.S., spending time in New York and Washington, DC.

Benefiting from the Practice

Alejandro found his experience in the United States beneficial to his practice. Besides pursuing his research, he joined other practitioners in doing the exercises, studying the Fa and he learned how to send forth righteous thoughts. He could feel a sense of a happiness returning to his life, and he stopped taking medication for his depression.

“I felt like my body was light and floating when I left my apartment after practicing the exercises and studying the Fa,” Alejandro recalled. “Strangers on the street smiled to me. They were unfriendly a few weeks before when I first arrived in New York.”

Alejandro's time in America was very productive. He completed his documentary and returned to Madrid three months later.

His mother was surprised to see him looking so radiant and hearing that he no longer needed anti-depressants. When she learned that her son's dramatic changes were because of Falun Gong, she began to read Zhuan Falun too.

Alejandro's relationship with his mother used to be very confrontational. He thought his mother was a highly controlling person who often held a negative attitude towards his decisions. She objected to his trip to New York and challenged him, “What can you do over there? Do you think you can you change the world with your documentary?”

Before, Alejandro would rebut his mother with comments like “This is my life,” or, “It's none of your business,” and “Leave me alone!”

However, after returning from New York Alejandro's parents and sisters could see the positive changes in him. He became more friendly and considerate of others, and was less confrontational with his parents.

He found a good job with a movie production company and still has time to help raise awareness of the persecution of Falun Gong in China.

His family now supports him in his work.

“China is the second most influential country in the world,” Alejandro commented. “It affects almost everyone's life, because almost all of us use something made in China. However, there are rarely any true reports [about the persecution of Falun Gong] in the Spanish media. China's state-controlled media are exporting their propaganda to the rest of the world.”

So he utilizes his language skills to translate news about the true happenings in China. “I want Spanish-speaking people to learn the truth and not to fall for the deceitful propaganda. My heart is with the Chinese people.”

Alejandro was saddened to hear that many Falun Gong practitioners are tortured and imprisoned. However, he could understand the behavior of the police and prison guards as well.

“They are controlled by their bad side. I believe they also have a kind side like everyone of us,” he explained. “People in China today almost worship money, which allows their bad side to control them. I can understand this.”

Alejandro added, “I believe that Traditional Chinese culture can give a lot of advice to the rest of the world. You must be proud to be Chinese because you have a rich and profound culture.”

Finally, he hopes that every Chinese person will make a wise choice between good and evil. “Chinese people believe that 'what comes around goes around.' So please treat other people with compassion and be compassionate to yourself. Side with the good people and not the persecutors. You will be rewarded in time.”