(Minghui.org) As Thanksgiving Day is once again celebrated throughout the United States, we often remember the hardships the Pilgrims experienced after the Mayflower arrived in the New World in November 1620. They overcame difficulties, with help from the native Americans, and started this tradition as well as their new adventure.

Today, during this season of giving thanks, Falun Gong practitioners around the world are grateful for the meditation system and its founder, Mr. Li Hongzhi, for the remarkable improvements to their health and lives.

One practitioner in Northeast China wrote to Minghui earlier this month about the drastic changes Falun Gong has brought her.

“My health had deteriorated due to stress and poor living conditions. As early as the age of 40, I suffered kidney infection, arthritis of the neck, heart problems, liver disease, and stomach ulcer.” Years of medical treatment did not help her and the doctor indicated that she could die at any time.

“I looked like a bag of bones. At a class reunion, one of my former classmates couldn't hold back his tears when he saw me. He said that I looked like a ghost,” wrote the practitioner.

After she began to practice Falun Gong in 1996, however, everything changed. “My health improved every day. I could sleep better. I became energetic. My stomach didn't hurt any more when I ate. In a short time all my diseases were gone.” She has remained in great health for the past 19 years without needing any medicine. At the age of 73, she has few wrinkles and can walk several miles without feeling tired, which she often does when distributing flyers in the countryside about the persecution of Falun Gong.

“In 2007, I ran into the former classmate who had said I looked like a ghost. He was even more surprised at my appearance than the last time he saw me. I not only didn't die, but was instead reborn.” Upon learning that all these changes took place because of Falun Gong, her classmate said, “Falun Gong is truly miraculous. It gave you a new life. I will certainly tell all my friends about this.”

After one practitioner's grandmother went deaf at the age of 95, the family was upset, but the practitioner did not lose hope. “I firmly believed that my cultivation could benefit her, so I started to say, 'Falun Dafa is good, Truthfulness-Compassion-Forbearance is good' aloud to her.”

The practitioner's mother reminded her that her grandma could not hear her even if she shouted. But she repeated the phrases again and again anyway, believing they would help her dear grandmother.

“After a while Grandma smiled at me. I said that if she could hear me, would she please repeat my words. Grandma then repeated the words, 'Falun Dafa is good, Truthfulness-Compassion-Forbearance is good,'” wrote the practitioner.

The practitioner's parents could not believe it. Nonetheless, the practitioner told her grandma to recite the sentence several times a day. And she did. “Every time I visited her, she told me that she had been reciting the phrases.”

At the age of 99, the grandmother was once hospitalized with a fever. Doctors and nurses were surprised to find that her heart function and blood pressure were as normal as that of a young person's. She is now over 100 years old.

“Because of Grandma's amazing story, my parents were no longer skeptical about Falun Gong. My dad started to listen to recordings of Falun Gong teachings,” wrote the practitioner. 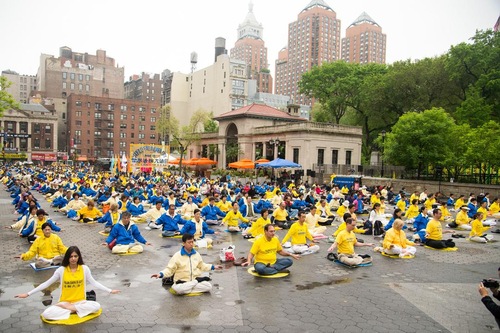 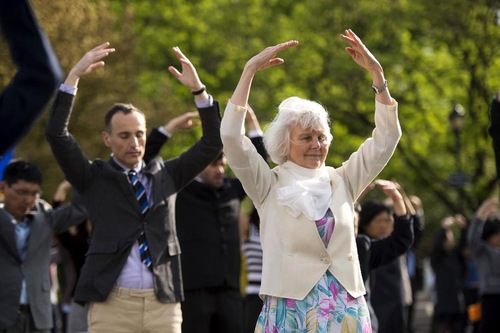 Falun Gong practitioners from all over the world do morning exercises at Union Square in Lower Manhattan, celebrating Falun Dafa Day on May 15, 2014.

A two-week-old newborn was hospitalized for breathing difficulties. Three months later, she was diagnosed with acute pneumonia, and two days of hospitalization did not reduce her fever. The parents then took her to another hospital.

“The doctors spent two more days trying to stabilize her, and said several times that she was in a life-threatening condition.” In the end, the doctors gave up. They prescribed some medicine and released her.

Her parents cried. With nothing more they could do, they left the baby with her grandmother and went back to work in another city.

The grandmother, a Falun Gong practitioner, had faith that her spiritual practice could help and she played audio recordings of lectures by Falun Gong's founder, Master Li Hongzhi.

Gradually, the baby's body temperature returned to normal and she was able to eat baby formula. She was fully recovered within a week.

“I Wouldn't Be Here Today Without Dafa”