(Minghui.org) As the weather begins to get cold in the fall, the number of tour groups drops in Switzerland. However, the percentage of Chinese tourists who choose to quit Chinese Communist Party (CCP) organizations keeps climbing. According to volunteers at Service Centers for Quitting the CCP, located at Swiss scenic spots, many Chinese tourists are eager to quit the CCP and its affiliates, and they have encouraged families members and friends in their groups to quit as well.

Three Chinese women warmly hugged a volunteer at a Quit the CCP service center, thanking her for telling them the truth about the persecution of Falun Gong in China. One said, “We have been deceived badly by the Communist Party, which has wronged Falun Gong. Falun Gong is great! Who ever said you were unpatriotic? Jiang Zemin is a traitor. He should be punished as a public enemy!”

Several tourists rushed over to volunteers as soon as they got off their bus and asked, “Are you Falun Gong? Are you here to help people quit the CCP? Any new developments?” Many tourists took the initiative to quit the CCP and its associated organizations. Some said that they had used software to break through the Chinese government's Internet blockade to access overseas news, and had learned the facts about Falun Gong and the persecution.

On October 26, a volunteer helped about 90 Chinese tourists quit the communist organizations in just one hour. 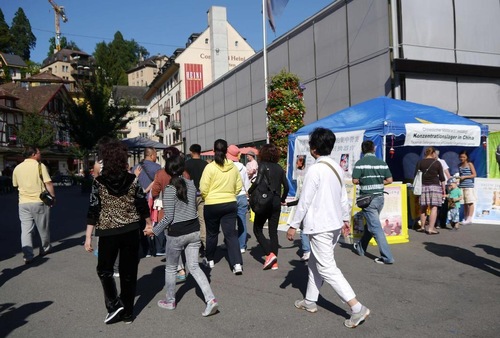 A middle-aged Chinese woman approached a volunteer and asked, “Are you in charge of quitting the CCP?” The volunteer replied, “I can certainly help. Would you like to quit?” She said she wasn't a member of the Chinese Communist Party. The volunteer explained that quitting CCP organizations meant quitting the Communist Youth League and Young Pioneers too. She readily agreed to quit them all, and took a copy of the materials about worldwide lawsuits against Jiang.

An elderly Chinese man who saw the woman leave with the printed materials struck up a conversation with a service center volunteer. After speaking for a while with the volunteer, the gentleman decided to renounce his membership in the CCP.

Other tourists in the same group witnessed the conversation. The volunteer turned to them, “It's a rare opportunity to go abroad. I hope that all of you will bring home peace and safety. Your trip will be really worth, if you do.” The group of seven or eight Chinese said loudly, “I quit. Thank you!”

The elderly man called out to more tourists on the same bus, “Come here. Hurry!” Three more people came over. The man told them, “Come and listen to her. What she said is great!” The volunteer told the man, “Thank you! You have clearly seen the nature of the CCP. I'm so happy for you!” The man replied, “We should thank you! Could you tell them what you have told us?” The three tourists also chose to quit the communist organizations after hearing the volunteer's explanation.

Not long after they left, the elderly man came over to tell the volunteer, “Look! The three people who just quit are telling another group of people to quit. They are helping you out.” When the volunteer approached the group, she heard one of them saying, “Right! We don't want to be fooled by the CCP!”

The volunteer told them about the CCP's organ harvesting from living Falun Gong practitioners, the tide of withdrawals from communist organizations, and about 190,000 Falun Gong practitioners filing lawsuits against Jiang. One of the tourists said, “Jiang is doomed this time. The door of the prison cell is open to him.” Another said, “When Jiang's crimes are exposed, the CCP won't be able to afford to pay for the bloody debt.”

When the tour guide announced that it was time to board the bus, the volunteer gave each person a copy of the introductory materials, wished them safety, and told them to spread the news about quitting the CCP. One replied, “We sure will! We hope that everyone will be safe! Falun Gong is great! Take care!” All the people in the group decided to quit the Communist organizations they had joined before. They left in a happy mood.