(Minghui.org) Separated by the Taiwan Strait, people living in Taiwan and Mainland China come from the same origin and share many of the same traditions. After the Chinese Communist Party (CCP) took power in China decades ago, however, the differences have become more stark. One example is the attitude towards Falun Gong, a meditation system rooted in traditional Chinese culture.

Despite its popularity in China in 1990 that drew about 100 million followers, Jiang Zemin initiated a nationwide persecution against the practice in July 1999. As the suppression continues in China, Falun Gong has gained broad support in Taiwan.

Too Important to Ignore

“What can I do to help?” “Innocent people should not be persecuted—I support you!” Many residents encouraged practitioners after seeing posters about the severe suppression at the railway station in Hualien City. Many signed petitions in favor of recent lawsuits against Jiang.

Over 190,000 Chinese filed criminal complaints against Jiang between May and October for persecuting Falun Gong. More than 770,000 signatures have been collected outside China to support the movement. 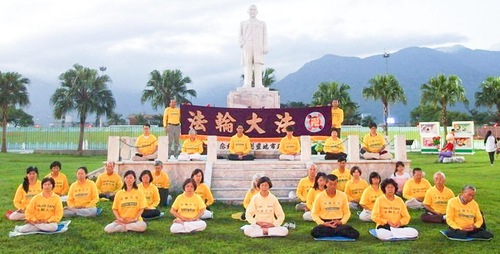 Group exercises by Falun Gong practitioners near the railway station in Hualien City on November 15.

A car rental service business owner near the station said she was not new to the CCP's brutality, “Many of my customers come from China and they told me about lots of things happening there, including how Falun Gong practitioners were mistreated.”

The woman said the massive suppression in China reminded her of the Holocaust and this topic is too important to ignore, “We must say no to this tragedy; otherwise, the CCP's brutality could involve us sooner or later.”

The woman signed a petition calling to end the persecution, and so did her brother and her son.

City Councilor: Justice Will Be Served

Since we are living in the digital age, Wu said, it is unlikely the CCP could cover up their brutality for long, “We are all watching this, even Heaven—we Chinese believe in 'good is rewarded with good, and evil is met with evil'.”

“The Nazis have become history, and so has the Soviet Union,” Wu explained, “A regime that harms people is doomed to fail. That is where we can find hope for China.” 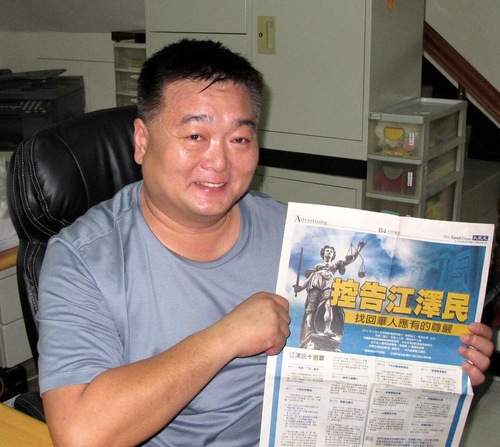 Kaohsiung City councilor Wu Ming-tsz said that Jiang and other key perpetrators would be brought to justice.

Another city councilor Chen Li-na agrees, “We hope the Chinese government will handle the lawsuits against Jiang appropriately. People are waiting to know the truth. The persecution of Falun Gong must stop, and it will likely happen as the totalitarian regime ends.”

“China Fahui | Lighting Up the Darkness: Clarifying the Truth While Imprisoned”