(Minghui.org) Although Falun Gong practitioners have been persecuted for their belief in China for 16 years, some people in the West are still unaware. And like so many people in China, even those who have heard about Falun Gong are often confused about the nature and rationale behind the persecution. Below are some conversations that took place over the weekend when Danish practitioners went to downtown Copenhagen telling passersby about Falun Gong. 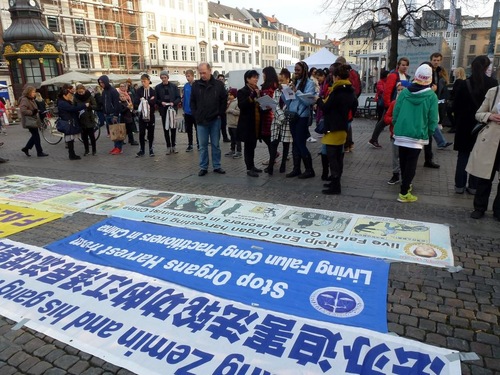 Pedestrians read posters about Falun Gong in downtown Copenhagen over the weekend.

What Has the Communist Party Done to China?

Many pedestrians read posters about Falun Gong and the suppression in China and agreed to sign a petition in support, but one man in particular said he would not sign the petition. He was from Sweden, and in his 50s.

“Do you have any concerns about this?” asked one practitioner.

“Because you Falun Gong said the Chinese Communist Party (CCP) will collapse,” he replied, pointing to a poster, “Just think about it—China has over one billion people, wouldn't such a country be in chaotic without the CCP?”

“I see,” said the practitioner. She then explained that Chinese people did not choose or like the communist party. Instead, the regime was forced upon Chinese. Through the past few decades when the CCP is in the power, it has mistreated a large portion of Chinese people in various political campaigns.

“Right now, almost everyone dislikes the Party,” added the practitioner.

“Well, if Falun Gong has not done anything wrong, why does the CCP ban it then?”

The practitioner thus went on to explained the principles of Falun Gong, Truthfulness-Compassion-Forbearance, as well the mind and body improvement it brings to so many who practice it. “The Party promotes violence and struggle, which contradicts Falun Gong's principles. The CCP likes to control people, and it would ban anything in its way, regardless good or bad.”

In the end, the man nodded, “What you said makes sense. I will sign the petition.” 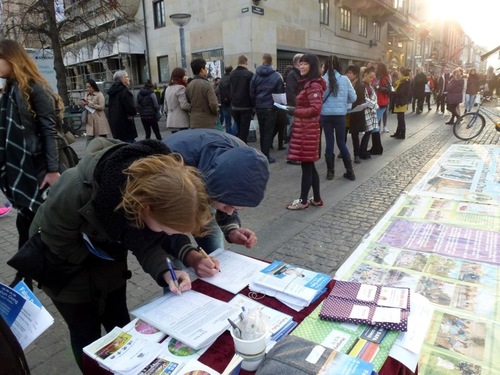 After one Danish man signed a petition calling to end the atrocity in China, he did not leave.

“Please tell me, Jiang Zemin is just one person—how could he start a nationwide suppression like this?” he asked.

“Chinese politics is different from democratic society,” answered the practitioner. Top leaders, such as Mao or Jiang, have dictatorial power and may give orders above the law, “We saw the Cultural Revolution in the past, and then the suppression of democratic movement at Tiananmen Square in 1989.”

“No wonder Eastern Europe gave up on communism,” the man said before he left, “With so many lawsuits against Jiang, I think we know what will happen in China next.” 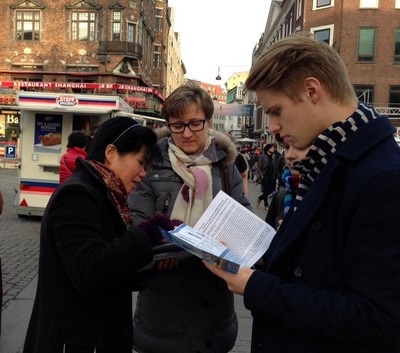 One practitioner explains to passersby the severe human rights violation in China.