(Minghui.org) “Great! Law safeguards justice.” So said a woman named Anna, visiting Helsinki from Italy on October 26, 2015. Falun Gong practitioners set up in the downtown area for two days to collect signatures supporting lawsuits against former Chinese dictator Jiang Zemin. Many passers-by paused to learn about the persecution and signed the petition. 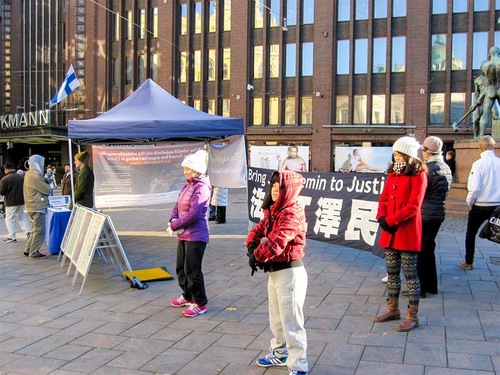 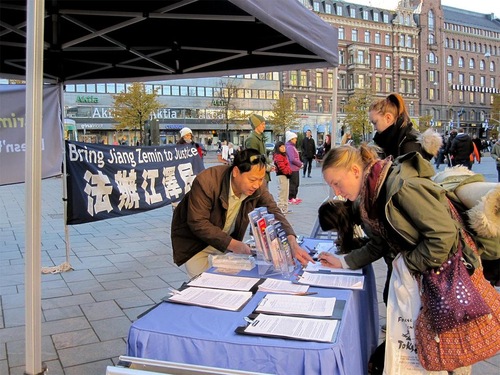 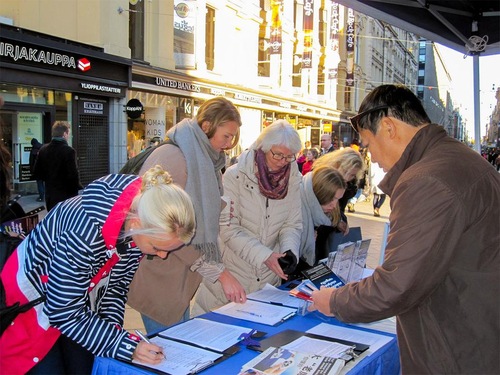 Passers-by sign the petition against Jiang Zemin after learning about the persecution.

Falun Gong practitioners held large banners reading “Stop the Live Organ Harvesting” and “Bring Jiang Zemin to Justice” on a downtown square on October 26. After learning about the brutal persecution, many passers-by expressed support for lawsuits against Jiang.

Anna and Banre from Italy signed a petition to support the lawsuits.

Pauli from Finland said heavily that it was hard to imagine that organ harvesting atrocities have continued in China for over ten years. Jiang must be brought to justice.

He abused his power in orchestrating the persecution, leading to over 3800 confirmed deaths of innocent practitioners due to police violence. Millions of practitioners suffer tortures in prisons, detention centers, and brainwashing centers. Many were even killed for their organs. Jiang Zemin is directly responsible for the inception and continuation of the brutal persecution.