(Minghui.org) “The perpetrators of forced live organ harvesting must be brought to justice,” stated Dr. Madeleine Petrovic, Member of the Austrian Parliament, in a rally on the square of St. Stephen's Cathedral, Vienna, Austria on September 19. The rally against the persecution of Falun Gong in China brought together Falun Gong practitioners from more than 30 countries, with many local people and tourists pausing and listening to the rally. 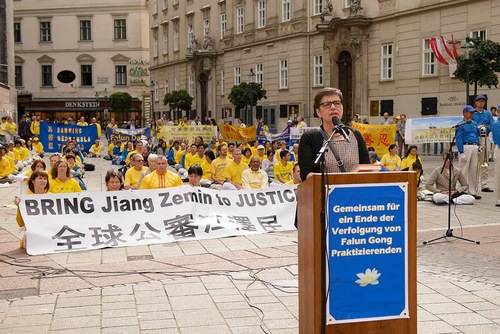 Dr. Madeleine Petrovic, Member of the Austrian Parliament, gives a speech at the rally on the square of St. Stephen's Cathedral, Vienna, Austria on September 19, 2015.

Dr. Petrovic stated, “The crime of genocide is unpardonable. This human rights villain, Jiang Zemin, must be brought to justice.” Jiang launched the persecution of Falun Gong in 1999, resulting in 16 years of brutality against Falun Gong practitioners.

After the rally, Dr. Petrovic received an interview by a Minghui correspondent. She indicated that she spoke at the rally to call for the human rights of Falun Gong practitioners in China. She believes that all Chinese people's human rights have been compromised.

“I think suing Jiang Zemin is very important,” said Dr. Petrovic. “I know how important it is to the families of the victims to sue the criminal.” She said that it was also important for young people to step forward, and encouraged young people in China to not be afraid of their country's totalitarian control.

Dr. Petrovic first heard of the persecution of Falun Gong at the beginning of 2000. She read Chinese Communist Party-influenced news from China defaming Falun Gong and was doubtful. So she sought out information to verify the report. She started to read Falun Gong practitioners' informational materials and talked with them. She became convinced that the practitioners are a peaceful group of people.

As for the Falun Gong principle of Truthfulness-Compassion-Forbearance, Dr. Petrovic believes that there would be no war if everyone followed that principle in daily life. She feels that it should be our ultimate goal. Finally, Dr. Petrovic hopes that all people across the world will enjoy long-term peace.