Taipei: Reenactment Focuses Attention on the Killing of Falun Gong Practitioners for Their Organs

Many residents and tourists who passed by signed petitions calling for an end to the brutality and supporting the lawsuits being filed against former Chinese leader Jiang Zemin.

Ever since Jiang started the persecution of Falun Gong in 1999, practitioners have been arrested, detained, beaten, imprisoned, and tortured. The harvesting of organs from living Falun Gong practitioners, in particular, has garnered widespread attention since it was made public in 2006.

The busiest train station in Taiwan, Taipei Station is located at the center of the city's business district where many office buildings, financial firms, and educational institutions are located. Passersby read posters, took materials, and spoke with practitioners to learn more. 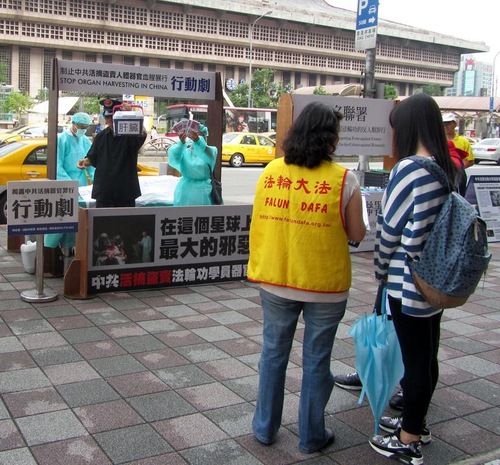 A reenactment at Taipei Railway Station on October 24 focused on the crime of organ harvesting from living Falun Gong practitioners in China.

Mr. Rogelio from the Philippines said he had heard about Falun Gong and the suppression in China. In his opinion, live organ harvesting was “immoral” and “against humanity.”

When Mr. Rogelio heard that Jiang was responsible for the persecution of Falun Gong and that over 190,000 Chinese residents have recently filed criminal complaints against him, he signed a petition to support their efforts. His girlfriend also signed a petition after he talked to her.

“This is probably the most important thing we have done since we came here on vacation several days ago,” said Mr. Rogelio.

Pointing at a poster, Lee said their signatures were important, “We have to do our best to bring these orphans home.”

Mr. Amro from Jordan had never before heard about Falun Gong. He read the posters and listened to a practitioner explaining about Falun Gong and the suppression in China. He signed a petition and said that such crimes were "horrible." “Nobody should tolerate live organ harvesting.” 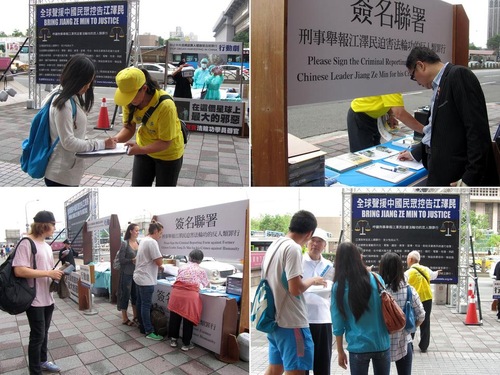 Pedestrians read the posters and sign petitions to support the practitioners.

Many local residents also showed their support. Ms. Hsu, an accountant at a nearby firm, said her friend had already told her about the live organ harvesting. “A government is supposed to protect its people and their property. How could those in power abuse the police force and justice system to mistreat an innocent group like Falun Gong?!”

As she signed a petition, Ms. Hsu said that no one had the right to harm others, “Let alone tragedies like organ harvesting. Jiang will be brought to justice—that's for sure.”

Mr. Zeng works in Taoyuan City near Taipei. While waiting for a friend at the train station, he told a practitioner that he had heard about the suppression on Facebook.

When the practitioner thanked him for signing the petition, Mr. Zeng replied, “My conscience told me to do it. No one should allow this [live organ harvesting] to continue.”

Mr. Zhang asked many questions. He has a business in China and often travels there. He had occasionally heard negative comments about Falun Gong while he was there.

“Thank you so much for telling me this,” he said as he signed a petition. “Now I fully understand what happened. I have to do my part to help.”