Sydney Resident: Practitioners are Clarifying the Facts in the “Best and Wisest Way” 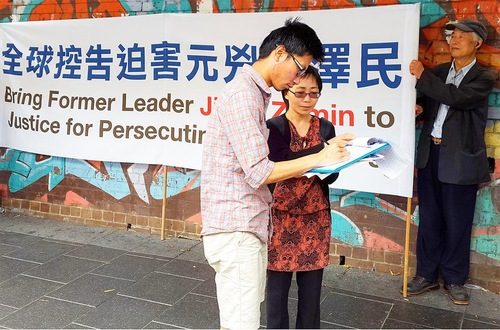 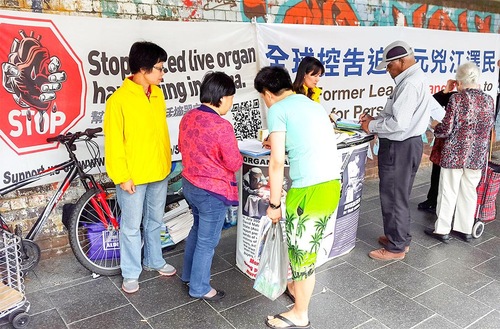 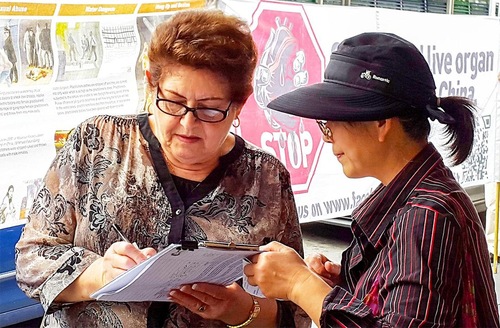 Sydney residents sign to condemn forced organ harvesting from living Falun Gong practitioners in China, and to support the lawsuits against Jiang Zemin.

“Creator Made Us to Safeguard World Peace”

Mrs. Celia Sisler, a vigorous older lady, approached the Falun Gong booth and quickly signed the petition. She said she had heard about the persecution long ago, and signed many petitions. She was saddened to learn that the persecution had been going on for so long, but had confidence it would end someday.

Mrs. Sisler condemned the persecutors, and said those who pretended nothing had happened was a factor in making things worse. Upon hearing about the recent flood of lawsuits against Jiang, she said, “The more people calling for justice, the sooner the evil will be stopped. The creator has given us a mouth, two eyes, and two ears. It means we are here to safeguard the world peace. So we should work together to stop the evil. It's the only way to leave peace to our children.”

The Best and Wisest Way to Clarify the Persecution Facts

Dr. Par had heard about the organ harvesting before, and was saddened by the brutal crime. He suggested putting the petition online to collect more signatures. Dr. Par said, “I support you. Never give up! Keep working on it, and you will win!”

Many Chinese people took this opportunity to quit the Chinese Communist Party, the Youth League, and the Young Pioneers. All of them had learned about the persecuting nature of the CCP. One Chinese young man not only signed the petitions, but also wanted to help hold the banners to show his support.

“Demanding an End to the Persecution of Falun Gong While Xi Jinping Visits the U.K.”