London: Locals Condemn the Persecution of Falun Gong While China's Head of State Visits the U.K.

(Minghui.org) Raj, an immigrant from India, came to England to learn about computer science and currently works at a risk management company. His office is located close to the location of a Falun Gong protest held on October 21, 2015. That day, China's head of state Xi Jinping was having dinner at nearby Guild Hall.

Large banners reading “Stop the persecution of Falun Gong” and “Bring Jiang Zemin to Justice” were prominently displayed. Some of the protesters talked to passers-by about Falun Gong and the persecution, and collected petition signatures in support of their cause.

The busy scene drew Raj's attention. He accepted a flyer and read it on the spot.

The City of London is the heart of the downtown financial area, yet only a tiny part of the entire metropolitan area. Numerous banks and financial companies are located there, and Guild Hall is the administrative center. The streets are narrow. Xi's motorcade passed through the area where Falun Gong practitioners held their banners while enroute to and from Guild Hall. 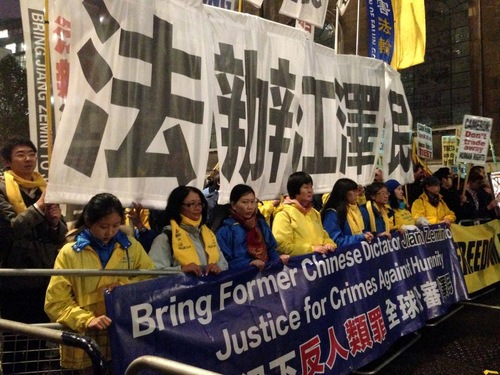 Falun Gong practitioners hold banners near Guild Hall, City of London on the evening of October 21, 2015. 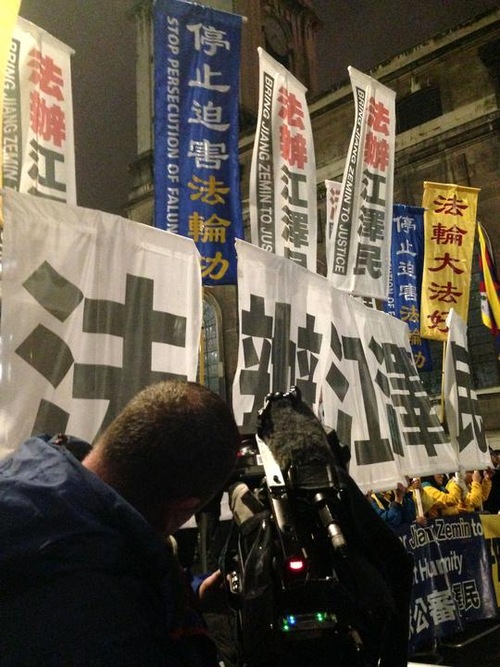 A photographer of a media outlet takes video footage of the protest. The large banner reads “Bring Jiang Zemin to Justice”. 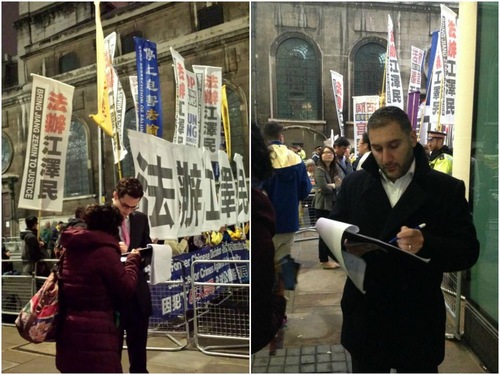 Passers-by bear Guild Hall sign the petition against the CCP's live organ harvesting on the evening of October 21, 2015.

Raj was shocked to learn about the organ harvesting atrocities taking place in China where Falun Gong practitioners are custom-killed for their organs in illicit organ trade. He was also surprised that he had not heard about the situation in the media.

“Media control is so tight,” said Raj, “I have never heard of this before. Millions of people are persecuted. But there is seldom any report in the media.” “I know that the Communist Party and its army attempt to control everyone, out of paranoia,” he said.

Regarding Xi Jinping's visit, Raj said Xi should do two things right away, “First, he should disassemble the '610 Office' (an organization in charge of persecution of Falun Gong that he just read from the flyer). Second, stop the persecution. History cannot repeat.”

It was afternoon rush hour. Many people were leaving their offices to make their way home. Practitioners passed out flyers, talked to people about Falun Gong and the persecution, and collected signatures on a petition.