Practitioners were lined up in rows for two blocks while flickering candlelight and solemn music accompanied heartfelt memorial speeches. 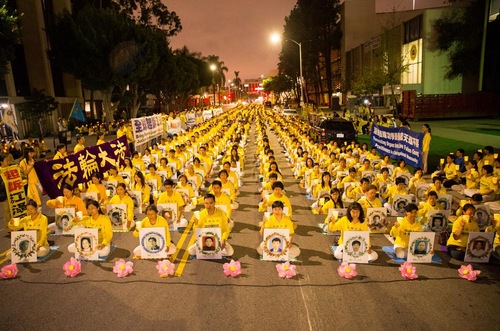 Falun Gong practitioners held a candlelight vigil next to the Chinese Consulate in Los Angeles.

Music Composer Honored to Give a Voice to Persecution Victims

Mr. Chen Dong, one of the speakers at the vigil, was the composer of the music in the documentary “Free China: The Courage to Believe”, which won the Hollywood Music in Media Award. The documentary features the stories of two Falun Gong practitioners who had been tortured in China for their belief.

Mr. Chen told the reporter he was glad to be able to speak for the persecution victims. He said, “Those who hear about the persecution will choose to stand on the side of justice. In America, we can openly take a stand. However, if you express the same idea in China, you would have to face torture and even organ harvesting. It takes great courage to file lawsuits against Jiang Zemin (the former dictator in China who started the persecution). Compared to our fellow practitioners in China, we have done so little.” 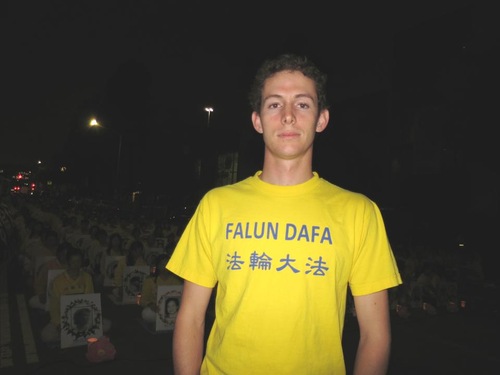 Miles Sejni started practicing Falun Gong four years ago. He said he believes all good virtues are related to Truthfulness-Compassion-Forbearance, Falun Gong's core principles. Regarding the recent movement in which persecution victims have been filing criminal complaints against Jiang Zemin, Miles said, “Our hope is to bring Jiang to justice. In the states, a president would be punished if he committed any crime. Jiang launched this brutal persecution. He certainly should be held responsible.”

Albert Roman, one of the organizers of the vigil, said, “The Chinese Consulate is the best place for us to voice our request to bring Jiang to justice.” Albert said an average of four to eight local Falun Gong practitioners have been persistently protesting against the persecution in front of the Chinese Consulate every day for the past 16 years, even though some of them travel several hours to get there.

Instead of furious protesters, you would see a few quiet, elderly practitioners distributing flyers and telling people about the persecution in China.

The day after the vigil, Falun Gong practitioners in Los Angeles went to protest in front of the Chinese Consulate, as they have been doing for the past 16 years, rain or shine.

Through interactions with these Falun Gong practitioners, consulate employees, nearby residents, and the Chinese people who visited the consulate have gradually changed their view of Falun Gong, having seen through the CCP's lies. Most of these practitioners are in their 60s or 70s. They have to take buses for two to four hours each day to get to the consulate.

Mrs. Lin Yinghua, a 78-year-old former professor of a university in southern China has spent five to six hours each day protesting at the Chinese Consulate ever since the persecution began in China. She also has to take care of her elderly father every day.

“Winter is mild in Los Angeles, but summer days are the hardest, with the burning sun...If I find any extra time, I would go to a tourist spot to tell people about the persecution of Falun Gong.” She doesn't look like she is in her late 70s. She said she feels the joy of cultivating Truthfulness-Compassion-Forbearance. “This is the reason I have been able to keep doing this,” she said.

“The Chinese Consulate changes their employees every three to four years. I have seen five groups already. Some of them are friendly and would thoughtfully warn us about their surveillance cameras. Some aren't that friendly. The people who live and work nearby are nice to us. The police are nice to us too, and protected us when the Chinese Consulate tried to interfere with what we do.”

Mrs. Lin witnessed the changes in people's attitude over the years. “It's getting much easier for Chinese people to decide to renounce their memberships in the CCP and its affiliated organizations of the Youth League and Young Pioneers,” she said.

She added, “Most people who come to the consulate for business are very friendly to us, and some have asked for flyers. There are always Chinese who renounce Communist organizations through us every day. The consulate employees have changed too, and some even greet us.”

These events in Los Angeles are representative of what Falun Gong practitioners all over the world are doing to spread the news of the persecution.

Now, more than 191,000 practitioners in China have filed lawsuits against Jiang Zemin.