(Minghui.org) Today's news from China includes incidents of persecution that took place in 16 cities or counties in 8 provinces. According to this report, 13 Falun Gong practitioner were subjected to mistreatment during detention, at least 46 practitioners were illegally arrested and detained, one practitioner was sentenced to prison. 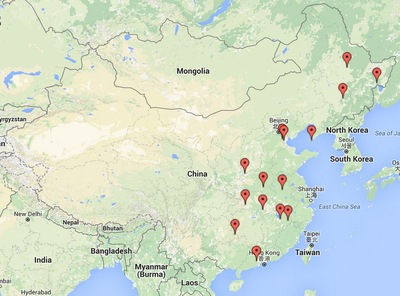 Twenty-nine Falun Gong practitioners were arrested by officers from the Domestic Security Division of Mishan City Police Department on the morning of September 23, 2015. They were having an experience sharing meeting. Mr. Zhang You, Ms. Wang Guixing, and Mr. Ji Hongbo were among the arrested.

Mr. Chen Dejiang, Ms. Yang Dahe and her daughter were arrested on September 26, 2015.

Mr. Li Jianrong couple, Mr. Lin Bo, and other Falun Gong practitioners in Shaping Town were arrested at home on September 21, 2015. Police seized their computers and other personal belongings.

Mr. Yao Genshang was arrested on the evening of September 23, 2015. He is held at the Mianchi County Detention Center.

Ms. Zhang Ling of Yiling District was arrested for telling others about the ongoing persecution of Falun Gong practitioners. She was sentenced to three years in prison on May 4, 2015. She has been held at the Yichang No. 1 Detention Center since her arrest.

Ms. Li Yunpei was arrested at home at noon on September 22, 2015 by Yang Te, director of the Jingzhou 610 Office, and officers from the Hengjiangqiao Township Police Station. She was taken to the Huaihua Brainwashing Center.

Ms. Yang Lifang was arrested on the morning of September 25, 2015 by Qin Zhiwei, director of the Domestic Security Division and officers from the local police station. Ms. Yang, in her 50s, works in the Suiling Forestry Division.

Ms. He Guihong was arrested for posting fliers about the persecution of Falun Gong practitioners. Officers from the Shihaoqiao Police Station held her at the Xianan District Detention Center for nine days before sending her to the Banqiao Brainwashing Center. She was physically abused, lost the ability to walk, and could not take care of herself. She was transferred to the Xianan District Detention Center on September 10.

Ms. Lu Chunyu was arrested for filing legal complaints against Jiang Zemin. Officers from the Ershilipu Police Station broke into her home and arrested her on September 25, 2015.

Ms. Yang Yunxiang was arrested at home on September 23, 2015. Li Yongchao and other officers from the Haibin Police Station of Dagang Oilfield broke into her home and took her to the Dagang District Detention Center for a 10 day detention.

Ms. Niu Guifang, 54, was released on July 19, 2015 after serving three years for practicing Falun Gong. The long-term torture she suffered at Liaoning Province Women's Prison took a toll on her heath. She had trouble walking and seeing after she was released.

Longtan District Court sentenced Ms. Huang Xiuhuan to three and a half years in prison on August 26, 2015 without informing her family. Ms. Huang has appealed.

She was held in the Jilin City Detention Center for 11 months before the trial was held. The detention center officials denied her family visits.

She was arrested for distributing Falun Gong calendars on November 14, 2014.

Ms. Deng Lijuan and Ms. Chen Xiuyun were arrested in August 2015 for distributing Falun Gong informational materials in another city. Ms. Chen was released, but Ms. Deng is being held in the Yanji City Detention Center. Her father was denied visiting her on August 24.